A Japanese native whose passion is to learn Russian history and culture. That’s what best describes Kento, a participant in ITMO’s summer school in Russian language and culture. His keen interest in learning Russian and becoming a professional translator left us in awe. We got the opportunity to catch up with him and learn all about his experiences in our city. From enjoying the city’s observation decks to getting lost in the grandeur of the Hermitage, let's dive deep into the life of Kento Hasegawa. 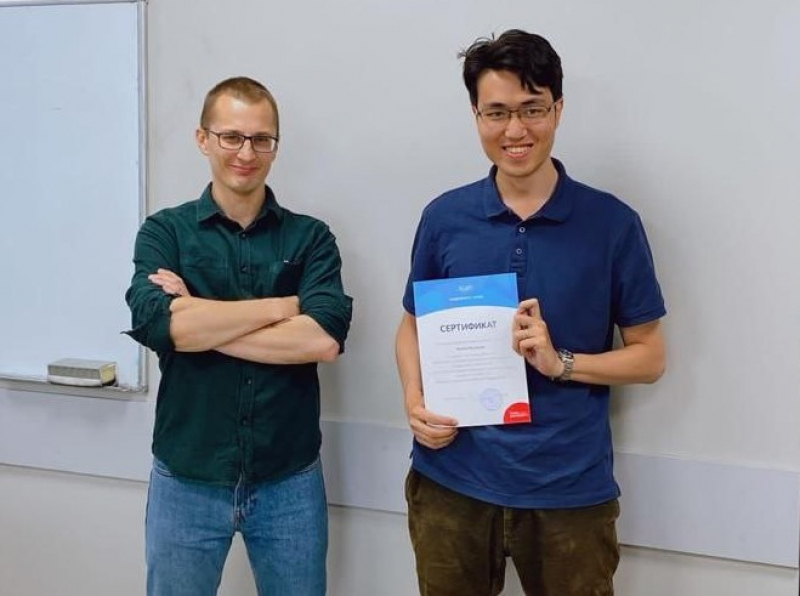 Kento Hasegawa with a representative from ITMO's Foreign Language Training Center. Photo courtesy of the subject

Could you introduce yourself to our readers?

I am an international student from Japan who has been living in Russia for the past 11 months. I am a full-time student learning Russian language at the Diplomatic Academy of the Ministry of Foreign Affairs of the Russian Federation in Moscow. Recently, I visited St. Petersburg to participate in a summer school at ITMO where I studied Russian history and politics. My passion is to become and work as a translator.

What was the structure of the summer school like?

The summer school started off with some lectures on the Russian language. We were divided into several groups based on our language proficiency (beginners to intermediates). Intermediates and experienced learners then went on to study Russian history, culture, and politics while the beginners continued learning the language. I belonged to the intermediate group and hence progressed to the next level. It was difficult for me to follow everything at first, especially the part about diplomacy and politics. But the teachers were patient and helpful. Overall, It was a very enriching experience. I learned so many new facts about the Russian Empire.

How comfortable are you with speaking Russian?

I won’t say that I can speak very well, but the progress has been significant. When I first arrived in Moscow, I couldn’t say a word. I had a challenging time communicating with my roommates and teachers. But now I have improved a lot and feel very confident.

Why did you decide to study in Russia?

I share a special connection with Russia and that is mostly because of my mother, who comes from the city of Harbin in China. Harbin is the northernmost province of China and has the most Russian influence, which is pretty evident in its architecture. I was always eager to learn about Russian history and culture, hence this decision.

What were your major takeaways from the school?

The lectures were very helpful, but that’s not all. We learned several soft skills like teamwork and cross-cultural competence. I got the opportunity to network with many international students from India, Germany, and Korea. So, I did gain some essential skills from this school that will help me in the future. Of course, I learned a lot about Russian history, culture, and politics.

Did you have fun?

I had a lot of fun! When I came to St. Petersburg, I was under the impression that I would attend the lectures for three hours a day and then go back to my hotel. But I was utterly wrong. The staff at ITMO had planned so many activities for us. One day, we cooked Russian dishes together with our teachers. It was so much fun! I also visited many museums and parks during my stay.

Where did you live in St. Petersburg?

I lived in a capsule hotel close to ITMO’s Lomonosova campus. It was very exciting for me to live in a pod. It was really calm and cozy inside, and comfier than I had imagined. It has such a futuristic vibe to it. It feels like you are in a spaceship!

And what were your favorite places here?

I really liked the Hermitage and the Catherine Palace. I witnessed the opening of Palace Bridge at midnight. It was such a fantastic experience.

What was your most memorable experience in St. Pete?

I went to an observation deck in St. Petersburg. It was located on top of an eight-story building. The view from the top was thrilling. I could see the beautiful monuments in the city all at once. Then there was the river Neva, flowing with guile, unbothered. Seeing so many people on the streets, going about their lives was lovely. It has to have been one of my favorite moments here.

Watching a football match at the Gazprom Arena was another one of my great experiences. It was a league tie between Spartak Moscow and Zenit Saint Petersburg. Such a mouth-watering encounter it was! Very satisfying.

Yes, I did. I enjoyed eating borscht and pelmeni. I found Russian salads and soups very yummy too. I don't remember the names, unfortunately. The food is cheaper in St. Petersburg than in Moscow. So, that’s a plus.

And how did you find the Japanese food in St. Petersburg?

There are many Japanese restaurants here, but none of them are authentic. However, they are decent. Honestly, I have found more authentic Japanese food in Moscow than in St. Petersburg.

I would like to pursue higher education in international diplomacy. I find it very interesting. Maybe I will go to the U.S. to study. After graduation, I would like to be employed in a diplomatic job and work as an interpreter.