Twelve students and faculty members of ITMO University have recently taken part in the Japanese-Russian exchange program that focused on working with disabled people. The week-long exchange program was organized by the Japan Russia Youth Exchange Center with support from the Japanese Embassy in St. Petersburg. In Tokyo, the participants of the exchange program attended training sessions, visited rehabilitation centers, studied the approaches to creating an accessible environment for people with disabilities in museums and public transport, and even visited their homes. In an interview for ITMO.NEWS, Andrey Zlenko, Head of the Department for the Development of Student Initiatives, and Natalya Startseva, graduate of the “People Need You!” program, spoke about the Japanese technologies that have to do with developing an accessible environment for people with disabilities, and the difference between volunteering activities in Russia and Japan. 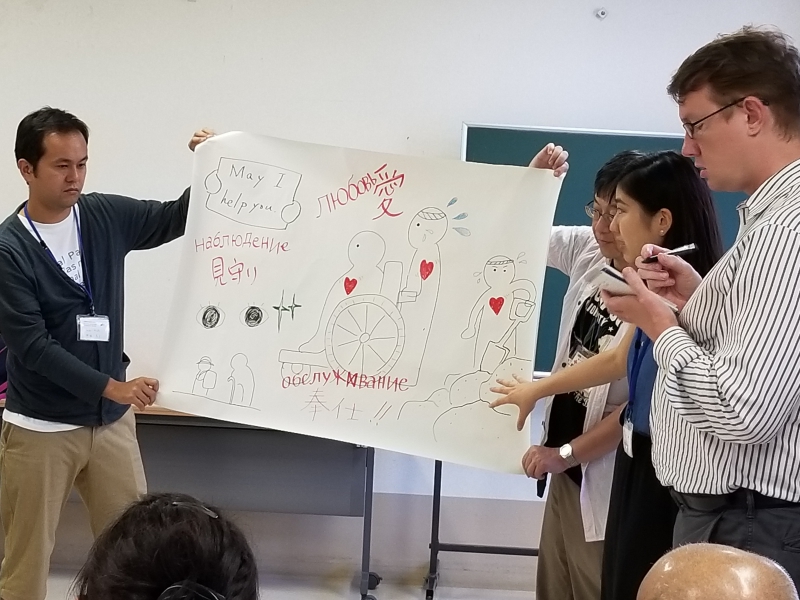 Tokyo regional center for promoting IT for people with disabilities. Credit: personal archive

Andrei Zlenko: Still, the sky’s the limit, and the Japanese continue working on improving accessible environments. For instance, the currently used folding tramps are hand-operated, so engineers are developing automatic ones. Taxis are now fixed with special equipment that makes it easier for wheelchair users to get into the car, but the Toyota company sees that method as not comfortable enough, and is currently developing taxis with retractable ramps that would allow to get in the taxi without leaving the wheelchair. All these new inventions are being designed in preparation for the 2020’s Summer Paralympic Games.

Natalya Startseva: They have a law in Japan that obliges organizations to create an accessible environment for people with disabilities and employ people from this category. Those who don’t comply with these rules have to pay fines; they also have a special organization that supervises the execution of laws that have to do with employing handicapped people.

Natalya Startseva: The Japanese have been implementing a policy on helping their disabled people since the 1970s, but it was only in the recent 20 years that they focused on the development of an accessible environment. In this time, they succeeded in creating an accessible environment in public transport, on the streets and in their homes, and their legislation has changed in order to better meet the needs of disabled people. What’s more, the Japanese government spends a lot on healthcare in general.

Natalya Startseva: We visited one girl who is a wheelchair user, and they showed us the basic mechanisms that make the life of handicapped people easier. In Japan, there’s a municipal program for fixing residencies with special equipment for handicapped people at their request. For instance, they showed us a special remote-controlled device that is used for moving one’s body from the wheelchair and into the bed.

Natalya Startseva: At one of the seminars we attended, they explained to us more about what makes someone handicapped. First of all, they asked us to describe what we think they are, and after the seminar, we had to write a new explanation. The difference was huge. During the seminar, we answered leading questions, and then watched a video about a healthy person who lives in the world of handicapped people. This person faces various problems: in the streets, people communicate with him in sign language he doesn’t understand, he can’t get a taxi, as they are designed for people with health limitations only, and he can’t get a job because as they tell him that jobs are meant for such people only. This way, they showed us that being handicapped is not a particular person’s problem but the problem of the environment they live in. If the environment is not adapted for one’s needs, such a person feels inferior.

Andrei Zlenko: One of the lectures was given by a blind girl who carried a special device for reading which is based on Braille script; the girl read information from it. In Japan, they have experts who consult people who’ve just become handicapped and experience the psychological barriers and stress that are associated with a disability. Such specialists help them adapt to their new condition. The lecturer was such a specialist who’s working with disabled people and provides them with psychological support.

Rehabilitation and sports for the disabled

Natalya Startseva: We’ve been to a rehabilitation facility for handicapped people which places much focus on sports. This is a really great place that offers lots of opportunities. For instance, we learned about basketball for wheelchair users, table tennis for the blind and so on. When speaking about sports for the blind, one has to understand that they have a lot to do with hearing things. In the nearest future, the center’s organizers want to introduce trampoline sports for people with health limitations.

Andrei Zlenko: The most interesting thing was goalball (which is an official Paralympic sport), where a team of three has to throw a ball that has bells embedded in it into the opponents' goal. Goalball was developed after WWII with the purpose of helping visually impaired veterans. This game focuses on the sense of hearing, as well; the field is also marked with special stripes that the players can feel to know where they stand. To pass the ball to a player, you have to say their name out loud. Goalball is a great game for team building, as you have to understand your partner really well if you want to win.

Natalya Startseva: It’s great that their government funds this center, as it has many great subdivisions. For instance, they have a college for training personnel who work with disabled people, a research center that studies particular issues associated with the handicapped in order to provide effective rehabilitation that makes use of modern technical means.

Volunteering for the handicapped people

Natalya Startseva: The exchange program included a meeting where we spoke about volunteering activities for the handicapped people that are conducted in St. Petersburg. We told our colleagues about three projects that are currently being developed.

Andrei Zlenko: We communicated with representatives of organizations that use volunteers, for instance the Japanese Red Cross. They were quite surprised to learn that we have many students who work as volunteers. In Japan, few students are involved in volunteering and project activities. Another major difference in Russian and Japanese volunteering activities is that in Russia, companies that use volunteers provide them with some minimal benefits, for example they feed them or cover their transport expenses. In Japan, volunteers have to provide for themselves. The activities that volunteers are usually engaged in are also different in Russia and Japan; in Japan, they mostly focus on such issues as dealing with damage from natural disasters, cleaning the streets and such, we don’t have anything like that in Russia. On the other hand, they don’t have as much event volunteering as we do. As of now, the Japanese are getting ready for the 2020 Paralympic Games, and they are concerned that they don’t have such a tradition.

Tokyo regional center for promoting IT for people with disabilities

Natalya Startseva: At the center, they showed us many unique devices designed for people with health limitations. Among their top inventions are smart noise-attenuating headphones.  Those can help people focus on listening to the person they are speaking to by suppressing the noise around them. We also got to see new exoskeleton designs. The Japanese engineers have a goal of creating exoskeletons for people who have no arms and legs. Another curious thing we saw was how the center’s employee who is bedridden works remotely by using a segway with a tablet attached to it.

Andrei Zlenko: People with health limitations come to his center for rehabilitation equipment. If the equipment they need has already been developed, they can purchase it at affordable prices, if not, the center’s engineers start working on a new solution.