ITMO University’s team from the Creative Robotics Laboratory of the School of Computer Technologies and Control have for the fifth time emerged winners of the Baltic Science and Engineering Competition. The main prize in the robotics category went to Vasily Dunaev and Dmitry Kharlapenko from the Presidential Physics and Mathematics Lyceum №239, who presented a model of an autonomous system capable of looking after easily-damageable fruit and berries and delivering them to customers when ripe. It wasn’t the first win for their Strawberry Fields project, who’d already claimed first place at the World Robot Olympiad 2018 in Thailand. ITMO.NEWS met the team to talk about how they prepared for the competition and what they expect to come of their project in the future. 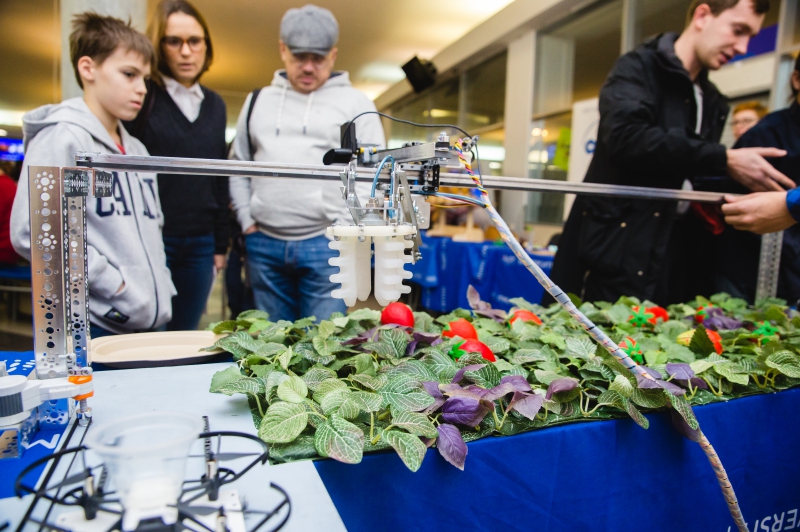 Baltic Science and Engineering Competition: exhibition of projects with over 3,000 attending

This year, the Baltic Science and Engineering Competition (BSEC) celebrates its milestone 15-year anniversary, as the contest has been held annually since 2005. According to the organizers, now it’s one of the biggest scientific contests for school students in Russia, combining strict selection of projects by scientists and university lecturers with modern traditions in the organization of scientific events.

Organized by the Time For Science foundation and the Laboratory of Continuous Mathematical Education, the competition’s annual participant pool includes over 500 young scientists from all over Russia, with more than 400 eminent judges and 3,000 guests ranging from St. Petersburg’s school students to university representatives and heads of companies appraising the inventions. The organizers note that what makes BSEC different from all other similar contests out there is that it succeeds in bringing together schools, science and business on one single platform.

The judges panel consists of several hundred experts, including three DSc members of the Russians Academy of Sciences and over 90 candidates of science. It is the judges who perform the honorable function of awarding BSEC diplomas and the main prize of the competition, a crystal ball called ‘Perfection as a Hope’.

Participation in the competition

BSEC is held in ten categories: maths, physics, engineering, physiology and medicine, ecology, biology, programming, robotics, and geosciences. As per the main rule of the competition, participants can only present non-abstractive research and projects that include an element of scientific discovery or come as a completed technical device.

The young researchers who made it to the finals participate at a special exhibition, giving up to 20 presentations on their project a day. On a designated day, their booths are attended by the judges, who are thus choosing candidates to be awarded main prizes of the competition. The participants’ task here is to defend their invention and, in an open dialog with the judges, prove that it does pertain to scientific discovery, offers new methods of solving a specific problem, and has practical significance. In this way, contestants learn to build their scientific and business career.

Generating consequential buzz among the regular public, BSEC is attended by hundreds of guests, business people, journalists, and programmers them. They can talk to contestants and, based on their example, evaluate future prospects for the specialist market and levels of education and skills of modern school students, as well as scout for the most interesting projects. In addition to the award, participants with the best projects get an internship at one of the visiting enterprises. These companies also take the exhibition as an opportunity to present their innovative developments.

Claiming the main prize in the robotics category this year were the trainees from the Creative Robotics Laboratory of ITMO University’s School of Computer Technologies and Control, eleven-graders at the Presidential Physics and Mathematics Lyceum №239 Vasily Dunaev and Dmitry Kharlapenko. The Creative Robotics Laboratory project is co-organized by ITMO with the Presidential Physics and Mathematics Lyceum №239. Coached by ITMO’s Igor Lositskiy and Evgeny Zavarin, the team presented a model of an autonomous system which can attend to fragile kinds of fruit and berries, pick them up when ripe and then deliver them to the end customer.

Strawberry Fields is a smart fruit patch that grows strawberries. What makes it special is that it’s handled by a robot, which operates a camera and a neural network to locate the berries and identify how ripe they are, and uploads the map of the patch to the internet. Using a special app, consumers select the berries they like, which is then readily picked by the robot and dispatched via a quadcopter which delivers the berries.

The main special feature of the project is the state-of-the-art technology it uses. Soft Robotics embodies a soft capture mechanism and a system capable of independently growing all types of plants aided by neural networks and real-time databases. The project was prepared especially for the 2018 World Robot Olympiad (WRO), where it ended up taking first prize in the Senior High age group. According to the team members, the making of the project, from developing the idea to its implementation, took them half a year.

“Last year’s WRO topic was ‘Food Matters’. So we came up with an idea of a system that could pick easily-damageable objects such as strawberries. We understood from the very get-go that it was a more complex system we should have been aiming at, as the age category we participated at called for sophisticated solutions to unconventional tasks. And the task we were working on was indeed very interesting, and to a large extent unsolved,” shares Vasily Dunaev. “After the initial concept was decided on, we started looking for different options to implement it. The solution arose from ITMO University’s Chem-Bio Cluster: professor Ekaterina Skorb told us about the Soft Robotics technology, and the staff gave us small samples to play with. We took inspiration from that advice but did everything on our own after that. The capture mechanism you now see on the robot is the final product developed by us from start to finish.”

The team’s time at the BSEC was dedicated to present their project both to the science and business judges panel and guests of the competition.

“Despite the impressive number of fairs, contests and championships we already have under our belt, BSEC too provided us with valuable experience. We managed to talk with a wide range of experts from different fields, and they asked us interesting questions, including those related to practical aspects of our invention,” adds Vasily.

Prospects for the project

The invention could be useful to the farms dealing in the commercial growing and harvesting of berries. As noted by the team members, as a model the system is fully complete, but they’re more than ready to adapt it to a real-world industrial sample should the businesses be interested.

“Working on this project, we pursued the goal to develop a model of such a system; to write a neural network that identifies the ripeness of the berries, to create an appropriately soft capture mechanism, to connect it to a drone that would pick the berries up and deliver on the sale made via an online app,” says Dmitry Kharlapenko. “But maybe our development will be interesting to those involved in the commercial growing of berries. The project is mostly aimed at strawberries grown in controlled conditions, in greenhouses as an example. And it was this question of practical feasibility and viability of Strawberry Fields that was at the evaluation of the business judges, who, just as science judges, went from booth to booth appraising projects.”

Later in 2019, the team will take their project to another of the largest competitions in robotics, RobotChallenge-2019, which is to be held this August in China. To gear up for this big outing, the young inventors plan on further improving their project by including an additional degree of freedom to the handling mechanism and making a local database. Strawberry Fields currently operates on Google data, but as the service is blocked in China the authors have to come up with other options. The team also has another project they work on parallel to their smart patch venture, which is to be unveiled at the RoboCup tournament in Australia.