In the spirit of the Kid Inventors’ Day celebrated all over the world on January 17, we at ITMO.NEWS have joined our forces with the ITMO.KIDS Technopark for Children to present five devices that are easy to do at home. All of them have different uses, from doing household chores to playing games or just being very  instagrammable . A hydraulic powered robotic arm, a smart pet feeder, and an air balloon able to pull off a launch into the stratosphere: read on and start creating! 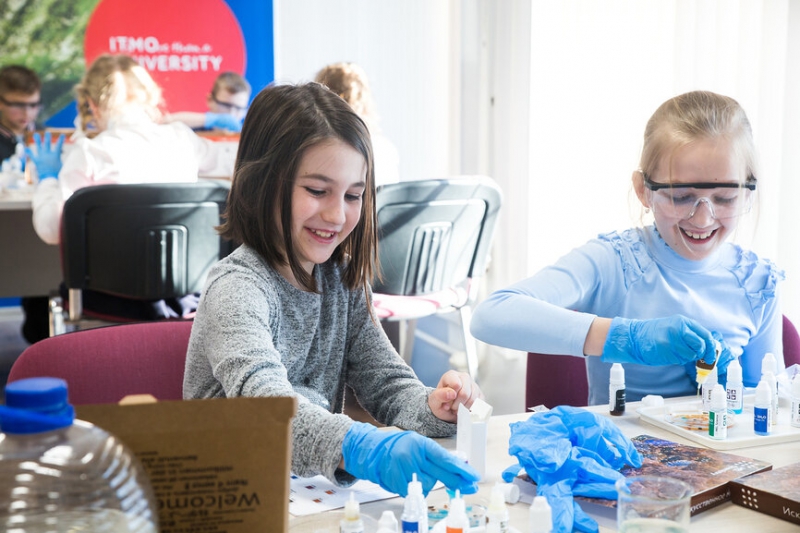 For kids starting from: 10 years old

Things you need: water, cardboard, glue, a knife, and several toothpicks and syringes.

Start by cutting a couple of rectangles from cardboard, then fasten them together using glue and toothpicks. Add in the syringes and you’ll get the basis for your arm contraption.

Then proceed to building a second structure, which will enable the whole contraption to move. As with first one, cut the basic parts from the cardboard and fix them with four syringes filled with water. Connect all the syringes with wires and there you have it: an interesting toy you can puzzle your pet with.

2. Trash bin that opens and closes the lid by itself and reports when it’s full

For kids starting from: 13 years old

Things you need: two ultrasound sensors, a metal servo motor, and a microcontroller (all these tools can be bought in specialized inventor shops).

Take a regular trash bin and equip it with several devices. Start by securing a metal servo motor, which will be responsible for opening the lid, and a sensor, which will take notice of how full the bin is, to the latter’s interior. As soon as the amount of trash is too much for the bin to handle, it will open its lid to give you a heads up. After you’re done with the inside part, place an ultrasound sensor on the bin’s exterior. It will react to your movements to open and close the trash bin’s lid accordingly.

The whole system is managed by a single microcontroller, but to make it all work you’ll need to have basic knowledge of programming. You can study on it yourself or opt for enrolling into robotics courses offered by ITMO.KIDS.

For kids starting from: 13 years old

Things you need: a motor, controller, and screw conveyor.

Just as with the trash can, you have to secure the mechanism’s parts on the feeder. Attach a screw conveyor to the motor and place it all over the feed, so that the conveyor moves and presses the feed out. The problem with this system has to do with timing. That’s what you need a controller for. Connect it to the motor and set the time to when you want your pet to get its food. The system can be charged using a power adapter or an electrical outlet.

For kids starting from: 15 years old

Things you need: a microcontroller, relay (an electrically operated switch) and sensors.

The project should be carried out under parental supervision as it implies working with high voltage. Connect the relay to the light switch that is controlled with the use of a microcontroller. Make sure that you have switched off all the light in your apartment in order to avoid short circuit failure.

In addition to the relay, you also have to attach the sensors. The system works like that: the sensor catches a movement, sends the signal to the relay, and it turns the light on.

You can try using different types of sensors to make the system work. For example, a movement-detecting sensor, a sonic sensor, and others. Apart from that, there are other ways you can send the signal to the controller. For one, you can use a remote control or an app on your phone, but this method is a little bit more difficult.

5. Air balloon you can launch into the stratosphere

For kids starting from: 16 years old

Things you need: a balloon, a GPS module, a GPRS transmission unit, a microcontroller, a GoPro camera, batteries, helium

Start by filling a special big air balloon with helium, which will expand in the course of the flight. Attach a container with a GoPro camera, a GPS module, and a GPRS transmission unit to the end: they will identify the balloon’s coordinates and send them to you in the form of a text. Add to that a microcontroller, which allows for the system to work, and batteries, which will power the whole device. Watch the video (in Russian) for full instructions. The balloon you get as a result is capable of rising 37 km above the Earth, after which it will sadly fall back down. But the good news is that you will able to find the camera afterwards thanks to the GPS and GPRS devices.