On April 25, ITMO University held the partner university exhibition Student Fair. Representatives of Télécom ParisTech, Bordeaux Montaigne University, Özyeğin University, and other leading universities spoke with students about international mobility and Master’s degree programs. In this article, you’ll find all the necessary info about short-term and semester exchange programs and other great opportunities for students at ITMO University. 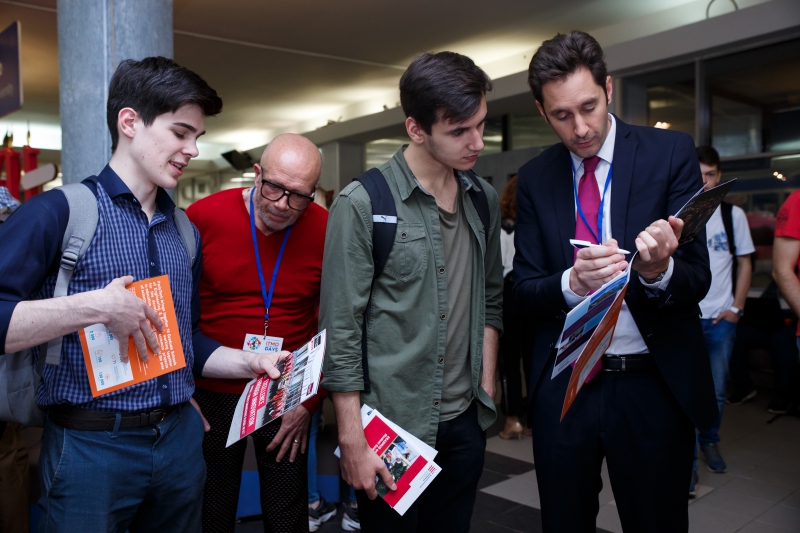 The members of ParisTech differ in their areas of study: Chimie specializes in chemistry, materials science, and engineering, while MINES’ area of expertise is mathematics and communication technologies. Another institution, ENSTA, puts an emphasis on industrial relations and develops joint projects with the likes of Shell, Dassault Systemes, Total, and others.

ParisTech coordinates the enrollment of international students into each of the institutions and facilitates informational exchange among educational institutions. If, for instance, Ecole des Ponts, having received a talented student’s application, recognizes that a program at another university, like AgroParisTech, would be more fitting for the student, its staff will forward the applicant’s information to the other school.

“We believe that the knowledge we offer is in demand among many international companies,” explains Fethi Bedioui, the research director of CNRS at Chimie ParisTech. “And we’re offering Russian students an opportunity to acquire the top skills and knowledge the European scientific community has to offer. The way that we think, work with others, and communicate – it’s all different in students from Russia, France, and Brazil. The more cultures a specialist has familiarized themselves with, the more valuable they are as an employee.”

ITMO University students can go on one- or two-semester exchange programs at all of the ParisTech member universities. Representatives of the French consortium are also currently developing a double-degree Master’s program for ITMO students.

France was also represented by Bordeaux Montaigne University, which was ranked among France’s top 5 places to study in 2014. The University is in close proximity to the Pyrenees and the Atlantic Ocean. Bordeaux Montaigne offers a wide selection of programs including  Information and Communication, Land and Town Planning and Development, Multimedia Industry and Internet Technology, and others.

Thanks to a special agreement between BMU and ITMO University, students of the latter will find it much easier to apply for exchange to the French university. All you need to do is submit an application and a letter of motivation according to the rules prescribed by ITMO’s International Office.

Getting into a Master’s program may prove more difficult, as it requires applicants to be proficient in French at level C2 or above. Learn more here.

This Istambul-based university is among the top-4 higher education institutions in Turkey. More than 7,000 Bachelor’s, 700+ Master’s, and 200+ PhD students study here. The university’s choice of programs ranges from aviation to food science and physics. Statistics show that Özyeğin University has been a leading university in terms of satisfaction among international students for two years in a row.

“Özyeğin University has only been around for ten years, but we are quickly rising in the international rankings and taking part in the Horizon 2020 program,” explains Miraç Özar, the director of Özyeğin University’s International office. “Of course, politics do affect scientific work in Turkey, both positively and negatively. But that should not stop us from strengthening our relationships with other universities, especially Russian ones, as Russia is rife with great specialists in IT and other fields. I would be happy to facilitate collaboration between ITMO and Özyeğin University on the creation of a joint research platform.”

With only 2,600 students on campus, the Brandenburg University of Applied Sciences is far from the largest university, which is conducive to a warm, friendly atmosphere among the students and staff. In addition, the university is located near to the picturesque town of Brandenburg an der Havel with a population of 71,000, and only 40 minutes away from Berlin, offering the students great opportunities for weekend trips to the German capital. Students can come here on academic exchange programs or to acquire a degree. While a majority of programs are taught in German, there are a number of English-language programs.

In addition to the representatives of international universities, some of ITMO University’s own students who had already taken part in academic exchange, as well as the staff of the International Office, took part in the event. They spoke with all interested students about the current mobility programs as well as the university’s Buddy System, whose participants assist ITMO’s international students by welcoming them to Russia, telling them about the country, and showing them around St. Petersburg. For ITMO students, the program is a way to not only improve their English language skills, but also to meet new friends.

The Buddy System works with participants of exchange programs, international Master’s students, and the students of ITMO University’s seasonal schools.

“Our Buddies approach their responsibilities creatively,” says Ksenia Strokina, a staff member of the International Office and a Buddy System official. "Back in 2017, some students from Finland and Brazil told us that their parents were wary of letting them come to Russia because they thought that living here is like playing GTA. Our buddies showed up at the airport to meet them dressed in Adidas tracksuits and wearing thick gold chains. The students who come here can always count on finding new adventures with their Buddy. There’s no room for boredom: at the very least, you should expect an extensive tour of the cultural landmarks.”

Find out more about ITMO University’s Buddy System on VK and Instagram.