On April 18, ITMO University’s Faculty of Secure Information Technologies hosted the awards ceremony for the winners of the сompetition in computer science, computer security, mathematics, and cryptography organized by the Russian Council for Competitions for School Students. The main prize of the competition is a chance to get admitted to ITMO University without entrance exams, and some of the winners are definitely going to use this opportunity. 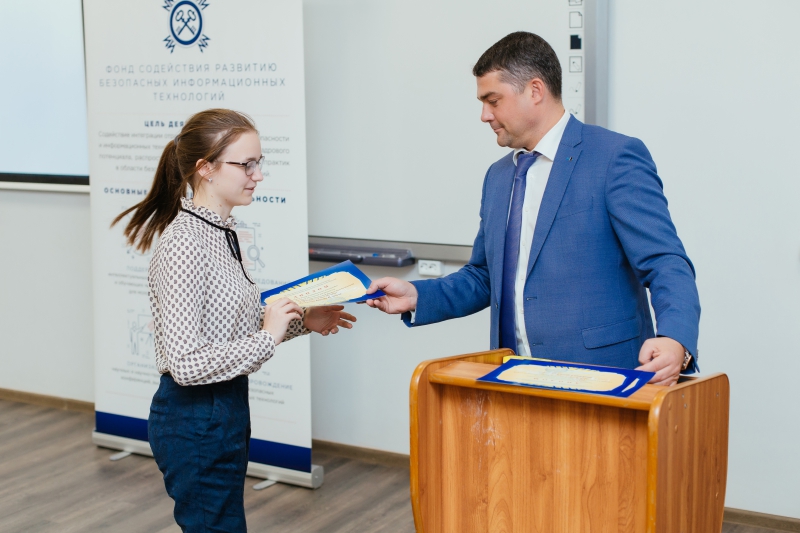 The awards ceremony for the winners of the сompetition in computer science, computer security, mathematics, and cryptography at ITMO University

The Russian Council for Competitions for School Students is an all-Russian social organization which hosts various kinds of competitions for talented school children. At the moment, the Council only organizes the competitions included in the list of the Ministry of Science and Higher Education of the Russian Federation, but in the future, it plans to combine them with competitions for university students, PhD students, and young scientists.

In the autumn of 2018, the Institute of Cryptography, Telecommunications and Computer Science hosted a series of competitions for school students in St. Petersburg. The competitions were held at ITMO University, Peter the Great St. Petersburg Polytechnic University, and the First Cadet Corps Military School. ITMO University hosted two competitions: in cryptography and mathematics, and in computer science and computer security. (The Institute of Cryptography, Telecommunications and Computer Science is a research institute within the Academy of the Federal Security Service of Russia, which trains specialists in such areas as data transfer, protection and processing. The Institute is the main higher education institution in Russia in the field of information security).

Apart from the representatives of the Institute of Cryptography, Telecommunications and Computer Science, the awards ceremony was attended by the staff of the Confident company, one of the first non-governmental organizations in Russia in the field of cybersecurity. According to Egor Kozhemiaka, the Head of the Information Security Center of the Confident company, the issue of data security is of great importance for both public authorities and private companies working in the field of cryptography.

Among the guests of the event were also representatives of several Russian educational institutions, namely Peter the Great St. Petersburg Polytechnic University and ITMO University. Danil Zakoldaev, the Dean of Faculty of Secure Information Technologies, shared with the winners of the competition about the Faculty and its mission.

“The era of computers has brought along a myriad of compromises in the constant search for the best combinations of inconsistent factors: integrity, availability, and confidentiality of information. The increase in one of them leads to a decrease in the other two,” explains Danil Zakoldaev. “Taking into account the pace of technological progress in data processing, storage, and transfer, one can expect major changes in the field of data security in the nearest future. That’s why, while working with the existing state-of-the-art technologies, the Faculty looks far ahead in the future. Our educational programs focus on new physical principles of data processing, including post-quantum cryptography. Our scientists do research into self-driving vehicles; together with Sberbank, we train specialists in the field of cybersecurity in the banking industry, while our Laboratory of Computer Forensics works in close collaboration with the Ministry of Internal Affairs of the Russian Federation. In addition to that, we host numerous workshops and competitions in sports hacking.”

According to Danil Zakoldaev, information security is an interdisciplinary field that lies at the intersection of several disciplines, such as chemistry, physics, psychology, legal studies, social science, medicine, and others.

The main perk of the competitions organized by the Russian Council for Competitions for School Students is that the victory will earn you 100 points in the relevant discipline in the Unified State Exam, or will give you a chance to get admitted to ITMO University without entrance exams. Many participants of the competition won in several categories. Among them is 14-year-old tenth grader Lev Voinov, who says that he really enjoyed the competition. In a year, he plans to apply for ITMO University’s Faculty of Secure Information Technologies or a program focusing on programming.