The modern world is marked by ongoing technological development which is extremely hard to get on top of. This is especially true for older people, whose lives usually don’t revolve around the online as much as young people’s do. To improve the situation, ITMO University’s Volunteer Center hosted #VSeti, a workshop on teaching seniors the intricacies of smartphones and social media. The classes were organized on April 20-30 for the volunteers of the nonprofit Silver Years. 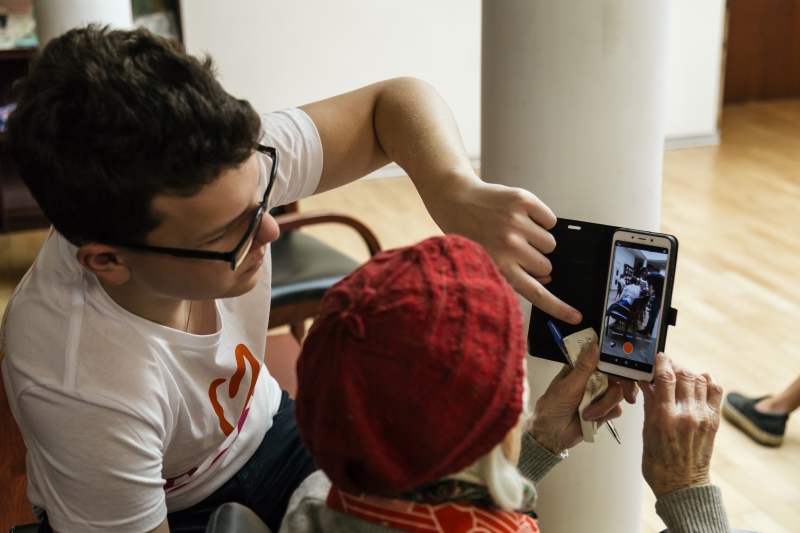 Silver Years is a nonprofit facilitating the social adaptation of pensioners. It encourages the culture of learning, activity and age positivity among seniors and promotes positive attitudes towards people of this age group as valuable participants of and contributors to society.

The organization’s record accounts for many successful projects, including those implemented with support from the Presidential Grants Foundation. In 2012, its Silver Volunteers initiative became a laureate of the national festival of social programs Sodeystvie in the nomination “Improving Quality of Life of Older People”. The Silver Volunteers program is aimed at the creation of volunteering movement of seniors from St. Petersburg, Krasnodar, Kazan and other Russian cities. As of today, it unites over 3,000 volunteers in five Russian cities. Together, they partake in social, sports, ecological and cultural events both around the country and internationally: Silver Volunteers even helped organize the 2012 Summer Olympics in London. They also contributed to the organization and conduct of the 2014 Olympic and Paralympic Games in Sochi.

It was the goal of educating the Silver Years volunteers that brought together the nonprofit and ITMO University’s volunteers. According to the organization’s director Yulia Maltseva, the significant gap dividing seniors and modern technologies makes it important that the former get all the opportunities to access to and learning to work with modern technologies. This will allow older people to keep in step with the times and feel at ease in the modern, and overwhelmingly digital, age. This is especially crucial for Silver Volunteers, who are active participants of local, national and international events.

Taking place for some two hours daily, the classes were held at the Dom cooperation space in several formats. The lectures were dedicated to smartphones, covering all topics from their functionality to use and how-tos of choosing the right model. At the app-centered practical classes, the participants learned to work with Instagram, WhatsApp, and other social media and web tools.

Silver Volunteers turned out to be pros in the realm of VK, so this social network was left out of the program. It was Instagram that raised the most interest. ITMO volunteer Galina Larionova shares that questions about the app started coming in even before the classes began.

“It turns out that for older people, this social network is an easy way of keeping in touch with events in their family members’ lives,” says Galina. “I thought that the classes would be difficult, but the reality was far from that: the whole atmosphere was very positive. Day-to-day, I often encounter criticism from seniors because of my red hair and active social position, but Silver Volunteers behaved in a completely different way, they were very polite, cooperative and enthusiastic. All of them were very motivated to learn and actively seeked out knowledge. Working with them was great, and I really enjoyed the experience.”

After the #VSeti course ended on April 30, the organizers decided to continue the course in the next academic year. According to Silver Years’ director Yulia Maltseva, every year the organization gets approached by 100 volunteers-to-be, and for all of them, mastering new tools is as important as it is empowering. What’s more, this helps them share their work on social media and thus encourage their peers to take on a more active social position and also join the volunteering movement.