ITMO University has recently hosted an opening ceremony for a series of events that will take place as part of a Japanese-Russian youth exchange program. Last year, fifteen ITMO students who actively participated in volunteering activities went to Tokyo; the Japanese Society for Rehabilitation of Persons with Disabilities acted as the host party. Volunteers from Russia got lots of information about Japanese programs for helping the disabled. This time, a group of Japanese students came to Russia to learn how such programs are implemented in our country. 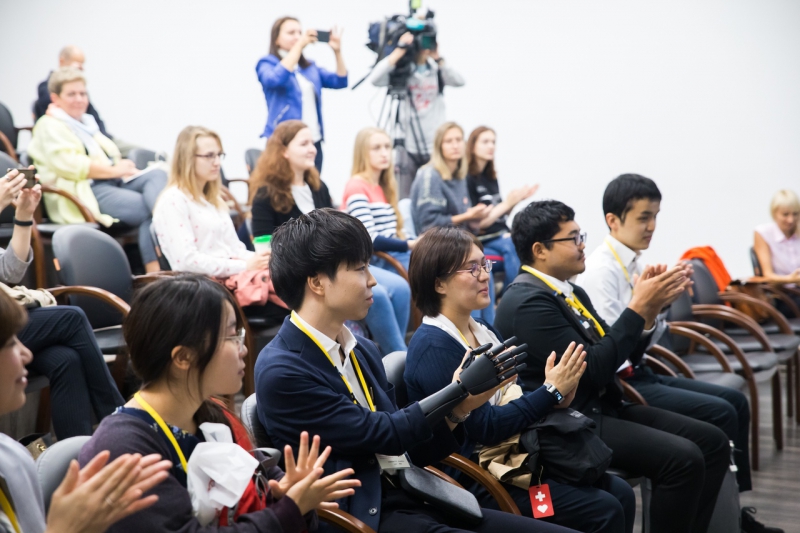 The Japanese delegation in St. Petersburg

The Japanese-Russian youth exchange program was developed back in 1999. At that time, it covered such fields as sports (judo, kendo, football), culture (theater, tea ceremonies, shogi, anime, cosplay) and education (the Japanese language). In 2018, volunteering was also added to this list by the initiative of the Committee for Social Policy of St. Petersburg, the consulate of Japan in St. Petersburg, ITMO University and the Japan Russia Youth Exchange Center in Tokyo. The program’s participants study the approaches that exist in Japan and Russia and then introduce them to their activities.

In August 2018, a group of 15 ITMO University students went to Tokyo to learn about Japan’s unique system for helping people with disabilities. On September 8-14, 2019, the participants of the Japanese group will conduct a series of meet-ups with their Russian colleagues engaged in volunteering. They will familiarize themselves with the mechanisms and approaches used for the development and support of social volunteering in St. Petersburg. The volunteers will be offered a comprehensive program that involves visits to St. Petersburg establishments and organizations that offer help to people with disabilities.

Program’s importance for Russia and Japan

Participating in the opening ceremony were Yasumasa Iijima, Consul General of Japan in St. Petersburg, Aleksandr Rjanenkov, head of the Committee for Social Policy of St. Petersburg, and Andrey Zlenko, head of the Department for the Development of Student Initiatives. Each of them greeted the guests from Japan and addresses all of the exchange’s participants.

“For me, it was a pleasure to see the members of the Japanese delegation come in. We really lack simple human interactions between Japan and Russia. I want to thank the consulate of Japan in St. Petersburg and ITMO University for their contribution to this exchange program. Our countries have many similarities and differences, and this program gives us an opportunity to hear each other out, learn from each other and use what we’ve learned to help our people,” noted Aleksandr Rjanenkov.

Yasumasa Iijima, Consul General of Japan in St. Petersburg, also marked the program’s significance and said that it is important to both volunteers from our countries and people who need their help.

“To my mind, St. Petersburg is a leading city in what has to do with helping people with disabilities. I am sure that exchanging experiences and opinions between our countries will contribute greatly to the development of the volunteering culture. We have a lot to learn from each other, which means that the coming week will be very busy and useful for volunteers from Japan and Russia,” commented the Consul.