Steps Away: Places to Explore Near ITMO University's Kronversky Campus

In the Russian language, the word okno – “window” – has another meaning familiar to any student or professor: “an empty period between classes”. Whether you’re a virtuoso of time management or someone who makes it up as they go along, you’ll be sure to encounter these in your daily life. In this series, we’ll consider a few options for how to put that extra time to good use. And we’ll start by exploring the area that’s key for every ITMO student or staff member: the main campus at Kronverksky Prospekt 49. 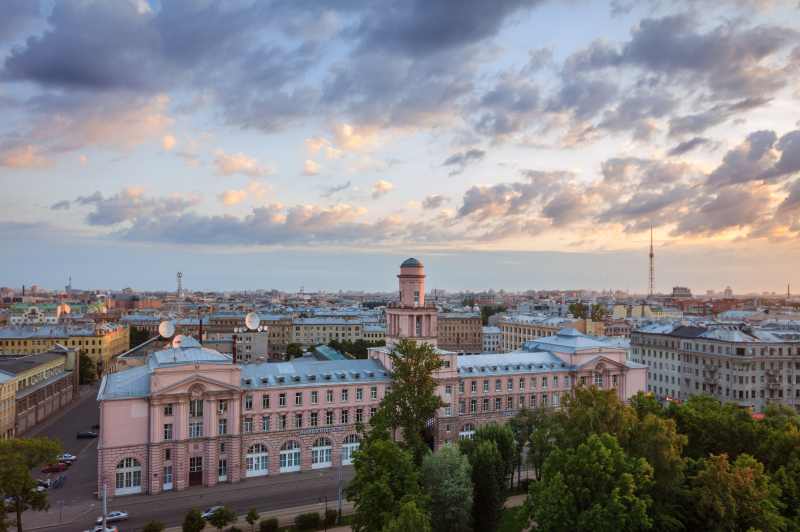 If you’re more of an outdoor person and would rather spend your time among nature, pop by to Alexandrovsky Park right across the street from Kronverksky 49. The park itself has no shortage of curious sights – such as a miniature copy of the city where you can play out your Godzilla fantasies, or an Imperial-era grotto that’s now home to a cozy coffee house.

Lovers of all things quirky and eccentric will surely be enamored with this place – a classic St. Petersburg courtyard that’s been turned into a work of art. Heaps upon heaps of junk, old toys, scrap, and even two Lada cars are mixed together in a brash potpourri of color. This is Nelson’s Courtyard, a place extravagant enough to have been featured by Atlas Obscura.

Who doesn’t love a good movie? Until fairly recently, finding a screening in any language but Russian was a challenge for those living in St. Petersburg. Thankfully, that is no longer the case as more and more viewers opt to see films in their original language. And there are few places more suited to that end than the Lenfilm cinema, situated on the premises of the famed movie studio of the same name. There’s always a few screenings scheduled, which you can check here. It’s also one of several venues where you can watch broadcasts of plays and opera performances from around the world as part of the TheatreHD project.

Located in the former apartment of revolutionary and Soviet politician Sergei Kirov, the Kirov Museum is a glimpse into the lifestyle of Soviet elites of the 1930s, as well as into the life in pre-war USSR. Numerous exhibitions explore not only Kirov’s life and career, but also the history of Kamennoostrovsky Avenue or even what it was like to be a child in 1920s Leningrad.

In 1917, this exquisite mansion in the very heart of the city spent three months as the headquarters of the Bolshevik party; Vladimir Lenin himself would address audiences from its balcony. Nowadays it is home to the Political History Museum, which traces the nation’s tumultuous history from the reign of Catherine the Great and till the present day. The extensive permanent collection will let you familiarize yourself with the key events of Russia’s history, while the slew of temporary exhibitions offers glimpses into a variety of other topics – such as women of the revolution, socialist art, or the 1993 coup d’etat.

Peter and Paul Fortress – 17 minutes away

This list, of course, would be incomplete without the place where the history of St. Petersburg began, on a patch of land called Hare Island. Today, almost all of the fortress falls under the purview of the State Museum of the History of St. Peterburg, and there’s plenty of museums and sights to check out during your visit: the Peter and Paul Cathedral, of course, in which all Russian tsars are buried; the Museum of Cosmonautics and Rocket Technology, located in a former gas propulsion lab; the Trubetskoy Bastion Prison, where many famous prisoners once languished; and much, much more.