In November, a team from ITMO University released their dating app, Firstep, on AppStore. Said by its authors to be “the most delicious dating app”, it allows users to invite each other to their favorite food spots in just one click. ITMO.NEWS spoke to the project’s founder, Yan Slavkin, about Firstep’s specifics, partnerships with restaurants and cafes, and planned launches in Europe and Asia. 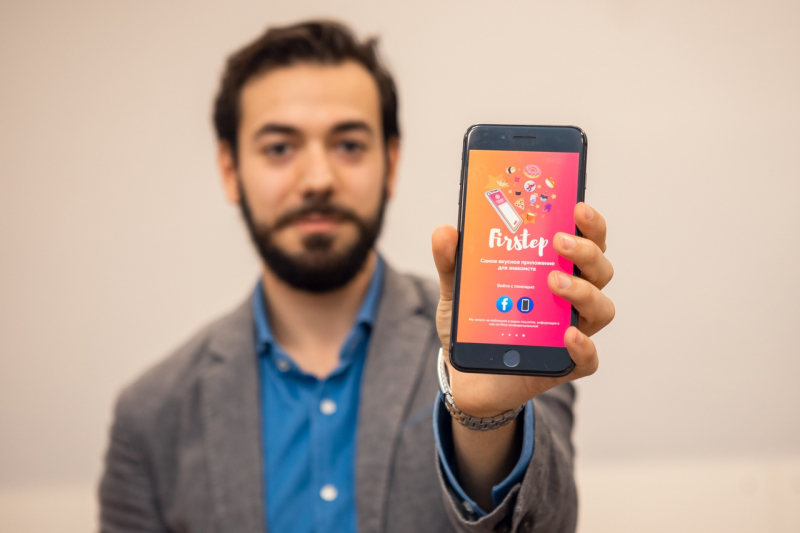 Firstep offers its users indicate three favorite food places in the city: restaurants, bars and coffee shops. This information is displayed as buttons in your profile, so if you like a person all you need to do is to click on the place to send them an invitation.

“This concept solves several problems in one go right at the start of communication. First, you no longer have to worry about how to start the conversation, because you already have a topic: your upcoming date. Second, it’s safe. You can go to your usual place, which you frequent and know what kind of visitors it has, how alert is the staff. This is especially important to women because they might not always feel completely safe during a regular Tinder date. And third, when you are relaxed, you can get to know each other better. Just imagine: it’s your favorite coffee shop, your favorite dessert is already on the table, you’re talking with a nice person, you flirt – there’s a real chance to fall in love,” shares Yan Slavkin.

What key features does Firstep have? The first one is time limits. In 12 hours, you can only look through 25 profiles, invite 25 users and accept 15 invitations yourself. In 24 hours, you have to accept or reject an invitation – otherwise, it’ll just disappear, and you’ll have no opportunity to start chatting with the person who’ve made it.

According to the project’s founder, these measures were taken to prevent profile viewing into an automatized gesture, which is what most often happens in the popular Tinder, Badoo and other apps with similar mechanics.

“We’ve analyzed the workings of over 400 apps with the mechanics of ‘swipe right/swipe left’ and found out that it allows a man to view a profile in 1-2 seconds, and a woman in 5-6 seconds. Thus, a man picks up a large number of irrelevant pairings, in which real communication won’t ever start. For example, in Tinder over 70% of the chats never actually lead to the people meeting,” explained Yan Slavkin.

Thanks to a special control mechanism, the app also reduces spam and unwanted interactions to the minimum. A user can report a contact, and suspicious profiles won’t even make it to the public access: the system, which checks each profile for its compliance with the rules of the service, will never let it to. This means no iffy pictures that hide a person’s face or suggestive profile descriptions.

The app’s idea originated when its authors were undertaking a joint business internship of Massachusetts Institute of Technology and ITMO University in 2017. Back then, the team faced the task of developing a real-world product on the basis of which an enterprise could be built. They firmly decided to work on the app and ended up creating a unique dating app format. This development put them in first place and a money prize in the nomination “Best Business Idea”.

It took the team two years to transform the idea into a high-quality app that meets all of the market’s demands. According to the founder, dating apps have a big future in front of them as today’s youth spends a lot of time with their gadgets, and for them searching for a partner online isn’t a crazy scheme but a completely normal strategy. That’s why the number of users will only grow, creating a necessity for developing a convenient and safe product that would have a competitive advantage and be in high demand on the market in the following years.

“The most difficult aspect of starting was to assemble a team of people who’d share the values, philosophy and belief in the project. We received our first investment opportunity during the internship, but back then we refused because the team wasn’t working as smoothly. And for a young startup, the most important thing is to adjust all of the internal processes, as it’s only after this that you can enter partnerships, communicate with investors and do business,” said Yan Slavkin.

As of now, Firstep gives its users access to all of its functionality for free. In the future, the team plans to add some fee-paying options, but this won’t concern the free services available on the app today. Most likely, these will be bonus packages for removing time limitations on viewed profile or some additional functions that for now are in the development stage.

An important vector for the project’s development is building partnerships, bars and coffee shops. At the moment, the Firstep team is working to integrate the app with a loyalty system. If a couple has already went on their first date and is choosing a meeting place for another one, it will be beneficial for them to do this via the app as the food place will offer them a discount. It’s also planned to introduce advertising into the app, but the project’s authors intend on making it unobtrusive and more likely than not in the format of recommendations that would appeal to the users.

These options will allow restaurants and coffee shops to increase their traffic, and consequently their profits. That’s why now the team is developing the functionality that would track the number of couples coming via the app for daily, weekly or monthly time periods – based on this information, a commission for the traffic will be introduced, amounting to 10–15% off each bill.

“There are over 60,000 different-format food spots in Russia, and over 10 million in the world at large, and all of them are our potential partners. As of now we already have our release dates in Kiev and Paris, there we’ve also found a company that is ready to work with us. We also have investment offers from Korea, the UK, we want to enter the European, US, and especially Asian markets. But this will come a little bit later. Right now we are creating a dream rather than doing business. We don’t want to lose our freedom to choose any mechanics and strategy we want. As soon as we realize that we’re ready to have investments pumped into our project, we’ll do that, all the more so that we’ve enough offers,” commented Yan Slavkin.