Not Conflict, But Synergy: On Salvador Dali’s Relationship with Science

Sergei Stafeev, a professor at ITMO University and a leading expert on optics and art & science, will deliver a lecture titled “Salvador Dali and Science” on February 6 as part of a major exhibition of the Spanish artist’s works. He will examine the examples of harmonious synthesis of science and art, as well as the mutual influence between these fields in the 20th century. We spoke with Professor Stafeev to find out more about the exhibition, Dali’s scientific endeavors, and notable works in the field of art & science. 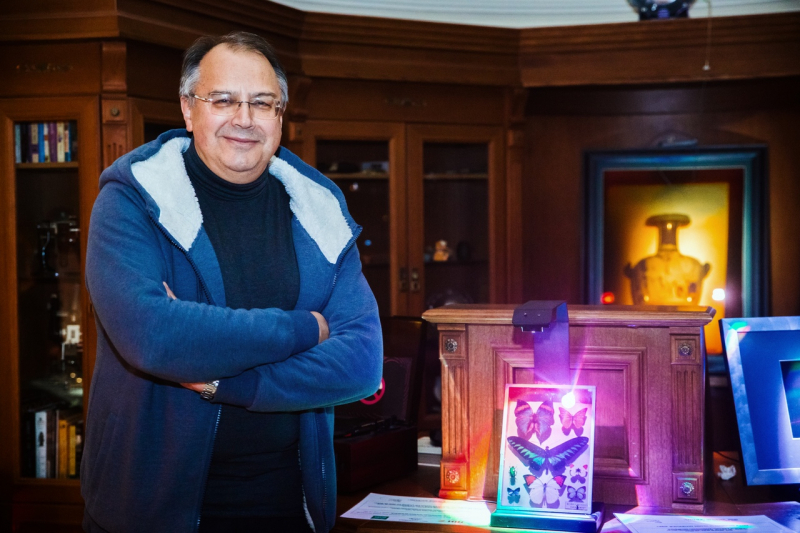 On January 28, 2020, the exhibition “Salvador Dali. Magic Art” was launched at Moscow’s Manege Central Exhibition Hall by the Link of Times Foundation and the Fabergé Museum in partnership with the Gala-Salvador Dalí Foundation (Figueres) and the Museo Nacional Centro de Arte Reina Sofía (Madrid).

The exhibition includes 188 works by the Spanish artist, including paintings, sketches, engravings, and holograms. Among the pieces on display are such well-known works as Portrait of my Sister (1925), The Invisible Man (1929-32), Enigmatic Elements in a Landscape (1934), Soft Self-Portrait with Grilled Bacon (1941), Dematerialization Near the Nose of Nero (1947), and The Maximum Speed of Raphael's Madonna (1954).

Professor Stafeev, can you tell us how you ended up working on this project?

The Fabergé Museum is one of the exhibition’s key partners, and it has long been a friend of ITMO University. I became involved back in 2015, when we worked with our Greek colleagues on an exhibition of holographic copies of the Imperial Fabergé eggs. Later, in 2017, the museum had organized an exhibition of Dali’s works and got in touch with us to find out about Dali’s relationship with science. That was when I had first given a lecture on this subject. This year’s lecture will include the same material, but expanded with the things I’ve learned over the past couple of years.

When did you first become interested in Dali’s scientific endeavors?

For more than 20 years I have been studying the secrets of antique paintings and the artists’ use of optics and camera obscuras. As for Salvador Dali, I first focused on him in 2017. I’m glad that it happened, because Dali is a unique example of an artist who was genuinely inspired by science; he can only be compared to Leonardo da Vinci who, having only a basic education, created engineering structures purely by intuition. Dali, in turn, perceived the principles of quantum mechanics and the fantastic genetic memory of living beings.

So this is less about artists-scientists and more about different specialists who assist each other?

Of course. Dali wasn’t familiar enough with science to create some of his more technological works on his own. He discovered ideas and trends, drew inspiration from them, and then consulted with specialists. He worked with the Romanian mathematician Matila Ghyka in order to achieve a perfect composition in his painting Leda Atomica, as well as with the DNA pioneers James Watson and Francis Crick. And Dali is far from the only example. Johannes Vermeer, for instance, lived on the same street as Antonie van Leeuwenhoek, the “father of microbiology”, who educated him on the fundamentals of optics. But there are contemporary art & science duos, as well. The artist David Hockney, for one, often consults with our good friend Charles Falco, a professor of optics and physics at the University of Arizona.

How does science influence art?

There is a triangle of knowledge transfer, and its peaks are science, art, and technology. And no matter how you rotate it, each pairing has its nuances that influences the development of the neighboring fields. On the one hand, revolutionary scientific hypotheses often serve as inspiration for artists; but the fantastic ideas of writers or painters are often made reality by scientists. For example, Yuri Denisyuk, who created the first artistic hologram here at ITMO, was inspired by the description of a three-dimensional alien from a short story by Ivan Yefremov. It’s the same with technologies: a great number of modern exhibitions are made with technology or inspired by its development, but there are also examples of engineers borrowing ideas from art. In the end, it’s a constant process of exchange and synergy.

What endgoal do you pursue by talking about art & science at this event?

I’d like to show people that the relationship between science and art is not one of conflict, but of synergy. Many perceive it as some stand-off between “physicists and lyricists”, yet it is anything but. And my goal is to use the examples of Dali and his precursors and followers to prove that only the harmonious collaboration of the left and right lobes, emotional and rational thinking, knowledge and intuition, and so on can produce fantastic results in literature, art, and cinema as easily as in science.