According to recent research by ITMO University scientists, chia seeds, a popular healthy topping, can improve the characteristics of yogurt. Authors of this research discussed the results they achieved, obstacles they faced, and further plans for their project. 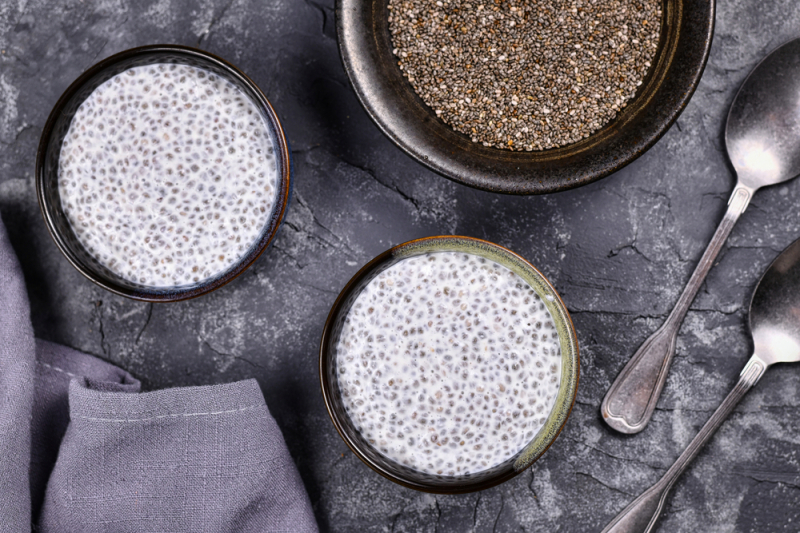 Several years ago, staff members and students of ITMO University’s Faculty of Food Biotechnologies and Engineering, together with their colleagues from the Omsk State Agrarian University named after P.A. Stolypin, began to study various parts of chia, or Salvia hispanica L., and the possibility of its cultivation in the Russian climate.

At the same time, they researched various features of black chia seeds – the product of Salvia hispanica L. – produced in Uruguay and mixed with dairy products. The oat-chia seeds composites were mixed with yogurt in different proportions. However, comparison of the initial yogurt sample and oat-chia sample showed that oat bran has no significant impact on the product’s structure, therefore it isn’t crucial to rheological properties, but influences the water-holding capacity.

Chia seeds showed great results when it comes to enrichment of yogurt with fatty acids Omega 3 and Omega 6. The scientists conducted a comparative organoleptic analysis of yogurt samples mixed with imported chia seeds and with flax seeds produced in Russia. Their properties turned out to be completely different.

Even though flax seeds can be considered a substitute for chia seeds, they aren’t the same. Both chia and flax seeds include carbohydrates that produce gel once you mix seeds with water. However, the ability of flax seeds to produce gel and hold the water is inferior to that of chia seeds. Plus, the strong taste and flavor of flax have a negative effect on organoleptic features of dairy products containing flax seeds.

Moreover, flax seeds aren’t that easy to store: they quickly get oxidized. It means that it’s harder to use them as a food additive. ITMO University scientists proved that it makes more sense to use chia seeds in dairy products’ production.

These conclusions are described in a recently published scientific paper called Rheological and Physical Chemical Properties of Yogurt with Oat-Chia Seeds Composites by Denis Baranenko and Lyudmila Nadtochii, associate professors at ITMO’s Faculty of Food Biotechnologies and Engineering, Vera Ivanova, assistant at the faculty, Artyom Lepeshkin and Anna Safronova, PhD students, as well as Weihong Lu, professor from the Harbin Institute of Technology.

The research team used all the properties of chia seeds that can benefit dairy products. It allowed them to avoid other stabilizers and food additives.

“Our idea was to create a product using only plant-based stabilizers and avoid E numbers. Even though we understand that even salt has its own E numbers and they don’t necessarily make the product unhealthy, it’s hard to explain this to an average customer,” says Artyom Lepeshkin, PhD student and one of the research authors.

Gelling properties of chia seeds allowed scientists to create a yogurt without any other thickeners and stabilizers. On one hand, it’s great, as it means that it’s possible to make yogurts, puddings, and other dairy products using plant-based additives, but on the other hand, today it’s too expensive.

According to Artyom Lepeshkin, stabilizers, thickeners, and other additives in average doses aren’t harmful to consumers, so substituting them isn’t justified right now. Especially considering that Salvia Hispanica L. is produced in South America, Uruguay, Paraguay, India, China, Australia, France, and Spain. This product is imported to Russia once every few months. However, Salvia hispanica remains interesting for researchers, as it’s possible that its new advantages will be discovered, or existing ones will be adapted for a new product.

Artyom Lepeshkin says that their article proves that chia seeds add to the biological value of yogurt’s lipid component when it comes to essential fatty acids. It makes the product more balanced.

The researchers admit that their chia-seed yogurt is a niche product not suitable for mass production for two reasons. Firstly, chia seeds aren’t produced in Russia, so it’s hard to import and process them. During the mechanical grinding, seeds get heated, and show their gelling properties, so a simple mill wouldn’t be enough –  an expensive cooling device is also necessary, otherwise the seeds will lose many valuable characteristics.

Secondly, according to the research, yogurts with cereal toppings aren’t popular in Russia. That’s why the authors of the paper believe that they should go beyond studying the structural and mechanical properties of chia seeds. They also plan to look into the possibility of cultivating chia seeds in Russia in order to overcome some of the obstacles.

“We have already received the first positive results considering the cultivation of chia seeds from different countries. We created our own introduced seeds in the Russian climate. This work was conducted under the supervision of Nina Kazydub, a professor from the Omsk State Agrarian University named after P.A. Stolypin. I think many more theses written at ITMO University will cover this topic, too. By the way, this year, Daria Kuznetsova, a PhD student, will defend her thesis titled Obtaining and Studying the Properties of Plant-based Biologically Active Components Based on Chia (Salvia hispanica L.) at the University of Lorraine. She researches early-maturing breeds of chia seeds created as a result of cultivation and adaptation of Salvia hispanica L. in France,” says Lyudmila Nadtochii, research advisor and associate professor at ITMO’s Faculty of Food Biotechnologies and Engineering.

If the seed introduction experiment will go well and researchers from the Omsk State Agrarian University named after P.A. Stolypin will be able to grow a local breed of Salvia hispanica L. suitable for Russian climate, the situation might change.

The scientists believe that further success of their project might make it possible to study the features of chia seeds more profoundly, compare the new Russian breed of Salvia Hispanica with similar imported seeds, and see if it’s possible to use it in mass production.