Machine vision algorithms, automation systems for the new industrial revolution, programs for robot cooperation - students at ITMO's student construction bureau work on serious tasks aimed at practical applications. Anyone studying at ITMO can come join the existing developer teams or propose their own projects. Here, one can not only gain additional knowledge in the field of robotic systems, but also get training for contests in robotics or get help in finalizing an idea for a potential startup. 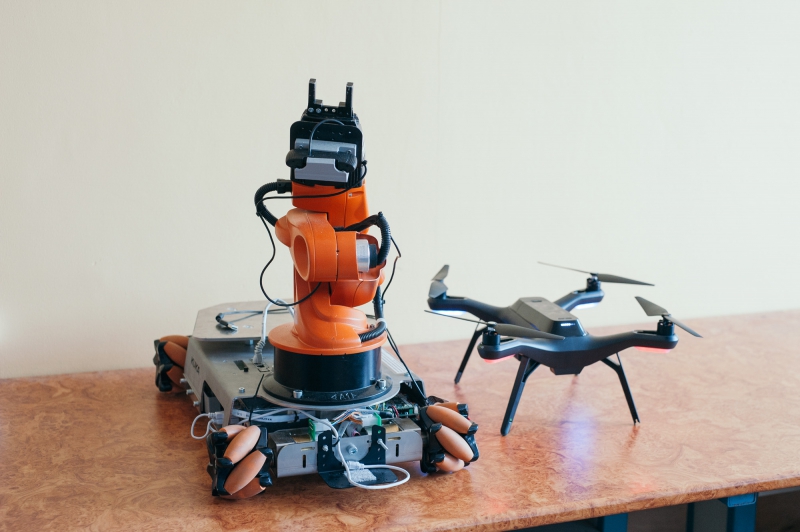 How does the construction bureau work?

The students themselves call it not a construction bureau or a laboratory, but the Robotics Engineering Department, or simply RED. In fact, RED focuses on not just robot construction, but more on developing software products that can help introduce robots to our lives. In other words, here students create "brains" for robots.

"At our university, we focus on three fields of robotics. The first is mechatronics, which has to do with a machine's structural design, load calculation, choosing the engines and parts, and the like. The second is electronics, i.e. connecting the robot's parts and systems. And the third has to do with high-level programming: things like machine vision, positioning, automation systems and robot cooperation. This is what we do at RED; in future, we also plan to work with neural networks, genetic algorithms and Big Data for robots," shares Alexander Kapitonov, research assistant at ITMO's Department of Computer Science and Control Systems and RED's head.

For their projects, the students mostly use the ROS (Robot Operating System) platform, which is, in a sense, a set of packages and infrastructure for robots which allows combining different software components. ROS's advantage is that it is used for both amateur and educational projects as well as developing industrial robots. What's more, thanks to its many software packages, there's no need to write drivers for robots from scratch. Many of the students write their graduation theses here, some participate in international robotics contests (like RoboCup and World Robot Olympiad),  others do research and publish it in scientific journals. Also, RED conducts educational projects - for instance, in summer 2015 they held a series of lectures and workshops in collaboration with Saint Petersburg State University's Mathematics and Mechanics Faculty, and recently, they've also conducted the "Controlling Mobile Robots" educational course.

Why is "making brains for robots" the profession of the future?

At RED, students focus on projects that can be introduced in real industry. According to the report by the International Federation of Robotics, by 2019 more than 2.6 million industrial robots will be used in production. In 2015, there were only about 1.5 million. More and more robots are used in cars manufacturing, metalworks industry, electronics and machine engineering. At the same time, ROS industrial states that robots do not progress quickly enough so as to complete new tasks. Partially, that is due to the lack of inventions in the field RED works in - and that means that the market is open for innovative solutions.

"We focus on inventions for Industry 4.0 that will become the basis for the upcoming industrial revolution - the era of Big Data, the Internet of Things, multi-robot cooperation and robots working alongside people," notes Ivan Berman, student at the Department of Computer Science and Control Systems. What is the fourth industrial revolution? Well, what is a revolution? It is when the established order changes dramatically. According to the experts' forecasts, Industry 4.0 will change production systems: their objects will intercommunicate, and all processes will be synchronized with each other.   The latter is something similar to the Blockchain technology, when each participant of a process knows what others are doing. All of that will lead to reduction in possible mistakes and improvement of service. For instance, the systems of your Smart House will notify other systems at plants that some of their parts are broken and need replacement. Surely, for such systems to work there will also be a need for advanced robots able to work both autonomously and in cooperation with humans.  According to some forecasts humans will even have the opportunity to control production remotely.

For the RoboCup contest that will take place in Japan this July, RED's team is developing an autonomous robotic manipulator. The machine's main feature is that it can operate in any surroundings provided it has the map of the territory. The robot's main task is to move across an area with obstacles and move different objects. It uses the SLAM (Simultaneous Localization And Mapping) algorithm system to define obstacles, and recognizes the objects it has to move by means of machine vision. What is more, the robot can put objects in different containers according to their shape and size.

"At RoboCup, there's the Industrial League for robots focusing on logistics and warehousing systems. The developer's task is to prepare their robot for moving through difficult terrain. Also, the robot won't know where the obstacles will be, and in which order it will find the objects it has to pick," shares Alexey Ovcharov, student at the Department of Computer Science and Control Systems and one of the project's authors. A project by RED: Controlling a Drone Fleet for Business Purposes

To control drones, RED's students propose using the Blockchain technology which is rarely used in this field. Yet, this is exactly the case where every participant of the process has to know what others are doing. Major logistics companies – Amazon, for instance – already state that they are aiming to use drones for deliveries. Introduction of drones in different business is impeded by not just legal issues, but the absence of technologies that would allow companies to control drone fleets. Researchers at ITMO University are already working on such a technology. According to the project, drones will distribute tasks and register their routes with dispatch by themselves; if a particular drone decides to enter a restricted area or its trajectory will intersect another drone's route, the program will automatically change its course. None of that would need a human operator's participation.

Yet the idea can be developed even further. One may not just coordinate the flight, but also give drones information from warehouses so as to further ease the logistics - similar projects are already conducted by ITMO's students.

One can come join RED at any moment. Students can always join a currently running project or propose a new one; if the idea is supported by the majority, RED will finance it from its budget.

Apart from ITMO University students, school students can also participate in the bureau's work. You can read more about projects conducted at the Robotics Center of the School of Computer Technologies and Controls here.