In April 2019, several second-year students of ITMO University’s Faculty of Control Systems and Robotics went to Innopolis to participate in the International Spring School on Self-Driving Vehicles. Their educational feats continued at Skolkovo, where they partook in the onsite round of the NTI Competition in the track “Aerospace systems”, taking third place as a result. Read on to learn about the students’ projects. 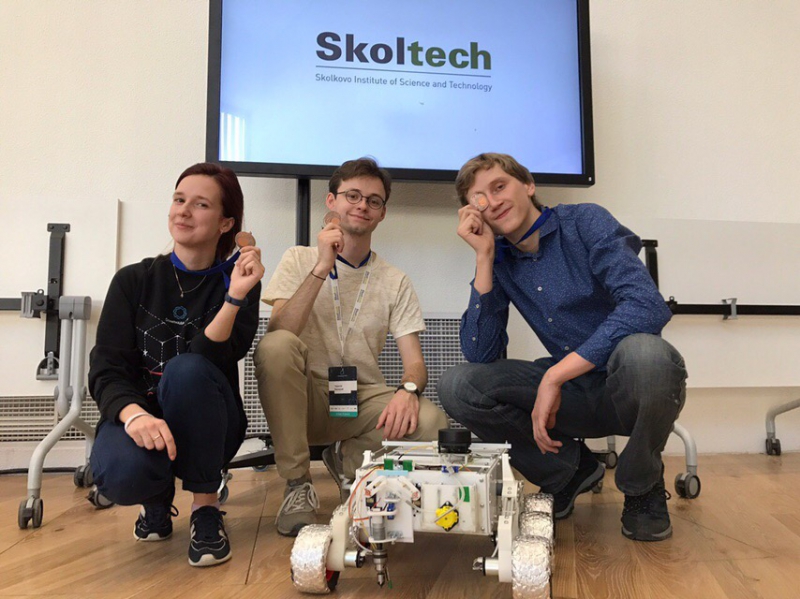 In March 2019, a number of ITMO University students went to Innopolis University to participate in the Competition of the National Technology Initiative in the track “Intelligent Robotic Systems”, which they ended up winning. The victory gave them an opportunity to participate in the International Spring School on Self-Driving Vehicles, which took place at Innopolis on April 6-13. The event brought together 25 students from Russia, Germany, and Azerbaijan, who were given a range of tasks on self-driving vehicles, such as parking an unmanned car, locating irregularities on the road, correcting the vehicle’s trajectory, driving in poor weather conditions, and so on. ITMO University’s team was made up of three second-year students of the Faculty of Control Systems and Robotics Artem Egorov, Valery Chernov and Evgenia Sevasteeva.

“They have their own self-driving cars at Innopolis, and that’s why we decided to give it a go and participate in this spring school in the first place. What makes this school truly special is that its participants don’t just listen to lectures, but communicate with each other a lot and work on real-life projects. Such an approach allows you to learn from your peers,” shares Valery Chernov.

Among the school’s organizers and mentors are the staff of the Department of Self-Driving Cars of Innopolis University’s Robotics Development Center. It’s they who set all the tasks and assessed the participants’ progress. Also attending the event were the representatives of the industry: the RZD company, whose staff talked about the design of self-driving trains, and the Finnish company Rocla AGV, who shared their experiences of building robots for working at warehouses.

“The Innopolis University is the only IT university in Russia with a closed ecosystem. It might feel unusual at first, but you get used to it pretty fast. Thanks to this system, you can wake up, put on your slippers and a dressing gown, make your way to the nearest classroom, unlock the door with your pass and, if the classroom is vacant, work there. Even if the classroom is very spacious, it may still happen that you’ll work there completely alone. The organizers of the summer school didn’t book any classrooms particularly for the event, and we could work in any room we liked,” continues Valery Chernov.

Right after the spring school came to an end, ITMO University students Artem Egorov, Valery Chernov and Evgenia Sevasteeva went to the Skolkovo Technopark to participate in the onsite round of the Competition of the National Technology Initiative in the track “Aerospace Systems”, which focuses on space exploration and remote planets.

The participants of the onsite round were given three days to solve the competition tasks. A total of seven teams out of 53 made it to the final round. Among them were students from Lomonosov Moscow State University, Moscow Institute of Physics and Technology, ITMO University, Far Eastern Federal University, the National University of Science and Technology “MISiS”, and other Russian universities.

The task the participants of the final round were offered to solve was to model the landing of a research rover: after the landing is completed and the spaceship lands on an unknown planet, the rover has to undock from the lander module and land on the surface of the “planet”. Using video data, the robot should identify its approximate location, find and analyze liquid and send the obtained data to the Mission Control Center.

All participants were given identical sets of equipment in order to perform the task, which included chassis, wheels, sensors, cameras, servo engines, and other elements. The students had to use these parts to build a rover. Each team consisted of a design engineer, electronics engineer, programmer, and rover operator.

The participants presented the results of their work at a special testing area equipped with a rover landing module. The rover’s task was to find a spot for drilling and collecting water, analyze it (in order to understand if it’s salty or fresh), pour it to a special container and find another drilling spot. After that, the rover had to turn back and return to the landing module. All these manipulations had to be performed in ten minutes.

“We were the only team whose rover worked autonomously. While other teams controlled their rovers using gamepads, we just set some transitional points, and the rover reached them on its own. This is how it works: we are sitting behind a wall and don’t see the rover. All we see is information from its video camera. We can map a dot on the map, and the rover has to maneuver around it,” share ITMO University students.

The first place in the onsite round went to the students of Lomonosov Moscow State University and Moscow Institute of Physics and Technology, students from Lobachevsky State University of Nizhny Novgorod and FabLab Yamal took second prize, and ITMO University team took third prize. The winners received fitness bands and an opportunity to do an internship as part of the projects conducted by the organizers of the “Aerospace Systems” track of the NTI competition.