A team of young engineers, CodeX, driven by the idea of promoting their own open-source products has recently launched a new season of CodeX meetups. In this article, Alexander Menshchikov, the company’s lead developer, speaks about his team, as well as their goals and first meetup in this season. 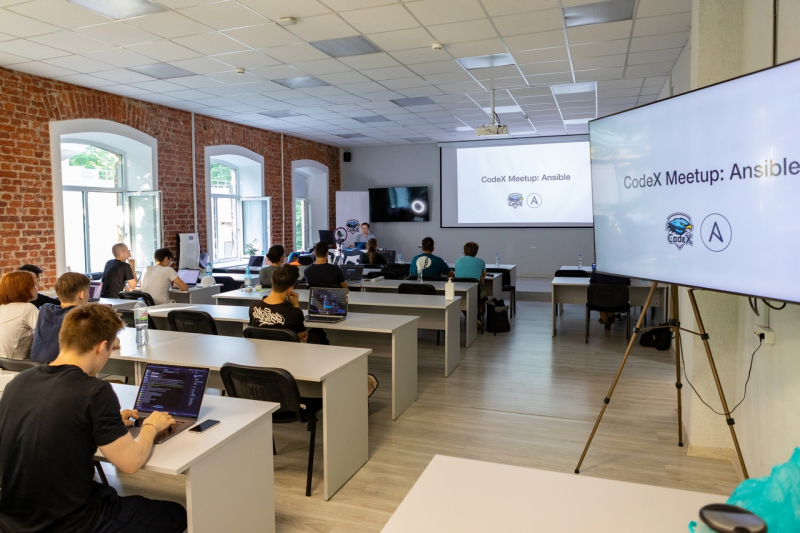 The story of CodeX began seven years ago. Initially started as a student web dev club, the company now brings together specialists from all over the world. Among its achievements are numerous projects, including large-scale and popular ones, for instance, the Editor.js visual editor widely used by many well-known media such as vc.ru or TJournal.

Apart from project activity, the team members also actively write articles and conduct workshops. CodeX Meetup is a series of small hands-on exercises that help students master a certain technology or approach. The new season of meetups started on July 15. Its first topic was Ansible, an open-source engine that automates the configuration of servers and infrastructure in a cloud environment.

“Each meetup is a new handy skill under your belt. This time, we talked about Ansible, a huge aspect of DevOps. Our work is closely related to service design and deployment. We have a variety of projects, a large and constantly growing server system, and a complex infrastructure. With the help of Ansible, we can significantly automate configuration and maintenance, as well as documentation. And we’re happy to share our experience with others,” says Alexander Menshchikov, a lead developer at CodeX. “We’ve been in web dev for a while: at first, we developed simple web services and now high-load systems with hundreds of servers. That’s how we got a sense of DevOps. We tried everything from manual settings to bash scripts, and finally, automation.”

“When we turned to automation, we had to figure out how to manage infrastructure and configuration. Sometimes, it’s hard to keep settings current. For instance, someone decided to make changes and forgot to document them or they did something wrong and thus created some unexpected side effects. The similar issue with software, its updates and testing new features. And here Ansible comes to our rescue,” continues Alexander Menshchikov.

Ansible stores all the necessary data in the form of code (Infrastructure as Code), that is, text files that can be read and understood by humans. Its built-in modules make it possible to describe the entire infrastructure in a simple and concise language. The technology can also be used for app deployment, system update, and configuration. All processes are performed in a seamless, almost invisible to users way.

Ansible, however, has a few rather specific features. Many people don’t know how to use them correctly and because of that, they find them useless. The first one is idempotency: all scripts are meant to have the same outcomes, which gives no room for side effects. The second has to do with the program’s push mode. There is no need to manually compile commands for each server, users can immediately send them altogether from the management system.

There are also several other platforms with similar work principles. Ansible is yet the simplest one, perfect for beginners. During the recent workshop, participants learned to deploy the infrastructure of a web service, created their first-ever playbooks, efficiently organized their codes, and uploaded them to Ansible Galaxy. Although the participants had no background in DevOps, they managed to succeed at these tasks.

As noted by Alexander, CodeX is a place where people share their knowledge and skills. Thanks to this culture, specialists can expand their horizons: developers master design and DevOps, managers know how to code, and so on. The meetups became one of its exchange platforms, too. Although they were previously held only within the team, now they are available to everyone.

You can keep track of the event’s calendar in the CodeX VK group and sign up for the meetups via a special bot in Telegram.

The meetup took place under the aegis of CodeX Lab – a new joint education project between CodeX and ITMO’s Faculty of Secure Information Technologies. Here, students can do their internships and start working on full-fledged products, and the most ambitious ones will have the chance to join the CodeX team. The call for CodeX Lab will open at the beginning of the academic year.