Currently, visualization technologies help researchers predict flows, analyze crowd behavior and make medical decisions. ITMO University researchers developed the 3D Human Anatomy Atlas and the interactive «map» of the blood-vascular system. he invention is to be used at universities and in hospitals. 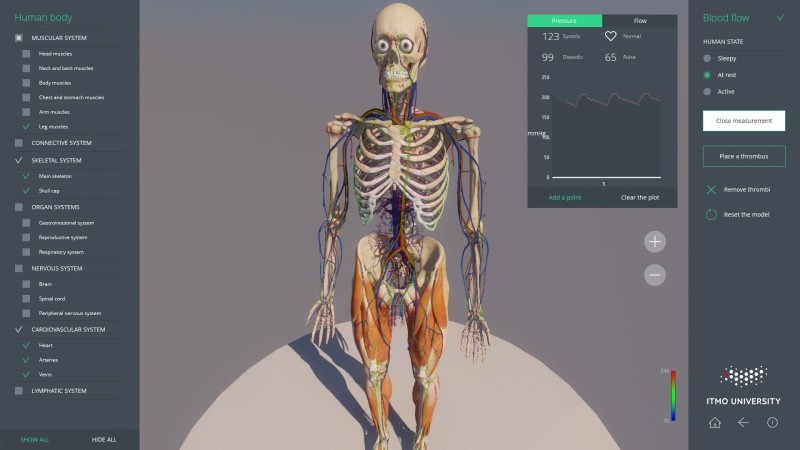 The 3D Human Anatomy Atlas is a visualization of human internals, muscles and biological systems' work, such as the digestive tract, nervous system and others.

There are two versions of the Atlas. At first, ITMO University researchers developed an atlas for educational purposes. It included the following option: one could «construct» a body of a man with the standard physiological parameters using visualized images of internals. The project was developed in with the ABCC company by request of Immanuel Kant Baltic Federal University. Then the researchers made one more atlas for medical specialists. They added the model of blood-vascular system, which shows the blood flow and all its' characteristics in different parts of body the in real-time mode. It is not a static model, on the contrary, one can see how all systems change. Currently, the scientists of the International Research Center «Clinical Decision Support Systems» work on this project.

Visualizing individual biological systems of the human body is a very complicated process, which requires a large amount of preliminary analyses of health peculiarities of a person. This process includes both computer tomography and MRI that are necessary for measuring internals, detecting their location and peculiarities.

According to specialists, the interactive atlas shows how coronary arteries work. Using this data one can predict how many surgeries are needed for a patient suffering from a heart disease and where exactly they have to be done. «Visualization is a useful tool for education, science communication, entertainment and other purposes. This way, developers and researchers can present their projects to the general public, as everybody can look at the results by themselves as opposed to read scientific articles or manuals,» said Andrey Karsakov, junior researcher at the eScience Research Institute.

Data visualization technologies can be applied to almost all areas. Thus they are used in the St. Petersburg Flood Prevention System — researchers analyze the water level and pressure rate in the different points the Gulf of Finland and the Flood Prevention Facility Complex.

Moreover, sometimes it is difficult for researchers to classify the results of their scientific research projects without visualization. A wide range of various data is almost impossible to analyze because it consists of many numbers and symbols.

The 3D Human Anatomy Atlas was presented at a medical conference on virtual technologies in Netherlands.