Telemedicine in Russia: How IT Technologies Help Improve the Healthcare System

According to Watson Health, a subdivision of IBM, the amount of data generated by each patient throughout his life exceeds 1000 terabytes. Yet, how can we store this data, effectively manage it as part of a common medical system, and what's most important, is the Russian healthcare system ready for a countrywide introduction of information technologies? The Federal Almazov North-West Medical Research Centre has a medical information system that makes use of an experimental decision support system developed by ITMO University, and the country’s Federal Telemedicine Center has the opportunities to provide remote consultations to more than 5,000 patients a year, as well as training to medical specialists all over Russia. During a recent tour of the Almazov North-West Medical Research Centre, ITMO's Master's students learned about the modern medical information systems (MIS), the prospects of their applications, and the software that medical specialists will need in the future. ITMO.NEWS shares about the novelties of one of Russia's most advanced medical research centers. 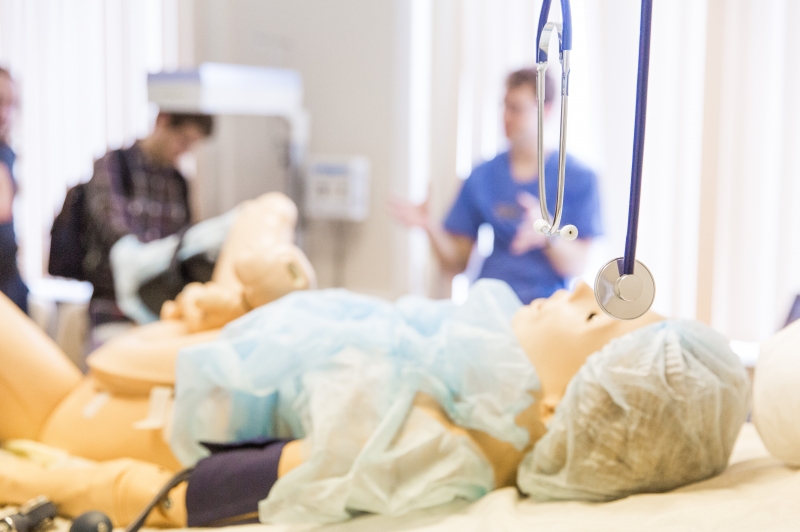 IT technologies in medicine

According to Gartner's analysts, in less than ten years Virtual Personal Health Assistants (VPHA) will be ready to replace humans in the field of primary medical assistance. By 2025, more than half of the population will make use of VPHA's, which will be thought to work faster and more precise than human specialists. Even now, surgeons rely on Da Vinci robots, and computer simulators are replacing the once commonly used anatomical tables.

Yet, in order to create a common comprehensive digital medicine system, several issues need to be solved. Gartner's analysts define five major tasks, including those related to patient safety, the quality of medical assistance, its accessibility, continuity, and patient involvement. To face these global challenges, specialists from all over the world create electronic systems for keeping medical records, appointment booking and prescription of medications, develop telemedicine, e-business intelligence, and decision support systems.  EU specialists have already calculated that introduction of even some of these technologies will help avoid prescribing hundreds of thousands of wrong medication orders, excessive laboratory assessments, which will in turn help the healthcare system save several millions of euros.

Russia also develops its own medical information systems: as of now, there are about 700 companies working in the field of medical software development. Yet, most of their systems are still far from becoming one-stop solutions. Ideally, MIS are to work as mentors or colleagues who offer the opportunity to keep electronic records with the support of multimedia data and make use of scientific-based medicine support elements, as well as possess advanced analytical capabilities - decision support, for instance. In future, they might even give advice on possible treatment methods. According to Dmitry Kupareev, Head of Almazov North-West Medical Research Centre's IT Department, the fourth-generation systems have only started to appear on the market, yet at the Center, they are already working on comprehensive automation of different fields and activities as part of a common informational environment. Two years ago, the Almazov Research center in collaboration with ITMO's eScience Research Institute launched the project on organizing the system for controlling the fleet of St. Petersburg's ambulances. Its main goal was to assess the factors that contribute to a patient's getting to the hospital on time. Among those are both the traffic load in the city's transport network and the workload of its hospitals and medical centers. Yet, how can one help the operator account for all these details and make it so that the patient arrives during the "golden hour"?

Big Data analysis can help with that. When designing the system, the developers accounted for the cyclic and seasonal nature of treatment demand, the population's daily mobility, as well as the workload of healthcare institutions. This approach allowed to solve two tasks: optimize the ambulance's routes so as to decrease the time spent on delivering the patients in different conditions and improve the ambulance stations' operating procedures.

"We launched this project in 2015 and we are still working on it; on the initial stages, there were some issues with getting data from the healthcare system, but I hope we're already past them. The results we got were very interesting, comments Dmitriy Kurapeev, -and we hope that our project will expand in the future. Ultimately, it will be included in the Healthy City concept in the development of which ITMO University actively participates. Amongst the future tasks are expanding the range of diseases for which we can use our decision support system. Also, we hope that the quality of e-documentation management will continue to improve, as prior to giving any advice, we have to gather the necessary amount of data"

The Almazov Center and ITMO University's High-Performance Computing Department also conduct a joint Master's program Computational Biomedicine. It aims to train highly qualified specialists in the field of information technologies that can effectively use predictive modeling and Big Data technologies for the fields of translational medicine and healthcare. During a recent tour of the Almazov North-West Medical Research Centre, ITMO's Master's students had the opportunity to see how modern medical information systems work, as well as learn which software medical specialists will need in the future.

This summer, President Vladimir Putin signed the Telemedicine Act that stipulates the issuance of electronic prescriptions and rendering of remote healthcare services. The Act comes into effect on January 1, 2018. At the Federal Almazov North-West Medical Research Centre, about 3,000 patients received remote consultations in the course of the last six months of the previous year; also, the center regularly conducts remote consultations for the medical staff of hospitals and medical centers from different Russian regions. According to Vadim Gilvanov, Federal Telemedicine Center's Director, using the remote consultation system has become possible thanks to the introduction of e-document management.

"How do we process requests? We have three operators in the central processing station, two of them are doctors. Each year, they process more than 5,000 requests. It works as follows: we get a request from a patient who wants an examination, so we send him a template with the list of medical documents, records, images and the like he has to submit. After we get this package, we have to check whether it's complete and analyze each document. The latter is very important, as the images are to be relevant - i.e. done no more than 6 months before admission. If it is a hospital we're working with, they usually know the procedure. We use our own information cloud, and all the information comes via a protected channel," explains Vadim Gilvanov.

The center works according to a model that allows to conduct remote consultations. For instance, specialists from the regions can be consulted by the center's doctors; for instance, such a format is used for ultrasound scans. The doctor can conduct an examination remotely and issue a conclusion based on the data provided by the on-site specialist. Despite the center having fully switched to e-documentation management, the present software still doesn't provide for all of the possible opportunities. For instance, the center lacks software that can process medical statistics, and the doctors still have to use Excel to keep track of particular data.

Finally, the center also provides for distance education which gives the opportunity to organize the continuous post-degree education for medical specialists. This comes in different formats - from educational modules to webinars and workshops on 34 program tracks. Also, the Center offers distance preparatory courses to its own residency training.

Each medical institution graduate surely remembers lessons in the dissecting room. Now, students can also make use of modern anatomy visualization systems and special mannequins that allow for training both manual and surgical skills. One of the Center's best features is that it has both simulation education systems and access to real surgical wards, delivery rooms and lecture halls. As of now, it has 25 different simulators, including those of infants that are used to train the procedures of solving various emergency situations following different scenarios.

"All of the simulators are connected to computers, and the programs include several emergency conditions that are possible in infants. Other programs are used for different simulators, the 28-week baby, for instance. All of the students' actions are recorded by the program so as to analyze them later. Also, depending on a trainee's actions, the mannequin can change the color of skin tissues, cry, etc - all of it means that the doctor conducted some mistake" explains Ms. Matveichuk. VR is widely used in computer games, business, space science and education. As for medicine, it's been long used to mitigate pain, treat phobias and the post-traumatic stress disorder, as well as for training surgeons and dental professionals. For instance, both interns and practicing surgeons from different regions of Russia train with the laparoscopic virtual simulator at the Almazov Medical Center.

The machine looks like a computer connected to a special module with peripheral tooling, and helps train different surgical skills: while operating the tools, the trainee can see the progress on a display and react to different emergencies. The simulator's programs allow modeling various situations, as well as train both fundamental and advanced skills. "The model looks really natural. You can see and learn how the tools move during the treatment; also, the device leaves no room for mistakes, explains Nikita Ryabokon, obstetrics and gynecology doctor and research associate at the Almazov Medical Center and Research Laboratory of Reproduction and Women's Health. All of the tools are interchangeable, also, one can edit the tasks: for instance, limit the number of completed actions or the size of the surgical site, as well as upload a particular medical case."

Commonly, students spend three to four days on training fundamental skills; some learn to work with the simulator faster, some take more time to get used to it. According to Mr. Ryabokon, there are no Russian counterparts of this simulator, though the doctors would've already liked to use some new simulators with better feedback options and a more detailed model of internal organs.

"This is a U.S.-manufactured simulator, it costs about nine million rubles ($150,000 -- ed.). Thus, I believe this field to be very promising, as simulation education is becoming mandatory for all medical students," shares the doctor.

After the tour at the Federal Almazov North-West Medical Research Centre, ITMO's Master's students attended a lecture by Lev Gerasimov, Candidate of Medical Science and Philips specialist in applying IT systems, who spoke about the company's experience in the computerization of intensive care units and surgical wards.