A project by ITMO University’s SCAMT Industrial Lab has been named the winner of the 2019 St. Petersburg Competition of Best Innovative Projects in Science and Higher Education. The awards ceremony took place as part of the 12th St. Petersburg International Innovation Forum. The winning project, First Aid, is an innovative treatment for post-surgery scarring, stretch marks, cuts, and burns for patients of all ages. The project is being developed by the Master’s and PhD students of ITMO’s ChemBio Cluster. Olga Sokolovskaya, the head of the project, spoke with ITMO.NEWS about this invention, results of the team’s research, and their future plans. 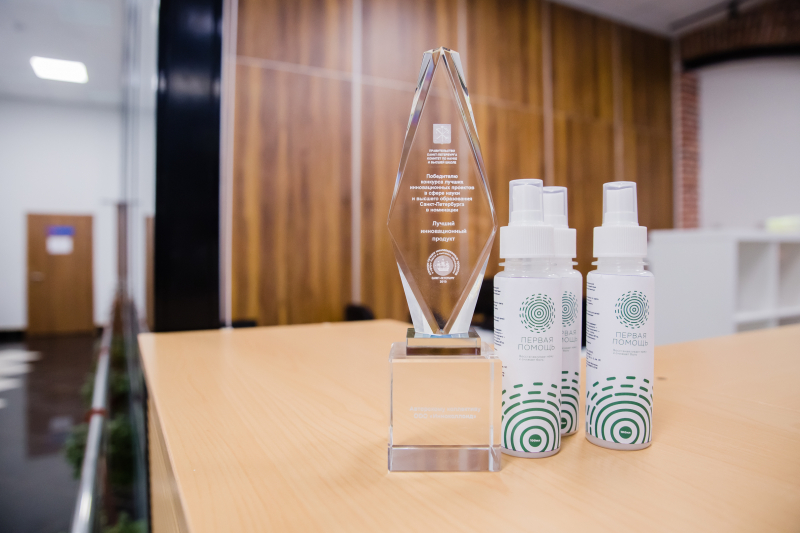 A project by ITMO University researchers was chosen as a winner of the Best Innovative Product nomination. The project, First Aid, was developed by the SCAMT Industrial Lab, which creates innovative products and improves on existing commercial products for medical, fire safety, and household use.

According to Olga Sokolovskaya, a Master’s student at the ChemBio Cluster who heads of the project team, the idea for First Aid was born five years ago. Its creation was preceded by a lengthy period of research, during which an international team made up of chemists, biologists, and medical experts began a study of boehmite, an aluminum hydroxide and an inorganic polymer, which later became the primary component of First Aid.

Their research found that boehmite is conducive to the active growth and reproduction of fibroblast cells, which eventually form blood vessels, helping to reduce the area of scar tissue. It also turned out that boehmite serves as the perfect matrix for other components of the product: each component is released at the right time, resulting in accelerated regeneration of tissue.

All this provided a reason to continue the research and create a new product intended to restore skin tissue after a wide range of injuries. The project was supported by the National Program for Development of Pharmaceutical and Medical Industry and a grant by the Russian Foundation for Basic Research.

Today, the project team is comprised of Master’s and PhD students of ITMO University. The project is supervised by Alexander Vinogradov, the head of the ChemBio Cluster.

First Aid is a salve that helps patients restore skin damaged by cuts, burns, lacerations, post-surgery scarring, and stretch marks. As Olga Sokolovskaya explains, its range of application is wide, as the medication works with any skin injury that could be classified as a “scar”. The salve is made from natural ingredients and does not contain chemical flavoring or coloring agents, thus reducing the risk of allergic reaction.

“A scar or stretch mark, which are formed in place of a cut or other injury, are different from regular skin tissue in that there is no time for blood vessels to develop properly. In other words, the skin grows back, but the vascular tissue doesn’t, which creates a noticeable difference in skin structure. The properties of our product’s inorganic component, as we’ve found earlier, stimulate the growth of vascular tissue. And that is its main intent. In addition, the salve sort of pulls the skin back together by way of synaeresis: the liquid incorporated into it evaporates and the polymer “shrinks”. This micromechanical effect also serves to reduce the damaged area,” explains the head of the project team.

The team has conducted a series of tests of their product; pre-clinical trials were conducted on lab mice. These experiments showed that, in the case of burn damage, the use of First Aid reduced the resulting scar by at least two times compared to other products available on the market.

The salve has also been tested by first volunteers. Four months ago, the team involved human subjects in the testing of First Aid, who also confirmed its effects, says Olga Sokolovskaya.

Today, the researchers are preparing for the market release of their product. At first, they plan to distribute it independently while investigating demand as well as upscaling opportunities. In addition, the project’s win in the Competition of Best Innovative Projects in Science and Higher Education may help in attracting more investors to the project, adds Olga Sokolovskaya.

“The competition is well-known within the city, and it opens up new opportunities for communication with potential investors. I believe that our victory may be conducive to its further development. Besides, it has motivated us to keep moving and work on other projects, as well. It’s important to see your work being recognized,” she explains.

The young scientists plan to continue their research, too. As the head of the project team notes, the product’s main component – boehmite – has other interesting properties that should be investigated more thoroughly.

“This material has a fascinating property: it can be used as a carrier matrix for various protein structures. Applications for proteins are limited by their very low breaking temperature (merely 40°C), but we’ve discovered that if we incorporate it into a boehmite matrix, the breaking temperature is increased almost twofold. This could potentially be used in medical research, which is why we’ll continue our research on this subject,” concludes Olga Sokolovskaya.