Last week, ITMO University hosted the annual EVA SAINT PETERSBURG Electronic Imaging & the Visual Arts international conference organized by ITMO's Design and Multimedia Center and the Department of Engineering and Computer Graphics. The event itself was a discussion platform for both technical and non-technical scientists where they discussed different cases of combining culture and technology. One of the major topics was the use of VR and AR technologies for promotion of culture and arts. 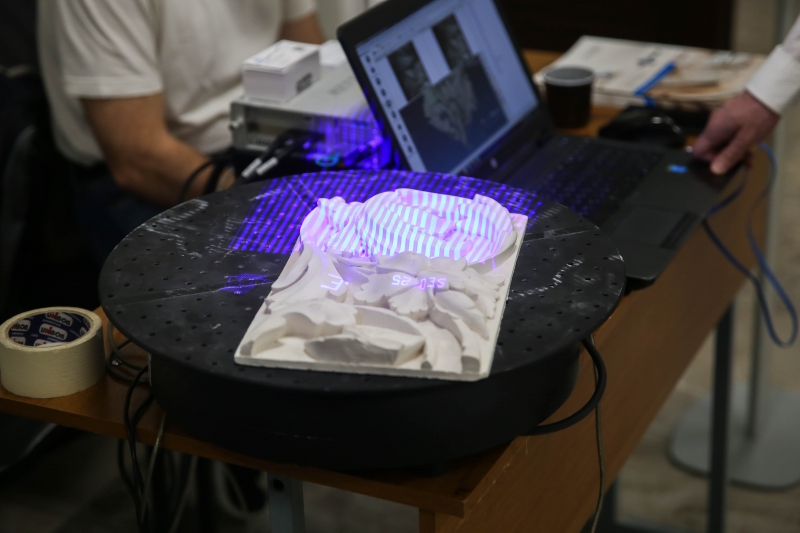 The first speaker was Professor Jürgen Sieck from HTW Berlin. He spoke about his and his colleagues' projects in Germany and Africa. These projects vividly demonstrate the possibilities offered by VR and AR technologies for a wide range of applications: virtual museums and galleries, applications in the field of cultural heritage, tourism and traveling, digital theaters, museum management and the like.

VR in a museum environment

Adding multimedia technologies to the communication between a visitor and the exhibit is becoming all the more widespread. According to specialists, it is convenient and totally safe for the exhibits. A good example of that is the use of holographic displays. For instance, Jürgen Sieck and his colleagues have created a hologram of an exhibit - a pyramid, and added touch screen functionality to the glass in front it. This interactive display allows the visitors to interact with the exhibit, i.e. rotate it using simple gestures. Two additional screens provide visitors with additional information depending on the rotation angle.

Thus, different bits of information are linked to particular rotation angles or, if there are several objects on the screen, to different objects. Even the lighting can be adjusted depending on the angle, and additional lighting can be used to highlight certain details.Users can interact with the exhibit, rotate it in real-time mode and watch it from every side. Jürgen Sieck also spoke about a VR application designed to help tourists navigate the museum's infrastructure and find areas they might be looking for: exit, toilets, cafes and the like.

According to the professor, Concert Hall Berlin now provides a unique opportunity to watch the concert from where the musicians play. The use of AR technologies allows viewers to see what's happening on the stage in great detail, and special indications popping over the musicians show the instruments they use and the sounds' intensity. The concert hall is fixed with several cameras that allow choosing the point from where one wants to watch the concert, and VR technologies let one watch the concert online, "stand" near the director and see the hall from up the stage.

Kishikishi is a special project developed in collaboration with Sieck's colleagues from Namibia. This is a book for African children that includes VR content: invisible elements that can be discovered by using a smartphone. As soon as one looks at the book through a smartphone's screen, it comes alive: trees start to grow on its pages, animals move and the like. A simple menu allows children to easily navigate the virtual book. The specialists also used VR digital content - pics, videos and animation - to make livelier advertising booklets for tourists who want to come to Namibia.  The use of informational technologies and VR elements allowed to bring the marketing to a whole new level. Similar to the Kishikishi book, the booklets include interactive visualization of the African landscape: the customer can see how elephants and butterflies move through the booklet's pages, as well as learn interesting facts about some of Namibia’s animals.

Armlets with Himba national designs is yet another African project. They clearly demonstrate the new possibilities in design offered by the introduction of AR technologies: 3D animation and video scanning. The designs were inspired by Namibia's animals, sceneries and its rich history, and reflect both Namibia's traditional art and the artists' unique perspective. When scanning the armlets with a smartphone, one can see different images appearing on its sides - Himba natives or wild animals.

At the conference's interactive zone, each participant could see student projects in the field of VR and AR. ITMO University was represented by a project by Valeria Vagapova, student at the Department of Engineering and Computer Graphics. The student created a VR location for the HTC Vive headset by interpreting a part of Bosch's Garden of Earthly Delights. "We took one of the painting's elements - the fountain, and used the idea to create a location for the HTC Vive headset. We've put the fountain into space and made it interactive. In VR, the user sees the animated fountain (the water flows, and the like), and a whole star system around it, where they can travel. Thus, we've created our own interpretation of the artist’s work based on VR technology," explains Artem Smolin, head of the Department of Engineering and Computer Graphics and chief engineer of ITMO's Design and Multimedia Center.

Other projects presented at the conference were the ones created by Saint Petersburg State University's graduates. Yuri Bulavin presented his IT-Sound project - a system that automatically generates music depending on the user's mood.  In a split second, the system creates musical compositions. The melody is generated according to an algorithm that complies with the rules of musical theory, and each new melody is unique. Also, students from Saint Petersburg State University presented their Timemelody startup - a virtual museum of musical instruments, where one can hear the sound of any of the exhibits.