An international group of scientists from ITMO University, University of Amsterdam, and Indian Institute of Science continue their pioneering research on crowd behavior. Based on data collected in the aftermath of the 2016 Indian religious festival Kumbh Mela, which lasted for two months and gathered more than 65 millions of pilgrims, the scientists have conducted a comprehensive analysis of how different types of obstacles impacted the flow of human crowds. The festival’s main venue attracting the largest number of pilgrims, the Mahakal Temple was chosen as a case example. Research findings were published in the Journal of Computational Science. The project was supported by the Ministry of Science and Higher Education of the Russian Federation as part of ‘Strategic research areas for Russia’s science and technology sector’ 2014-2020 federal target program. 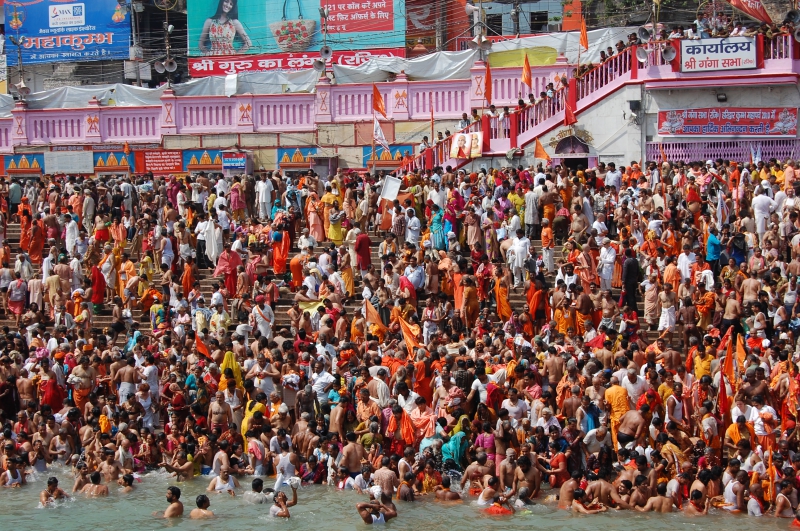 Which research technologies were used

The scientists used portable GPS trackers, drones, and cameras to garner the research data. More than 3,500 surveys completed by festival pilgrims and collected by volunteers were also examined in order to identify the degree to which the Kumbh Mela participants had planned their walking routes.

Using the obtained survey and GPS-tracking data, the scientists were able to establish how and where the pilgrims preferred to spend their time at the festival, as well as how they distributed their time between the festival’s venues, and how much people these venues attracted. The GPS trackers also enabled scientists to gage the speed with which the flows moved around. Several experiments were conducted showing which distances people were ready to go through when influenced by different factors. All this helped the scientists develop a Kumbh Mela territorial layout where obstacles and existing architectural structures are combined to enhance participants’ safety in crowded festival venues.

For a mathematical description of the human flow dynamics, the scientists opted for the multiagent modelling method. It depicts the crowd behavior in terms of general human flow trajectory and velocities of individual agents, who control their own behavior but are also influenced by external factors such as the location of other agents and obstacles they encounter on their way.

Multiagent modelling addresses the task of short-term forecasting in the ‘what if’ mode. These models make it possible to track how an obstacle placed on the crowd’s itinerary will affect its flow dynamics: while in some places that could risk creating a stampede, in others an obstacle could actually help the crowd progress. That’s why the multiagent models are often used for creating optimal object layouts guiding crowds to the right direction by alternating between different options such as moving to the next object, choosing to exit a dangerous area, or opting for urgent evacuation.

The scientists drew on the PULSE simulation environment to model the human flows behavior. PULSE is specifically used to simulate pedestrian flows during mass gatherings and emergency situations. The program was developed by researchers from ITMO University’s eScience Research Institute in collaboration with the National Autonomous University of Mexico, the University of Amsterdam (the Netherlands), the Massachusetts Institute of Technology, and the Northeastern University of Boston (the US).

How the modelling was conducted

Modification of space through the installation of obstacles is one way to control the flow of human crowds. Carefully placed obstacles coupled with existing architectural structures can be used to improve crowd safety at mass gatherings. Although this concept is well established in the field of crowd dynamics, there was a gap in knowledge concerning a systematic approach geared towards understanding how different types and shapes of obstacles affect pedestrian movement. This motivated the scientists to focus on obstacles that are built from different combinations of columns and barriers.

“In the first part of our research project, we conducted a simulation experiment and a comparative study of crowd dynamics based on four main scenarios of crowd interactions: unidirectional, bidirectional, merging, and intersecting flows, all of which correspond to four shape areas: straight and angular corridors, T-junctions, and intersections. Drawing on these scenarios allowed us to pinpoint common patterns which could be applied to real-world spaces. These findings were then used for placing obstacles in the Mahakal Temple in the second part of the project. Two temple areas were singled out as basis for simulation: a straight corridor and and a 90° corridor rotation,” commented Oksana Severiukhina, an engineer at ITMO University’s eScience Research Institute and one of the research paper authors.

To identify how the placement of obstacles affects crowd behavior, the scientists monitored changes of two main characteristics: the average crowd movement velocity and the speed with which the people exited the festival buildings, with the obstacles creating alternative itineraries for individual agents.

According to one key research finding, columns and barriers not only contribute to narrowing confined spaces and intensifying the flow of pedestrians in corners and constrictions, but also minimize potential collisions and interactions between individual agents. All this streamlines the human flows, reducing their density and optimizing pedestrian movements.

Some types of obstacles cause changes to human flow characteristics. Columns and roundabout intersections regulate pedestrian movements, which leads to the increase in the average crowd velocity, while zigzag barriers significantly reduce the average velocity irrespective of the shape of the space where the movements are taking place. These findings allow for better decisions on obstacle placements to ensure a quick evacuation or efficient management of human flows during mass gatherings. The scientists plan to expand on their research by carrying out more experiments using a more complex set of obstacles and forecasting situations of panic and chaos ensuing in the crowd.

“This project will serve as a foundation for future research dedicated to creating optimal obstacle placement layouts for specific scenarios such as minimizing the time allocated for evacuation or reducing the speed and density of human flows. We also plan for more experiments of placing differently shaped objects in different locations, as well as exploring the factor of crowd pressure. This is vital because the density and average speed characteristics alone fail to give a full representation of how obstacles and other factors influence the crowd dynamics. Another budding research area based on these findings is the spread of viruses during mass gatherings,” said Ivan Derevitskii, an engineer at ITMO University’s eScience Research Institute and one of the research paper authors.