Human behavior analysis is one of the most important and complex contemporary research topics. It can be used for designing safe and reliable structures and spaces to help people during evacuations and other emergency situations. Working as part of a research group, a University of Amsterdam professor Michael Lees has developed a Minecraft-inspired game that was used for studying human behavior in emergencies forcing people to navigate their way through an unknown territory. Prof. Lees unveiled the findings during his ITMO University lecture, dedicated to the development of a new game-based experimental approach aimed at achieving a better scientific understanding of humans. 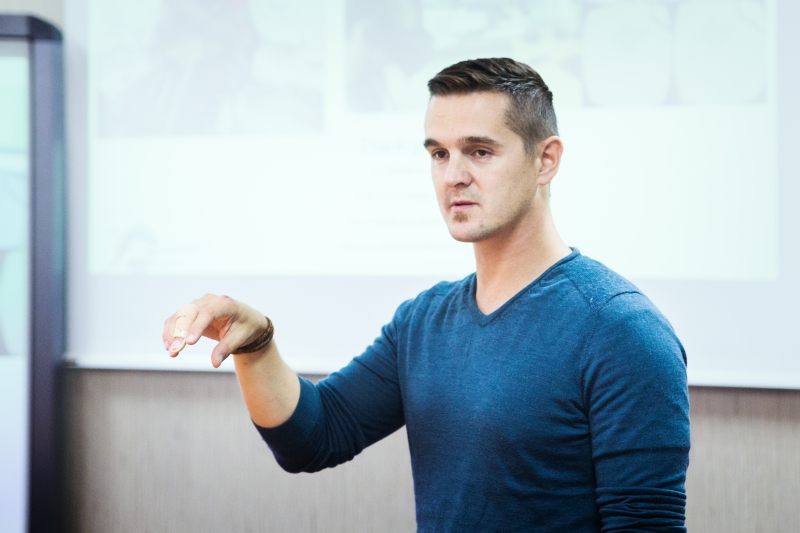 Catastrophes involving human crowds date back many centuries. One of the most large-scale tragedies happened only three years ago: in 2015, a deadly stampede which occurred during a hajj pilgrimage in Saudi Arabia claimed the lives of 769 people with another 934 pilgrims injured, and that’s only according to the official estimates: an investigation by Associated Press put the death toll to over 2,000 casualties. The Mina valley, where the religious ritual is held each year, is no stranger to such disasters. Over the years, Saudi officials have made numerous attempts to improve the adjacent infrastructure: one prevention measure included building a hi-tech bridge to streamline the movement of the pilgrims making their way to Mecca. Designed with the help of computer simulation, the Jamaraat Bridge accounted for a significant decrease in danger, but still failed to prevent the 2015 tragedy. The moral of the story? Even the most high-quality computer simulation doesn’t guarantee a 100% safety rate, believes Michael Lees, professor at the University of Amsterdam.

Two years ago, he and his colleagues started to conduct experiments aimed at pinpointing how humans use memory to find their way in new surroundings. Their research revolves around complex systems that analyze behavior and responses of participants, or agents, placed in challenging conditions of an uncontrolled flow of people. Each agent is defined by a set of parameters that include their age, mobility, speed, emotions, and experience of decision-making. Taken as a whole, this system of criteria enables the scientists to understand how people navigate through unfamiliar environments, in particular, how panic influences their decision-making.

In a bid to understand how people approach their environments and store spatial data, the researchers have created a game in which users have to study their setting in order to search for exit routes. A player is teleported in an abandoned castle with 11 other people imprisoned in different rooms scattered all over the building. The goal of the game is to free all the hostages, open the main doors of the castle, and run away.

The castle is a three-storey building comprised of 44 rooms. Each floor has its own unique set-up, which complicates the player’s mission. During the first couple of minutes, players are briefed on the plot and given an interactive tutorial on how to use the controls and, essentially, play the game. After being walked through saving the first detainee, they finally set out to free the others on their own. The researchers define this first part as a surroundings study, comparing it to trying to orient yourself in a huge new shopping mall. Setting free the last prisoner marks the start of a new stage which tests the knowledge the players acquire during their long castle ramblings.

“By not giving out the premise of this second stage at the start of the game and concealing the placement of the tasks, we ensure that a player won’t be too preoccupied with remembering locations, which could otherwise lead to non-organic changes in their already established cognitive map. Having freed the last captive, the player is instructed to go to the castle’s gallery, a room they should have already examined during the first part of the game. This is the only location with painted walls, which increases the probability of the user’s remembering this place because of its inconspicuous significance. The game is built in such a way that in order to be able to complete it successfully, you don’t necessarily have to pay attention to every single detail you encounter; all that’s needed are your natural, sometimes even reflexive, memory responses. We decided to conduct our experiment within the well-known environment of a popular game Minecraft to reduce the time and effort spent on the development aspect, instead focusing on our priority of creating a flexible environment,” explained Prof. Lees.

The research project drew on a sampling of 44 players represented by 13 women and 31 men aged between 18 to 30 years old. Even Minecraft novices could participate in the game, which will take 30-45 minutes depending on a player’s experience. The data was gathered over the course of four weeks.

“The game’s main checkpoints were all placed in such a way that by the end of the session, each user would have completed about 90% of the surroundings. During the first part dedicated to studying the location they find themselves in, the players have to solve three consecutive tasks in three different rooms, one room per each floor. Participants don’t have access to maps, neither are they given any indicators to guide them in their journey. But each room is prefaced with a simple text that mentions its name and gives a general description of its line-up to make the task a little bit easier,” said the researcher.

All participants were tested on one computer in laboratory conditions to ensure minimal disturbances. They were given five minutes to familiarize themselves with the rules of the game and test the waters using the knowledge acquired during the tutorial phase.

“We envisioned a new game-based approach that facilitates experimental research of movement patterns. Although similar methods were used for analyzing crowd behavior in a more general way, we believe that this experiment marks a first time of studying how memory impacts behavioral processes. Users’ movements have let us in on several important findings. First, a person’s memory plays a defining role in how they approach a new environment, however other factors like color and design of a location, as well as how interesting it is for a specific player, can also be of significance. Still, it’s important to note that games alone don’t provide us with 100% accurate data, so it would be great to see our findings applied to some real-life cases,” commented Michael Lees.