Researchers from ITMO’s ChemBio Cluster have developed a mechano-bactericidal toothpaste based on calcium carbonate. Tests have demonstrated that it is two times more efficient than conventional antiseptic toothpastes in removing the bacterial dental plaque that is often at the root of many oral diseases, including cavities. 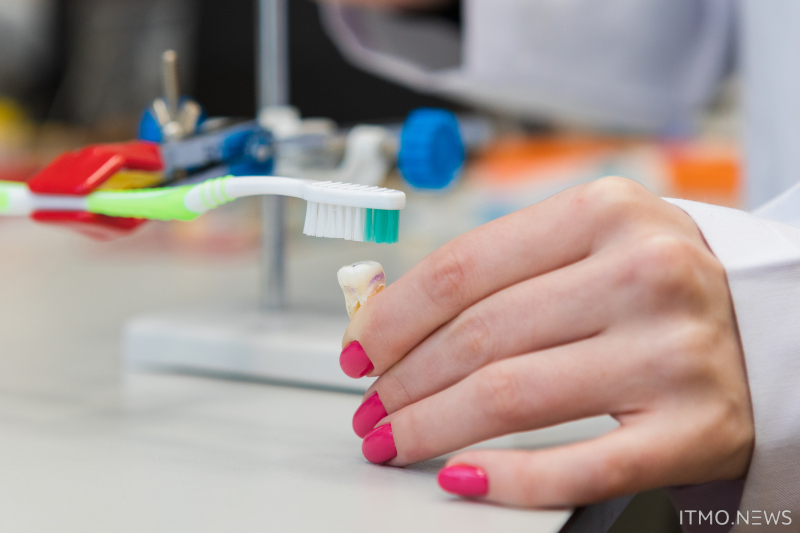 All about the shape

Dental plaque (i.e. bacterial biofilm) is at the root of cavities and gum diseases. A conventional way to beat plaque is using an antiseptic toothpaste with such active components as chlorhexidine, triclosan, and various natural antibacterial agents. These can efficiently remove dental bacteria, however they are not 100% safe for people because their active compounds raise antibiotic resistance in the month and the whole body. Moreover, they can produce unpleasant effects, such as a dry mouth.

Mechano-bactericidal toothpastes can serve as an alternative to antiseptics. They contain anisotropic particles of shapes different to the amorphous ones used in their counterparts. Thanks to their shapes, anisotropic particles do not only kill the bacteria, but also rip their shells, eliminating the cause of cavities.

In order to create such a mechano-bactericidal toothpaste, researchers from ITMO’s ChemBio Cluster have developed and synthesized four new forms of anisotropic particles based on calcium carbonate. This biocompatible and safe material is widely used in toothpastes.

“Despite the fact that calcium carbonate has long been used in dentistry, we are the first to think of changing its shape in the toothpaste. In other words, this chemical compound used to be amorphous, meant mostly for polishing the enamel. The new forms of calcium carbonate that we’ve developed have demonstrated high antibacterial activity: by hitting a bacterial shell they disturb its integrity, producing a bactericidal effect,” explains Larisa Protasiuk, the corresponding article’s first author and a second-year Master’s student at the ChemBio Cluster.

Originally, it was the natural mechanisms that inspired the scientists to experiment with artificial shapes for the new toothpaste. For instance, gecko skin and dragonfly wings are covered with nanospikes preventing the growth of bacterial biofilms. That is why in this project the researchers added magnesium ions to calcium carbonate crystals and developed four new shapes: cubes, sticks, and urchin-like spiked spheres.

Upon a successful synthesis, the researchers had to answer two research questions: how efficient the new shapes are in producing an antibacterial effect and how effectively they remove the bacterial biofilm. First, each shape’s efficiency in killing bacteria was evaluated by placing each type of anisotropic particles in three different concentrations into test tubes with gram-negative and gram-positive bacteria. After 24 hours, the result of bacteria-particle interaction was colored with a fluorescent dye in order to visualize broken bacterial shells and count colony-forming units, the bacteria that had interacted with anisotropic particles. As a result, the researchers were able to identify which shape and in which concentration has killed the biggest number of bacteria. At this stage, stick- and urchin-shaped particles were proven more efficient, however the cube-shaped ones were also kept for the next stage of the experiment, which was removing dental plaque.

For this stage, the scientists grew biofilm in cavities of lab arrays and dyed it before removing it with interdental brushes. The dyed biofilm that remained on the brushes was put into a solution of acetone and ethanol, where a spectrophotometer was used to determine which solution was brighter. It turned out that at this stage, too, stick- and urchin-shaped particles were most efficient in removing biofilm.

After these tests, the researchers also demonstrated the high efficiency of the mechano-bacterial toothpaste in ex vivo experiments on actual teeth. Stick- and urchin-shaped calcium carbonate was 93% better at killing bacteria and nearly 2 times better (over 210% for sticks, cubes, and urchins) at removing bacterial film than its amorphous shape.

The mechano-bacterial effect can allow researchers to lower the concentration of antiseptics in toothpastes, which in turn will decrease the probability of toxicity or other side effects. Moreover, anisotropic particles don’t damage the enamel and are biocompatible with epithelial cells. Additionally, the scientists believe that the new calcium carbonate shapes can have other potential applications.

“The developed shapes help fight bacteria, thus producing an antibacterial effect, and remove biofilm, which usually sits not only on the teeth surface. For instance, they can be used to clean urinary catheters or water, because carbonate calcium is FDA-approved for use in the human body,” adds Larisa Protasiuk.