A voice recorder, a pen, some paper, and a smartphone: with all the journalistic essentials packed, we’re heading off for Sweden to learn about innovations in life sciences. What does it cost to create a molecule, how can mini-factories bring profit, and why do 3D-printers help accelerate production? Read on and find out. 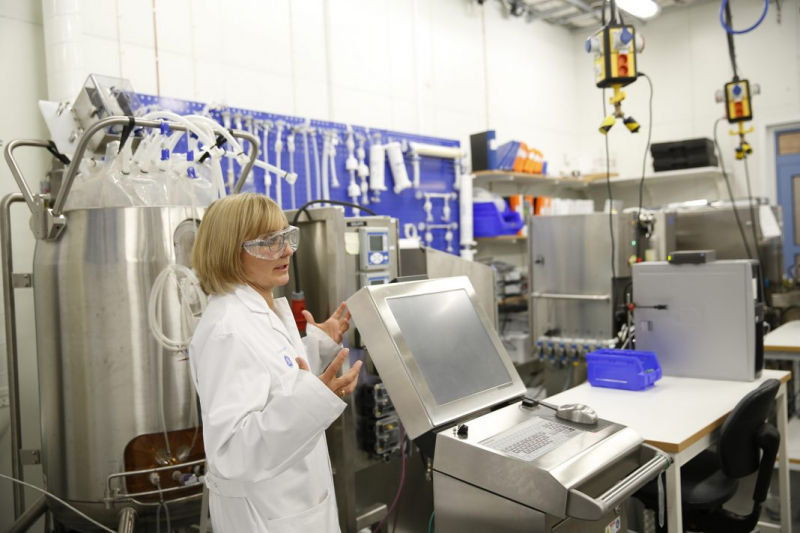 This article by Irina Trotsenko was first published in Russian by ITMO University’s student news portal Megabyte on March 11, 2019.

As winners of the Tech in Media competition, we got to go on a tour of General Electric’s (GE) Testa Center in Uppsala, Sweden. I’ve always associated this corporation with heavy machinery, massive mechanisms, or electric engines; and yet, I learn, they work with biotechnologies… As I wait to board my flight, I ruminate on this and look for information about my destination. It turns out that the GE Healthcare Life Science company founded the non-profit Testa Center in 2018 in collaboration with the Swedish government. Testa Center is an innovation center made up of four laboratories that create new biopharmaceutical products and introduce them to the market. We’ll learn about the opportunities offered to the center’s residents and visit one of the labs, as well as GE’s first (and only) European center of innovative and advanced technologies.

We’re coming up on a building with a sign saying “GE Healthcare”. Beyond it are 2.5 thousand square meters of the innovation center, housing four labs filled with devices used to produce biopharmaceutical products. After an introductory speech, Cecilia Sjöstedt, the CEO of GE Healthcare Life Sciences in Uppsala, tells us how it all began.

In 1959, researchers at Uppsala University (the oldest university in Scandinavia) had first produced sephadex, a three-dimensional polymer of dextran and a fine porous sorbent used to separate molecules using chromatography. Since then, it has been trademarked and entered into production by GE. After all these years, the production process has remained unchanged, but the Testa Center was founded to serve as a test bed for startups, academic research groups, and companies. Those who wish to test their idea or commercialize one and begin production can submit an application, pass the selection process, and produce a pilot batch of their medical, biological, or chemical product. It must be noted that a project’s authors retain the ownership of their intellectual property and their results. Testa Center’s mentors and engineers help them out with expertise and provide working areas, equipment, devices, and materials, such as sorbents.

“Upon becoming the center’s residents, the participants pay a fee of approximately 10,000 euros or less per week, depending on the kind of materials and equipment they are using. When choosing candidates, we give preference to Swedish startups, but we’re interested in international collaboration, too. Foreign researchers can also join Swedish scientists and apply together,” says Lotta Ljungqvist, President & CEO GE Nordics and CEO Testa Center.

It all might seem very expensive at first. But such investments help startups save time and effort. A team running an innovative project may not be sure in the success of their invention, or not have the means to test and develop their product. “It costs 4 to 5 billion USD to produce one new molecule”, explains Andrey Demurin, CEO of GE Healthcare Life Sciences in Russia and CIS. The residents of Testa Center don’t need to form their own production lines or invest money in trying to understand whether their project will make profit.

The official presentation is over, and the smiling Dodi Axelson, head of communications at GE Healthcare, is rushing to take us on a tour to learn about the opportunities and tools offered to the residents of Testa.

A cauldron of broth

We put on our robes and glasses and enter a bright room filled with a variety of devices. Lotta Ljungqvist shows us a massive metal bioreactor used for growing cells, and the chromatographs attached to automated control systems.

“Research labs often use the same equipment as ours, but much smaller. While they conduct the same experiment for 200 times, we can do it all in one go,” says Ms. Ljungqvist.

The scale is, indeed, impressive; the bioreactor has a volume of 500 liters. Our tour guide tells us that, when scientists need to grow a particular cell culture, they put the elementary cells into this “cauldron” along with a nutrient solution. The reactor itself is a massive thermostat that maintains a specific temperature while a bag of thick plastic rests inside. That’s where the cells are growing. In two weeks, they will turn into useful biological material. However, it can’t be used just yet. First, unnecessary elements must be removed through chromatography and filtration. In average lab conditions, purification of, say, proteins, can take anywhere from several days to two weeks. Lotta Ljungqvist proudly shows off a machine that does all that in just 11 minutes.

As it turns out, the lab was set up in such a way to demonstrate its capacities to the center’s new residents. In fact, the list of devices and their placement are dependent on what’s needed by the researchers. Each resident can bring their own samples, products, or materials and use Testa Center’s equipment for their research. However, the rules prohibit working with dangerous infections, like working on an Ebola vaccine, or bringing in and using radioactive materials.

Print me some… cartilage

We approach what looks like an office building. On our way up the stairs, we meet some enthusiastic Testa Center employees heading to lunch. Meanwhile, we enter the 3D-printing and design lab, the Innovative Design and Advanced Manufacturing Technology Center. Engineers Andreas Marcstrom and Klas Marteleur tell us about how 3D-printing technologies are becoming increasingly widespread in various industries. Here at Testa Center, they are used, among other things, to create details and elements of biotechnological devices. Such as the protein purification system we had seen in the demo lab. Because each production line is tailor-made for each specific resident, it ends up being quicker and cheaper than building everything from the ground up.

This isn’t my first time around a 3D printer, but I am astonished by the materials used to print the parts and their shapes. Chainmail, a skull, kaleidoscopic patterns… They even show us a printed titanium cartilage implant. All of the objects here can be made from steel, wolfram, polyamide, polypropylene, acryl, nylon, and other unusual materials. The variety of sources helps produce all sorts of shapes and textures, as well as regulate the density and flexibility of the final objects.

The staff let us watch how a steel part is being made. We peek into a rectangular window and see the print head apply thin layers of metallic powder, which are welded together by a laser. After printing, each part is polished with abrasives and detached from the printing plate.

To show us the difference between printed parts and those made by other methods, Klas Marteleur gives us two metal parts. The difference is immediately evident once you take them into your hands: the printed part weighs half a kilogram, while its counterpart welded together from separate parts weighs three times more. Aside from visual and weight differences, explains the engineer, there is also a difference in durability; the printed part lasts longer and is more resilient due to not having any seams.

In addition to 3D printers, I notice the lab’s assortment of automatic and semi-automatic milling and drilling machines, lathes, various hand-held devices and tools, sets of drills, hammers, wrenches, and screwdrivers. All this is needed to work the parts after they’ve been printed and to create elements for lab equipment.

As our tour ends, we exit the center and see an Alfred Nobel quote written on the wall: “Worry is the stomach’s worst poison.” Perhaps we, too, should go and settle our stomachs’ worries?