Ekaterina Maslova, a third-year student at the School of Physics and Engineering, does fundamental research: she studies bound states in the continuum and quasicrystals entering the metamaterial regime. At the same time, she’s engaged in scientific projects with university and school students. Ekaterina shared why she chose to work in this field, what it’s like to do fundamental research, and how important it is to involve school students in research. 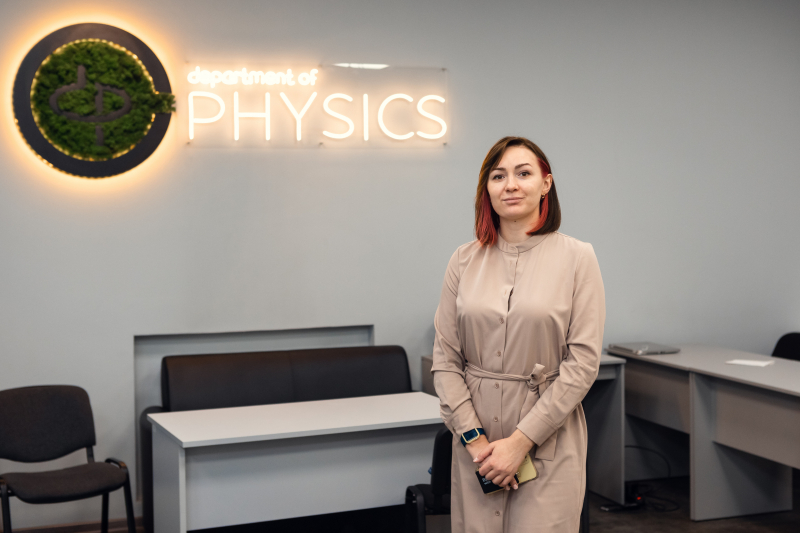 Why did you decide to study physics?

When I was at school, I was really into chemistry, physics, and math. I guess I understood the point of hard science more than that of humanities. Plus, I loved doing experiments and solving tasks creatively.

All this fascinated me and I didn’t hesitate when choosing my field: I knew I wanted to do science, the only question was whether it would be fundamental or applied research. I was also inspired by a school teacher to study physics and decided that I should go to St. Petersburg and apply for Peter the Great St.Petersburg Polytechnic University.

I considered ITMO University as well but at the last moment, chose Peter the Great St. Petersburg Polytechnic University. People around me believed that this was the right choice for me and I back then, I didn’t know much about ITMO myself.

When I joined a Master’s program at ITMO, I realized that here people do quality research and receive support. Here, at least at our School of Physics and Engineering, you get regular updates on available internships, scholarships, and contests. Our students often study abroad and sometimes get invited to stay there, be that Europe or Australia.

What was your Bachelor’s thesis about?

I studied at the department of physics of condensed states and we wanted to assemble an installation for photofragmentation of molecules of organic substances. My task was to determine and calculate parameters for it. However, there was no real outcome to this work: we described a possible design but there was no implementation.

When you’re new in science, it’s hard to not see any palpable results and that’s why you might feel like switching fields. That’s why I joined ITMO once I had the chance.

Did you continue to study the physics of condensed states at ITMO?

In 2017, my Master’s program was called Photonics of Dielectrics and Semiconductors (now it’s Physics of Semiconductors) but basically it was also related to the physics of solid bodies.

As of now, I’m working at the research group headed by Mikhail Rybin. It was formed a year ago and for now, we all are engaged in different fields, such as quasicrystalline structures, metasurfaces, and hybrid anapole states. There are both experimenters and theoreticians among us and sometimes we do joint projects with other teams. For example, I’m working on a project together with Zarina Sadrieva from Andrey Bogdanov’s team.

What are your projects about?

In my research group, I’m studying phase changes in quasicrystalline structures and observe how they switch from a photonic quasicrystal to the metamaterial regime. It’s a fundamental research so we won’t end up with an actual product but the achieved results will be applicable in laser engineering, sensors, and nonlinear photonics.

Some theoretical researchers tend to get the feeling that they’re tired of fundamental research and want to be in an applied field. Has this ever happened to you?

Sort of, but it wasn’t too drastic. It’s just that I’ve been working at my lab for almost five years now and when you’re immersed in solely fundamental physics, you start to consider doing something more palpable. For example, if our project involves an experiment, I can ask my colleagues to explain it to me so that I could conduct it myself.

How come you’re doing research with both university and school students?

Our PhD program allows you to become a lecturer’s assistant and help them conduct seminars and check homework. Alternatively, you can manage student projects, for example, complete a short-term research project with several students.

School students can be involved too, but in their case, it takes a year. We begin in October and finish in April, so that they would be able to participate in Sakharov’s Readings – it’s often school students from the Alferov Physics and Technology School that participate in our projects and I think they are particularly interested in this event.

How significant are research projects with school students?

Pretty significant. For example, last year I worked with a school student, Kliment Semushev. He and I modeled a quasicrystal with octogonal symmetry instead of a classic Penrose tiling. Kliment wrote a program to generate it, we studied the field distributions, and concluded that a metamaterial regime is also possible for such a structure. Kliment presented this research at the XXXI Sakharov’s Readings and was awarded a special diploma. Also, based on the work, we wrote proceedings and submitted them to the Metamaterials international conference, which is a great result for a school student. Sure, it’s only proceedings, but at the international scale.

I feel like this confirms that at ITMO, research is welcomed and promoted – even as a school student you can achieve great results. At the very least, you will get acquainted with how scientific research works and there’ll be something to add to your portfolio – regardless of which university you will apply to.

I’d like to stay at ITMO; I like working here. I’ll continue my scientific career and work on our new projects. I feel like now I have at least a year’s worth of research plans.

At the same time, I’d like to keep working with university and school students. It helps you achieve real results much faster than in large research projects. Plus, you get to inspire young colleagues and let them get involved inscience. I didn’t have such an opportunity in my time, so I think it’s really important.