An international group of physicists has developed a topological nanostructure that converts infrared radiation into green light. It is represented by zigzag arrays of silicon nanodisks with diameters of 500 nanometers placed on a glass substrate. The results have been published in Nature Nanotechnology. 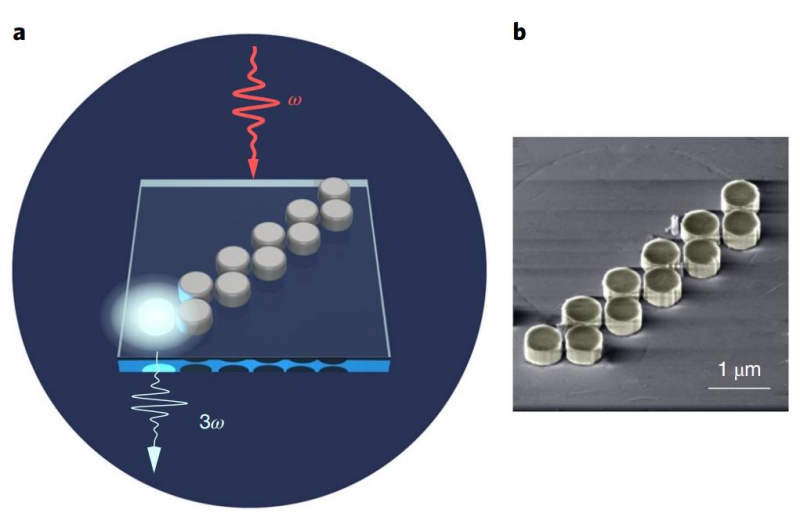 Topological photonics predicts how photons interact with the medium and how to make these particles bypass various material defects suppressing backscattering. Learning how to transmit an optical signal over long distances can make computation and communication systems more efficient. Theoretically, nonlinear devices for light direction, intensity and wavelength control have been described several years ago. However, so far, researchers haven’t managed to realize such topological structures at the nanoscale.

A group of scientists from Russia represented by ITMO University, the Ioffe Institute, Moscow State University, and the Nizhny Novgorod Institute of Applied Physics, together with colleagues from the USA and Australia demonstrated the first nonlinear photonic topological structures at the nanoscale. The group of researchers, led by Professor Yuri Kivshar, designed and fabricated zigzag arrays of silicon nanodisks placed on a glass substrate. The nanodisks, each with a diameter of 510 nanometers and height of 300 nanometers, were placed at a distance of 20 nanometers from each other. When the researchers excited an array with infrared light, it generated a green light at the other end of the chain. Thus, the structure proved to be capable of topology-controlled nonlinear light generation.

In a series of further experiments, the researchers confirmed that the nonlinear light generation proceeds resonantly from topological edge states of photons at the edges of the array. Then the scientists examined the degree of which the nonlinear optical properties of a nanostructure depend on its defects and inhomogeneities. The structure turned out to be extremely robust to modest changes in its geometry. The results of experiments have been supported by an advanced theoretical model.

"These days, science is becoming increasingly international, removing the boundaries between countries and continents. This work is a good example of such development: the idea from Russia was implemented in the structures made in the USA and then realized in experiments performed in Australia. Later, sophisticated experimental results were explained by young scientists from Russia. We hope that this work laid the foundation for a new direction of research in this field: nonlinear topological photonics," said Prof. Yuri Kivshar, Research Director of the International Center for Nanophotonics and Metamaterials at ITMO University, Professor of the Australian National University.

“Our work has shown that unexpected topological optical properties can manifest themselves even in such relatively simple structures as zigzag arrays. Thus, the observed third-harmonic radiation can switch from one edge of the array to another, depending on the direction of illumination of the zigzag array: from the substrate or the air side. In the future, such asymmetric generation can be used to create nanoscale nonreciprocal optical devices such as optical diodes and transistors,” added Dr. Alexander Poddubny, a researcher at ITMO University’s Laboratory of Metamaterials.