The newly-developed elements have found a use in the detection of dangerous molecules in a given medium. Laser recording methods make it possible to integrate various functional elements within the glass chip. 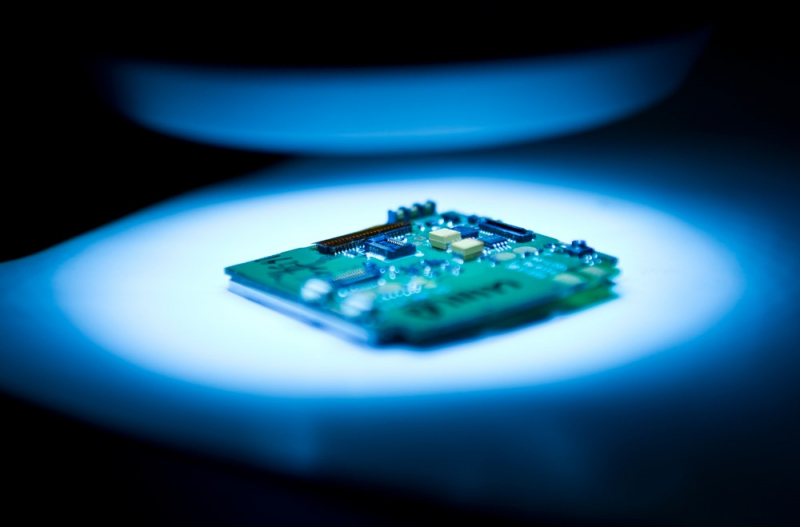 Optofluidics is a new field of research that has garnered much attention in the past decade. Its key concept is the fusion of nanocapillary media and optical elements within a single glass chip for fundamental applications in science and tech. The goal of research in this field is to make it possible to detect minute amounts of molecules in water or gaseous media.

“Our team designs, produces, and tests a whole range of functional elements in silicate materials to create nanofluid optical elements and systems-on-chip (SOC),” explains Roman Zakoldaev, a researcher at ITMO University’s Faculty of Laser Photonics and Optoelectronics. “Today, we presented a fluorescent waveguide sensor that is integrated into porous glass.”

A special type of silicate glass, simultaneously transparent and interspersed throughout with nanocapillaries, was chosen as the substrate of the sensor. The size of these capillaries ensured the free capture and transfer of molecules of both the indicator and the detected substance through the entire volume of the substrate. Ethanol was used as the detected substance because of its commonplace usage in biomedicine and the small size of its molecules.

“We chose this type of glass due to the unique combination of its properties: it is highly optically transparent, strong, and adsorbs molecules from the surrounding environment well,” explains Zhong Lijing, a PhD student at the Faculty of Laser Photonics and Optoelectronics. “At first glance, the latter property may seem like a downside, but in sensorics, it’s a substantial advantage.”

To improve the efficiency of existing optical sensors and eliminate some of their drawbacks, researchers from ITMO University have proposed a new type of functional element: a voluminous waveguide located within a transparent nanocapillary medium. In such a set-up, the waveguide’s optical properties depend directly on the properties of the molecules captured by the medium, while its sensitivity is determined by the presence of the indicator.

The creation of this element is the result of many years of research conducted by the team over the past five years. In that time, they’ve identified the most fitting material for creating the waveguides and worked out the best ways to create them.

“Direct laser-writing of waveguides and other functional structures in optical materials significantly expands the capacities of modern nanocapillary sensors by way of combining the unique properties of the original material and the element formed within it,” says Maksim Sergeev, a researcher at the Faculty of Laser Photonics and Optoelectronics. “To us, powerful laser pulses become a high-precision instrument with which to process optical materials. As a result of laser impact, a more resilient structure is formed that acts as a waveguide while eliminating the possibility of the material being destroyed.”

But simply having such a nanocapillary-based waveguide turned out not to be enough to create the right sensor. To allow the waveguide to react to ethanol, indicator molecules were embedded in its outer medium. When excited, these indicators produce green light, resulting in fluorescence. Introducing ethanol into the medium caused the fluorescence peak to shift into the red part of the spectrum.

As a result, the research team from the International Laboratory "Laser Micro- and Nanotechnologies" was able to demonstrate the viability of waveguides within nanocapillary “shells” as functional elements of optofluidic SOCs.

The researchers emphasize that this technology is constantly developing and has undeniable prospects in gas analysis-related applications. The versatility of the sensor lies in the ability to use various indicators.

When detecting other substances, such as methane or any other harmful gas, all that’s needed is to choose an indicator sensitive towards that substance. Another feature of the proposed technology is that it is possible to produce several waveguides with various indicators located on a single substrate.

Results of this research were published in Nanomaterials. The research was carried out as part of a grant from the Russian Foundation for Basic Research (grant № 19-52-52012 MHT_a).