Using a complex real-time mathematical analysis model, the researchers will now be able to manipulate the process of creating photonic and plasmonic components in order to produce the exact needed optical properties. 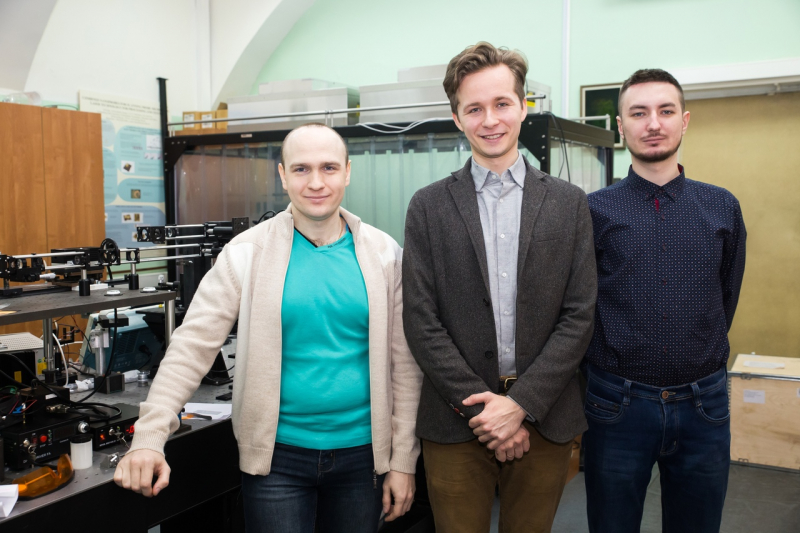 Researchers from ITMO University's Faculty of Laser Photonics and Optoelectronics

Researchers from ITMO University have combined experimental findings and modeling to implement, describe, and showcase one such method, which makes it possible to create micro-scale elements with optical properties that may be modified in real time. All that’s needed is to register transmitted laser power and conduct precise numerical modeling, which makes the procedure cheap and easy to carry out. The researchers from the International Laboratory “Laser Micro-and Nanotechnologies” have also solved the issue concerning the study of those elements created within composites. In addition to the aforementioned procedure, they’ve suggested a contactless method of identifying the volume, concentration, and chemical composition of nanoparticles in any given part of a produced object. Their research was published in Nanomaterials.

What’s it all for?

Research laboratories are constantly developing new materials that are expected to exhibit new properties bound to revolutionize this or that technology. But it’s not enough to simply create these materials; scientists also need to suggest efficient methods of local processing. Oftentimes, composites are made via the addition of nanoparticles into a base matrix; that is why it is necessary to find a way of manipulating the location, size, and concentration rate of these particles that would exclude even the smallest deviations that are invisible to the human eye.

“Laser impact changes the inner structure of materials and makes it possible to change their plasmonic properties. But such processes activate the photo-thermo-chemical mechanisms, complicating the search for optical processing formats.  Conventional semi-empirical methods don’t work here or can't be used to explain the physical and chemical processes involved,” says Maksim Sergeev, a researcher at ITMO University’s Faculty of Laser Photonics and Optoelectronics.

Scientists from ITMO University have suggested a procedure that would make it possible to manipulate the plasmonic properties of composite optical materials in real time.

For millennia, humanity had to adapt to the materials it had at its disposal: metals, wood, stone, minerals, etc. Today, humans have learned to adapt the materials they have to their own needs, creating composite materials out of several components. These materials have new properties and open up new opportunities. They are highly promising in finding solutions to the various challenges of photonics, such as finding ways to create non-linear photoconductive components, plasmonic elements, wave guides, and even color palettes in glass.

“Such materials can be used as optical filters,” explains Pavel Varlamov, a research engineer at the Faculty of Laser Photonics and Optoelectronics. “White light, as we know, consists of a large number of wavelengths and you might need to, for example, highlight or exclude a certain spectrum band, like blue or yellow. That’s what optical filters are for, and they can be used in lasers or refractors.”

Depending on which metal’s ions are added into glass, the resulting composite can be used to manipulate various parts of the spectrum. For instance, if you were to add nanoparticles of silver and copper into glass, it would absorb radiation in the blue-green band. But adding silver and copper nanoparticles into regular glass, such as the kind used to make windows or kitchenware, would be a complex and expensive process involving numerous chemical reactions. That’s why scientists prefer to use special nanoporous glass for these purposes.

Once nanoparticles have been “fitted” into the pores, the material is altered with laser radiation in order to enhance it with new optical properties. Then, everything depends on how accurately scientists were able to change the concentration and size of the nanoparticles, as this will affect the spectral properties of the material.

“The method we’ve suggested makes it possible to create voluminous micro-scale elements with a plasmonic resonance peak that can be controlled in real time,” says Roman Zakoldaev, a researcher at the Faculty of Laser Photonics and Optoelectronics. “The method aims to optimize the parameters of laser altering via feedback.”

The scientists have conducted a stage-by-stage study of the changes in structure within composite materials, and namely:

All this made it possible to monitor the optical properties of the material while it was subject to laser treatment.

But there is an issue: during the treatment intended to “glue together” the components of a new material, metal nanoparticles change their shape and even their chemical composition. Throughout the process, material changes the way it interacts with laser radiation; essentially, it begins to better absorb radiation within a specific band of the spectrum. This presents several challenges for the treatment process.

In order to adjust the laser’s performance throughout the treatment, scientists need to instantly conduct complex calculations of changes that have already occurred and the changes that would need to be made to the laser’s settings. For that, they need a flexible physico-mathematical  model; such a model has become the basis of an algorithm designed to manage the processing of these materials.

The researchers from ITMO University have suggested a physico-mathematical model that would be used to describe the optical characteristics of photonic materials. In particular, it was used to model the optical properties of nanoparticles embedded into transparent solid-state matrices during their photo-thermo-chemical synthesis.

“We were able to propose a calculation algorithm that presents the electronic structure, size, and concentration of nanoparticles with the optical properties of material as one effective medium,” says Maksim Sergeev. “Using the algorithm together with a model of diffusion-controlled growth of particles has made it possible for us to trace the optical changes in laser treatment in real time.”

The model’s functionality was confirmed numerous times when its results were compared to experimental data produced during treatment of glass samples with various nanoparticles. It allows researchers to produce materials with the exact optical properties that were initially factored into calculations.

The suggested method would make the creation of unique optical plasmonic components cheap and easy to handle, opening up new opportunities for their integration into industrial production.