Lasers for All Occasions: Highlights from International Symposium FLAMN-2022

On June 27-30, ITMO University hosted the international symposium Fundamentals of Laser Micro- and Nanotechnologies (FLAMN), a major research and industry event in the field of lasers, where the top experts in science, medicine, industry, and art discussed the future of laser micro- and nanotechnologies and presented their cutting-edge research results. 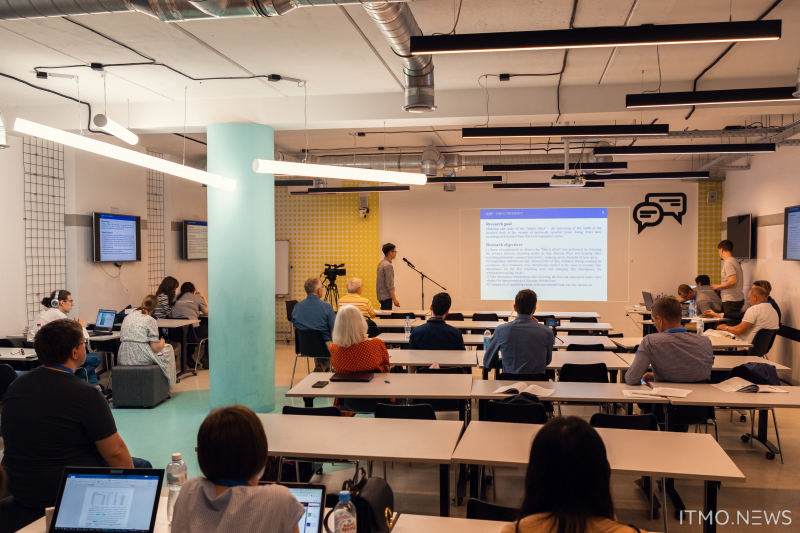 FLAMN has been organized annually by ITMO’s International Research Laboratory for Micro- and Nanotechnology Lasers since 2000 and traces back to conferences Laser Technologies and Non-Resonant Interaction of Laser Radiation with Matter held in the mid-1960s. This year, the event focused on two fields of research: laser micro- and nanotechnologies and interactions of laser radiation with various substances. A total of 158 researchers from 11 countries, including China, USA, Germany, France, Israel, and Argentina, industry representatives, as well as 70 students presented their talks at the symposium.

“Science cannot develop without exchanging results. If as a researcher you do not share your findings with the world, you will not contribute to society. However, if we exchange information only within the country, we will be limiting ourselves, so it is crucial to preserve the connection to the global community,” says Vadim Veiko, the head of the symposium and a professor at the Faculty of Nanoelectronics.

Apart from visiting these sections, students and young scientists had the opportunity to showcase their research and receive feedback from leading specialists in respective fields during special events organized during the symposium, such as the School for Young Scientists, Engineers, and Students, as well as international scientific schools “Laser-optical methods in Art & Science” and “Biomedical laser technologies.”

In order to improve laser technologies, researchers around the world are running experiments and developing more efficient and promising materials for interacting with a laser beam. For instance, Vitaly Konov, a member of the Russian Academy of Sciences (RAS) and a professor at the Prokhorov General Physics Institute of the RAS, explained that a synthesized diamond alloyed with nitrogen is a more promising material for efficient terahertz antennas with a wide aperture, meaning that they have a wide efficient electromagnetic radiation reception area. Based on the results of this research, the scientists have developed a 3D diamond high-energy particles detector.

ITMO’s own researchers have also presented their findings. For instance, Mikhail Moskvitin, a researcher at the Faculty of Nanoelectronics, showcased a method for control, creation, and predetermination of topological characteristics of regular surfaces based on laser-induced surface periodic structures. This new method will facilitate standardization of surfaces and their further application in engineering, photonics, and healthcare.

In his experiments, Quang Dung Nguyen, a student from the same faculty, has discovered that when three tracks are recorded via laser thermochemical recording, the width of the middle one decreases depending on the distance to the two other tracks. The scientist studied the reasons for this phenomenon, the so-called lateral effect, and suggested a mathematical model for predicting the recording parameters to ensure the needed width of tracks in the future.

Laser technologies have long been in application in various fields and now even more opportunities are opening for such systems. For instance, apart from materials processing and design of optoelectronic systems or flexible electronics, they can be used in biomedicine. The research group headed by Valery Tuchkov, a corresponding member of the Russian Academy of Sciences and head of the Optics and Biophotonics Department at Saratov State University, uses laser technologies for optical screening of biological tissues. In order to perform the procedure, a biocompatible immersion solution is put into the human tissue. This solution can make the tissue transparent in a wide spectral range (from deep UV to terahertz radiation), thus ensuring a greater depth and clarity of the acquired image. There are several potential applications for this method: diagnostics of such illnesses as diabetes and cancer, drug delivery or implant monitoring, and phototherapy, a treatment method when patients are subjected to natural or artificial light. The latter is used to increase antibacterial activity of antimicrobial drugs during cancer treatment.

In his work, Dr. Emmanuel Stratakis, the Research Director at the Institute of Electronic structure and Laser (IESL) of the Foundation for Research and Technology-Hellas (FORTH), combines laser technologies and biomimetics. For instance, Dr. Stratakis has imitated some natural surfaces, such as wings of butterflies and skins of sharks and lizards in micro- and nanomaterials. This approach makes it possible to develop composite materials with unique properties, such as antireflection, superhydrophobicity, or superhydrophilicity, which can be used in glasses and goggles.

In his talk, Prof. Boris Chichkov from Leibniz University Hannover explained the mechanisms behind creating 3D patterns of live cells and microorganisms using laser bioprinting based on the principles of direct laser-induced transfer. A group of researchers has managed to print various kinds of cells, including primary and stem ones, as well as teeth, bones, and cartilages. The acquired results will be potentially used in human microbiome studies, organ printing, and analyzing drug and antibiotics efficiency, as well as the effects of various skincare products without resorting to animal testing.

However, there is still the problem of cells’ livelihood inside the cell carcass during bioprinting. In order to solve it, Artem Antoshin, a junior researcher at the Regenerative Medicine Institute of Sechenov University, together with his colleagues have suggested photobiomodulation. It’s a noninvasive and non-thermal method that uses red light and near-infrared spectrum to stimulate cell mitochondrial activity.

The future of laser technology

We had the opportunity to ask the researchers about their current experiments and the prospects of the field.

director of the Institute of Physics at Herzen University

At the conference, I was mostly interested in photonics of alternating-phase materials, which in ultrashort periods of time can change their state from amorphous to crystalline. Each of these states has its own optical and electrical properties. Such materials are widely used in electronic and optical storage devices, such as CD, DVD, and Blu Ray disks, as well as in 3D XPoint nonvolatile storage. In recent years, there has been a growing interest in using these materials for reconfigurable nanophotonics devices. In contrast to ordinary optical materials, where the created structures have set properties, in reconfigurable devices based on alternating-phase materials these properties can be changed, which opens a wealth of new opportunities. With my research group, we work with first-principles calculations of properties of such materials and are about to start an experimental study. We are also planning to collaborate on such research with our colleagues from ITMO University.

PhD in medicine, an assistant at the Faculty of Dentistry, St. Petersburg State University

At this year’s FLAMN, my research group presented the results of an on-going study, as part of which we came up with a new treatment method for the swelling, pain, and hemorrhage caused by treatments of certain soft tissues in the human mouth. It is more efficient, painless, and quick – with only three to four sessions needed to fully treat the condition. We are planning to use fractional laser radiation on the oral mucous membrane. We have already completed two rounds of testing, on animal subjects and a clinical one, and are already using this method in clinical practice to treat cicatricial tissue and receded gums. We also combine this method with classical laser radiation. This is a very promising field that will help cut down on complications post-treatment and increase the quality of life of our patients.

an associate professor at the Optics and Biophotonics Department, Saratov State University

I am engaged in research of photonic technologies in biomedicine. For instance, in diagnostics using the optical screening method in order to acquire a great amount of various data, we use several modalities, such as terahertz radiation, optical coherence tomography, multiphoton microscopy, Raman spectroscopy, and machine learning methods. The optical screening method allows us to increase the depth of optical screening methods already used in medicine, as well as acquire more information about the structure and properties of objects located in those areas of the human body that are not available for early diagnostics with optical methods. Primarily, we are talking about various skin conditions, however, we do not limit ourselves to them.

All biological tissues contain water, but pathological tissues, including cancer ones, have a higher water percentage. Conveniently, terahertz radiation is greatly absorbed by water, which is why the core of our diagnostics method is the contrast between water ratio in healthy and pathological tissues. In the future, this field will look for new sources of such radiation, as well as ways to make smaller installations, extend databases of pathologies, and automate calculation and processing.