A group of scientists from the Kazan Quantum Center and ITMO University successfully launched the first multinode quantum network in Russia and CIS. For the first time in national history, four nodes of the city's telecommunications infrastructure in different parts of Tatarstan's capital were united by quantum channels. 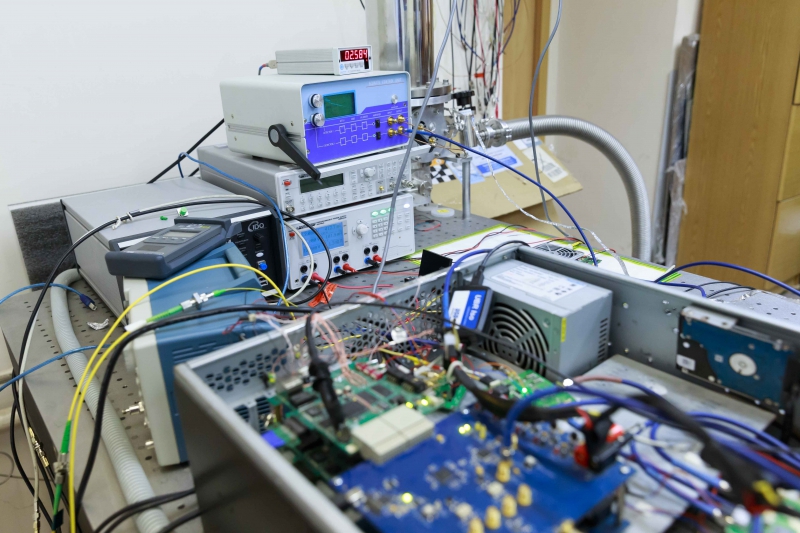 The project was based on Russian inventions only, which are on par with, and, by several indicators, exceed their foreign counterparts.

Quantum communications guarantee absolute invulnerability of communication channels to hacker attacks. As opposed to mathematical encryption algorithms, even the best of which can be "cracked", quantum communication systems make use of the fundamental laws of physics: information is carried by single photons that change at any attempt of signal interception, thus informing the user momentarily of an interception attempt. Quantum communication technologies will become the basis of the future's network security infrastructure, and will be then integrated into the Internet of Things concept, which will cardinally change the common technological landscape. This is why leading scientists from all over the world work on developing quantum technologies. Major multinode quantum networks have already been introduced in the USA (developed by the Defense Advanced Research Projects Agency (DARPA)), Europe (SEQOQC), Japan (the Tokio Network by Toshiba) and China. The pilot segment of the Kazan quantum network that connected two nodes was tested in August 2016; now, the network unites all the four nodes, and a new data transfer protocol that is optimized for the city's infrastructure has been introduced. The network makes use of the city's existing optical fiber communication lines of the Tattelekom communication service provider. Two of the nodes are located in Tattelecom's relay centers on different sides of the Kazanka river, two more in the Kazan Quantum Center's facilities. The distance between nodes is about 10 km, while the length of the optical cable during the trial runs was up to 30-40 km.

During the first run, the network transferred control commands and demonstration files; also, the "quantum telephone" - transferring quantum cryptography protected audio files - has been tested. The network is based on a quantum communication technology that uses side frequencies, which has a high speed of transferring quantum bits (up to 10 times higher than alternative projects developed in Russia and other countries). During the tests, the speed of quantum sequence generation in particular parts of the network exceeded 100 kpbs.

"The project creates a foundation for developing a national quantum communication infrastructure. The new technology will become a basis for distributed protected networks of the new generation: if before, providers only offered data transfer, now they will also be able to offer their clients information protection services. This will be achieved by scaling our solutions and forming standards in the field of quantum communication, explains Artur Gleim, head of ITMO's Quantum Informatics Lab of International Institute “Photonics and Optical Information Technology" and Kazan Quantum Center's Laboratory of Quantum Cryptography. Further development of the Kazan network will continue in two directions: firstly, that would be improving the quantum channel's properties (speed, range, etc.), secondly, that would be introducing the system to different information services - from data processing centers and systems that provide for the uninterrupted performance of different municipal facilities to mobile communications and messengers." "Our collaboration with ITMO University is most productive, since it's based on common research interests, comments Sergei Moiseev, head of the Kazan Quantum Center. The initial system was created in St. Petersburg, and we help improve it. Our laboratory has been working on quantum memory for fifteen years already, yet we needed to find a practical application for our inventions, and our colleagues from ITMO University needed quantum memory for long-distance communications. We've been collaborating for two years already. In future, we plan to create a repeater (a signal amplifier that will save the quantum condition and transfer it through the channel, which will allow to increase the transmission range) and certify the network. Every day, we conduct technical tests, improve the routing and stabilize the equipment".

Albert Yakovlev, Tattelecom’s Director of Informatization and New Technologies, is sure that quantum cryptology technologies will allow financial structures, governmental organizations and intelligence agencies (if certified) that use dedicated optical fiber lines transfer information with a zero probability of unsanctioned access.

"There are similar inventions created abroad, he adds, yet Russian consumers will be at advantage as they will be offered an affordable product and technical support directly from the developers. The use of optical communication channels is expected to greatly increase in the future, which opens wide possibilities to introducing the technology. Using quantum cryptography can greatly improve information security on a national level".

Previously, only quantum communication lines that connect two nodes have been launched on CIS territory. The first was created in ITMO University in 2014: its scientists connected two facilities via an existing underground optical fiber cable. In June 2016, Russian Quantum Center launched another quantum communication line - between two buildings of Gazprombank in Moscow, and in September 2016 Moscow State University connected two nodes in towns of the Moscow Region. This time in Kazan, the developers succeeded in uniting several subscribers into one network, which is a great step forward - a multinode system implies more complex solutions than a plain node-to-node system.

The Kazan Quantum Network is being created as part of SafeNet of the National Technology Initiative which focuses on developing new personal network security systems and quantum communications in Russia, with support from the Quantum Consortium.