Young scientists from ITMO University have developed a new type of nanoscale light sources based on halide perovskites. The nanosources are subwavelength nanoparticles which serve both as emitters and nanoantennas capable of amplifying light emission inherently without need for additional devices. Moreover, perovskites enable tuning of emission spectrum throughout a visible range by varying the composition of the material. This makes the new nanoparticles a promising platform for creating compact optoelectronic devices such as optical chips, light-emitting diodes, or sensors. The results were published in Nano Letters, one of the leading journals on nanophotonics. 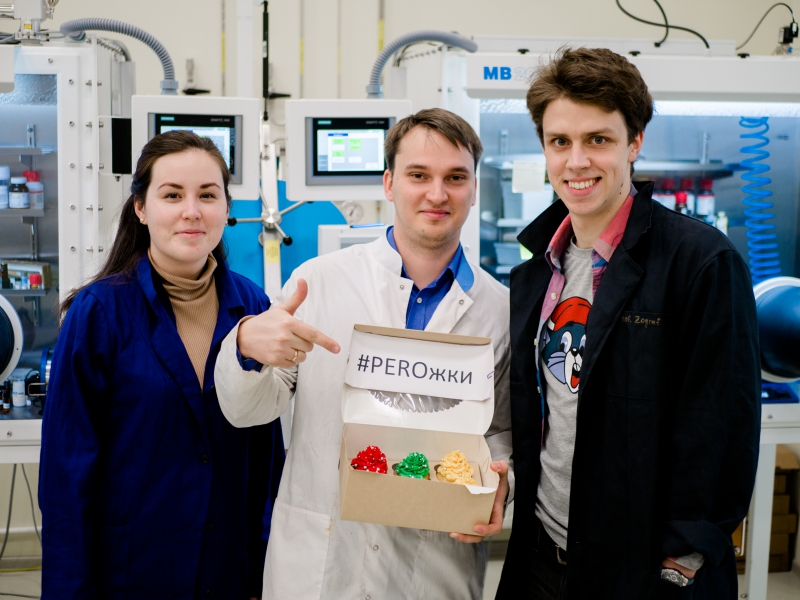 Nanoscale light sources and nanoantennas have already found a wide range of applications in several areas, such as ultra-compact pixels, optical detection, or telecommunications. However, the fabrication of nanostructure-based devices is rather complicated due to the limited luminescence efficiency of the typical materials used, as well as non-directional and relatively weak light emission of single quantum dots or molecules. An even more challenging task is placing a nanoscale light source precisely near a nanoantenna.

A research group from ITMO University has managed to combine a nanoantenna and a light source in a single nanoparticle. It can generate, enhance and route emission via excited resonant modes coupled with excitons.

"We used hybrid perovskite as a material for such nanoantennas,” says Ekaterina Tiguntseva, the first author of the publication. “The unique features of perovskite let us make nanoantennas from this material. Basically, we synthesized perovskite films and then transferred material particles from the film surface to another substrate by means of pulsed laser ablation technique. Compared to alternatives, our method is relatively simple and cost-effective."

While studying the obtained perovskite nanoparticles, the scientists discovered that their emission can be enhanced if its spectrum matches with the Mie-resonant mode.

"Such resonances were named after the renowned German scientist Gustav Mie,” explains George Zograf, engineer at ITMO’s Laboratory of Hybrid Nanophotonics and Optoelectronics. “He developed a general theory describing how light interacts with sphere-like objects smaller than the wavelength. Today, scientists are particularly interested in Mie-resonances related to dielectric and semiconductor nanoparticles. Perovskites used in our work are semiconductors with luminescence efficiency much higher than that of many other materials. Our study shows that combination of excitons with Mie-resonance in perovskite nanoparticles makes them efficient light sources at room temperature."

In addition, the radiation spectrum of the nanoparticles can be changed by varying the anions in the material’s composition.

“The structure of the material remains the same; we simply use another component to synthesize perovskite films. Therefore, it is not necessary to adjust the method each time. It remains the same, yet the emission color of our nanoparticles changes," says Ekaterina.

"As far as we know, no one has been able to produce subwavelength perovskite nanoantennas with an adjustable emission spectrum before,” - adds George - “When we submitted this paper, we had promised our colleagues that we would bake some pastry reflecting the concept of our work if the article gets accepted. Now that it has been published, we celebrated the occasion with some colorful cupcakes we have dubbed “PEROzhki” – in honor of perovskites."

The scientists are currently continuing their research of light-emitting perovskite nanoantennas by using various components for their synthesis. They are also developing new designs of perovskite nanostructures which may improve ultra-compact optical and transmission devices.

The Laboratory of Hybrid Nanophotonics and Optoelectronics is part of the International Research Center for Nanophotonics and Metamaterials at the School of Photonics. It was created at ITMO University within the framework of the 5-100 Russian Academic Excellence Project. The School solves global challenges in such areas as telecommunications, manufacturing, energy, medicine, and ecology. One of the key challenges in this respect is the development of integration mechanisms for photonics and electronics so as to create a platform for manufacturing cheap and efficient chip systems for communications, various sensors, medicine and energy.

Scientists from the International Research Center of Nanophotonics and Metamaterials work on the development of a new platform of optical signal sources based on hybrid perovskite nanoantennas for further integration into compact, fully optical chips.