How can we make a laser that will work effectively on low pump energy, be quite small and will allow dynamically changing the output radiation spectrum?  Vladimir Borisov, a  PhD  student at ITMO’s Department of Photonics and Optical Information Technologies, has won a grant of the Russian Foundation for Basic Research for creating just such a laser. One of the advantages of the new device is that the resonator is placed in the active laser medium, which simplifies the design while changing the resonator itself; it is created by  holographic  grating and uses quantum dots as photon sources. 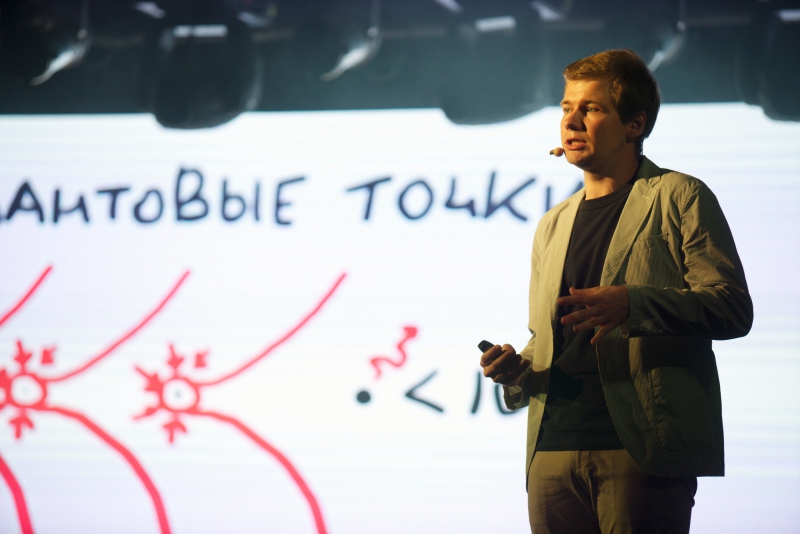 A laser is a beam of light with identical photons that is formed as a result of stimulated emission. How does it work? Let’s envision a material with a large number of atoms with their electrons at certain energy levels. When a photon cuts it, it makes the electrons transition to other energy levels. This does not last long and the electrons tend to return to their original places, and when they do so they emit a photon. This is called spontaneous emission. It is incoherent, meaning that photons have different wavelengths, different directions, and other characteristics. An atom has to be influenced by electromagnetic radiation, e.g. light, to get to this excited state and force its electrons’ transition. This process is called pumping.

Some atoms can stay excited for a long time, which creates an opportunity for another photon to hit it. In this case, when the electron returns to its energy level the atom will emit two identical photons (with the same wavelength and other characteristics). This is called forced radiation. These two photons can crush into another excited atom, which will result in four identical photons. They will crash into new atoms producing eight photons and so on. This constant increase of identical photons forms the laser beam or coherent radiation. Not all the photons produced in the active laser medium can go to the laser beam. Some of them have to always remain in the medium. A system of resonators that reflect photons has been invented to ensure that some photons stay in and continue to cause stimulated emission. One of the mirrors transmits 50% of light and forms the beam.

Reducing the number of spontaneous emissions

Vladimir Borisov stressed that forced radiation is a probabilistic process. If the pumping is good and there are many photons in the active medium, the laser will work well. The pumping, however, might be weak. Another problem is that many atoms can radiate spontaneously, produce incoherent photons into the laser beam. Because of these photons, the probability of spontaneous emission or forced radiation increases, but in a different spectrum, which can transform directed coherent light (laser) into ordinary radiation with different wavelengths. Thus, we have to solve several problems. Our first task is reducing the number of probabilities of obtaining photos with different characteristics.

“In other words, we need the “correct” identical photons to stay in the active medium and the others to fly away from it. We can do this by creating the “lines” with different refraction indexes in the active medium. The distance between them will equal half the needed photon wavelength. Then the desired photons will be reflected within the boundaries of the two “lines” forming the standing wave without affecting the coherence of the laser radiation. The resonators (the “lines”) are located inside the active medium, simplifying the laser design. To create these “lines” we will create holograms in the active medium”, explains Vladimir Borisov.

Two lasers generating identical beams that are coming towards each other will be needed to create this holographic grating. The beams have the same parameters thus creating a space of light and dark lines at their intersection. A special material that changes its properties under the influence of light is placed into this intersection, which leaves it with dark and light lines with different refraction indexes.

But how can the photons “trapped” in the “bright” areas of holographic grating be able to leave them to form coherent radiation or a laser beam? We would need to create a hologram with specific parameters for that. The key is that photons passing through the “dark” parts of the grating are also probabilistic.

“We can imagine this reflection between the “light” and “dark” lines both as wave reflection and photon reflection. It is actually something in between. In case of a wave, only half of it is reflected and the other half goes through. In case of photons, every photon has a chance of either reflecting or passing through. Eventually, a part of the wave or some photons will reach the edges of the hologram and come out of it in,” continues Vladimir Borisov.

The second problem with lasers that scientists are working on is how to make the holographic medium emit light. Quantum dots are a solution. These are very small objects that can absorb and emit photons. Placed in the active laser medium, they will emit photons with weak pumping. However, it is not that simple; the dots will be distributed evenly throughout the active medium, even in the “dark” lines of the holographic grating, where spontaneous radiations will appear. As was already mentioned, those reduce the effectiveness of coherent radiation.

Vladimir Borisov will solve several complicated problems while creating a new type of laser during his grant work.

Ultimately, the work will result into creation of physical models that describe the hologram formation in different composites depending on the composite itself, the quantum dot concentration and the hologram recording conditions. The efficiency and feasibility of the laser described above will also be tested as the scientists will check whether it is possible to obtain coherent radiation with the help of the holograms.

“Low energy photon radiators will allow exposing the investigated medium to less influence and reducing the amount of energy required for pumping. For example, you need lasers to study biological tissues, but powerful radiation will heat the tissue thus changing its properties and making the study inaccurate. The radiation can be cut down with a filter but then we will end up simply losing 99% of the radiation. Why shall we do it, when we can make a less powerful laser? Moreover, small “identical” photon radiators can be easily integrated into quantum optical circuits. When the laser has separate resonators, it is a separate design, with its technical difficulties. Our active medium with an in-built resonator can work as an independent element and is very small”, concludes Vladimir Borisov.

Scientists from ITMO University will implement this project together with a group from the University College Dublin under the guidance of Professor John T. Sheridan. Together they will develop a multicomponent model describing the process of photoinduced mass transfer in a photopolymerized composite with quantum dots during holographic recording. Professor Sheridan and Vladimir Borisov have created a model that describes the processes taking place in the active laser medium with quantum dots, when holograms are recorded in them. The scientists are ready for theoretical and experimental work.