ITMO scientists have been the first to describe new features of dielectric nanoparticles’ optical response using an improved method for electromagnetic field analysis that can take into account more complex configurations of bias currents inside the objects. These effects allow to better understand the processes in nanoparticles and adjust their behavior for more efficient light control in devices such as nanolasers or sensors. The results have been published in Laser and Photonics Reviews and selected as materials for the issue cover. 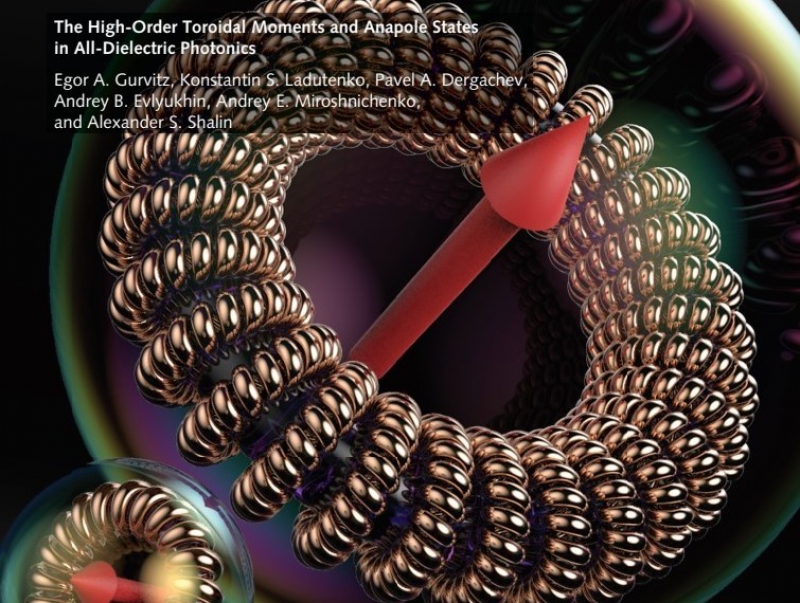 In recent years, dielectric nanoparticles have been actively used to control light on nanoscale. They accomplish this better than previously proposed plasmon particles, whilst also allowing to avoid energy loss and obtain interesting physical effects. Therefore, dielectric particles can be used to, as an example, create nanolasers, nanoantennas, sensors or information transfer devices. That is why scientists are working to study their behavior in as little detail as possible to pave the way for their effective applications in the industry and beyond.

As a result of recent research, physicists from ITMO University have been the first to successfully describe new features of the optical response of dielectric particles. They managed to demonstrate that there are complex configurations of displacement currents inside the particle, which lead to toroidal moments of higher orders. What is more, the researchers have shown that the complex interaction of currents in a particle can switch it into a special non-radiative or anapole state. These results help better understand the electromagnetic processes in nanoparticles and learn how to adjust their optical response to create more efficient devices.

“Imagine that you have a mechanism which you can adjust to different modes of operation using different gears. A multipole acts as a similar gear for a particle. In the same was as complex mechanisms, particles of complex shape have the potential to perform a larger variety of tasks. But they also have more gears, and due to lack of information about them, it had been previously impossible to control the work of such particles. Our results solve this problem and provide significantly more possibilities for adjusting the optical properties of particles. This is a new step in dielectric photonics development, which will enable us to create more advanced devices,” explains Alexander Shalin, the head of ITMO University’s International Scientific Laboratory “Nano-Optomechanics”.

According to the scientists, the study was prompted by the fact that classical approaches to describing particles started to fail in gasping their complexity. Due to this, many research groups began searching for new theoretical models, and ITMO specialists’ work was conducted in the atmosphere of constant competition. Periodically, some new results appeared that needed to be taken into account, and the almost completed work had to be reviewed and expanded several times. However, as a result, the article appeared on the cover of the new Laser and Photonics Reviews journal issue and received special notice of the journal’s editorial staff.

“This work was one of the first large-scale studies in which I did most of the work myself. This applies even to the picture for the article which appeared on the journal’s cover. The study is theoretical, and these are less likely to stand out in front of articles with a strong experimental focus. So getting on the cover for me is a great achievement. It helps attract the attention of the community and makes it clear that we have done a good job and deserved the recognition. I’m glad that ITMO University provides an opportunity for young scientists to publish at such a high level. And the well-coordinated team of the laboratory and the faculty gives all the support needed for making this opportunity a success,” notes Egor Gurvitz, a PhD student at ITMO University’s Faculty of Physics and Engineering.