ITMO University’s International Research Center for Nanophotonics and Metamaterials has recently hosted the Summer School on Topological Photonics. In the course of five days, young researchers – Bachelor’s, Master’s and PhD students – listened to lectures by leading specialists from Russia, Europe, the US, and Korea. The event brought together over 60 participants from many Russian cities, as well as Germany, France, Italy, Spain, the UK, Mexico, Turkey, and other countries. The school was followed by the 4th International Conference on Metamaterials and Nanophotonics METANANO 2019. 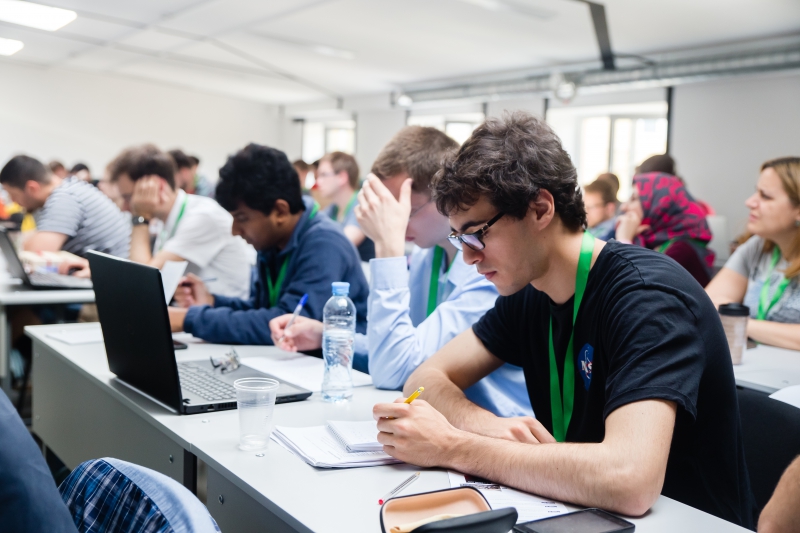 Organized by the International Research Center for Nanophotonics and Metamaterials of ITMO University for the fourth time, the summer school is aimed at Master’s and PhD students, engineers and postdoctoral researchers. Compared to last year’s schools, which were dedicated to a wide range of topics, this school focused solely on topological photonics, a rapidly emerging field of research in which geometrical and topological ideas are applied to design and control the behavior of light.

“It took us quite a long time to come up with the topic for this year’s Summer School. First, we looked at what competencies we had in our Center. Second, we attempted to understand what topics are the most relevant today,” comments Andrei Bogdanov, the General Chairman of the Summer School, a staff of the International Research Center for Nanophotonics and Metamaterials. “Topological photonics is now one of the most topical research fields. What’s so interesting about it? Today we use fiber optics lines for fast and cheap internet. It even allows transmitting signals across the ocean. However, it’s not that trouble-free. One of the existing problems with using fiber optics cables is that if you occasionally band the cable, the signal will be reflected and will go in a different direction. Topological photonics, in its turn, allows for the creation of such waveguide systems that only produce waves propagating in one direction. Thus, research in this area opens up a lot of prospects, in particular, associated with creating compact integrated optical circuits.”

This year’s Summer School was supported by ITMO University’s Optical Student Chapter and the Optical Society (OSA), an international professional community of researchers, engineers, lecturers, students and businesspeople working in the field of optics and photonics.

“This is our first time working on a joint project with the Research Center for Nanophotonics and Metamaterials, but I can already say that this experience is a good one. The School was very well-organized, on par with the best European professional summer schools. I really hope to push this collaboration further in the future,” says Mikhail Khodzitsky, a scientific adviser at the Optical Student Chapter at ITMO University.

As for the format of the Summer School, it was, in fact, a single course comprised of a series of interconnected lectures, shares Andrei Bogdanov. The lecturers use the principle of scaffolding starting with simpler things and gradually moving to more complex ones. All lectures are accompanied by practical tasks, as well as separate tasks for individual study. The School ends with the discussion of the latest advances and problems in the field and a written exam.

The program of this year’s summer school also included a competition for the best poster project, and five winners have already been announced. First place went to Henning Tristan Harder from the Julius Maximilian University of Würzburg.

My research group specializes in polariton topological insulators (a type of topological material with non-trivial symmetry-protected topological order that behaves as an insulator in its interior but whose surface contains conducting states, meaning that electrons can only move along the surface of the material – Ed.). We study the relationship between light and matter in nanostructures and attempt to use the topological aspect for controlling the propagation of light. We’ve recently managed to develop the first exciton-polariton topological insulator (the article was published in the journal Nature – Ed.).

This is my first time visiting ITMO University. What I like the best is that the topic of the Summer School is exactly what I’m working on right now. I really like doing experiments and see this school as an opportunity to familiarize myself with the latest theoretical research in my area of study, better understand the material that we discuss at the laboratory, as well as develop a better understanding of how experiments are conducted. Especially useful were the lectures, as they were all given by prominent researchers in the field. The thing is that it’s not always easy to fully grasp the material when you just read an article. That’s why it’s important to look for opportunities to talk to leading experts face-to-face.

The research group I was part of focuses on silicon photonics. More specifically, we’re attempting to create a nanoscale light source that could be integrated into microchips. As for practical applications of our research, we hope it will speed up the work of computers and data centers due to the fact that we will exploit photons instead of electrons. We also study quantum dots and microresonators, as well as try to enhance the luminescence and control it at the nanoscale.

Thanks to my active collaboration with ITMO University researchers, I’ve long known about this Summer School. I visit ITMO quite a lot, and this is my second time participating in this Summer School. In addition to that, this year, I also plan to take part in the METANANO conference.

For me, this summer school is an opportunity to broaden my horizons and acquire new knowledge in the field of topological photonics. Among the things I found the most useful was the lecture by Maxim Gorlach, in which he talked about basic concepts in topological photonics

I work as a researcher in the field of photonics and metamaterials at the Middle East Technical University. Among other things, we develop equipment for the electric power industry and do research into alternative sources of energy. In my opinion, in the future, one of the applications of topological photonics may be in solar energetics.

I am a PhD student at SISSA and work as part of a group that focuses on the theory of condensed state. As of now, I am also working in the field of topological photonics, namely, topological lasers. This is a new class of lasers that have the potential to make lasers’ energy usage more effective. This new technology can also allow you to create lasers of any form you’d like. This means that you can use lasers in smartphones, in any kind of new devices, and another prospect for its application is in increasing the accuracy of lasers that are used, for example, in space navigation and other fields.

I started to pursue this field only a couple of years ago. That’s why I decided to participate in this summer school: I want to learn more about this new and actively developing branch of science. The main benefit of participation in this summer school is that it gives you an opportunity to share knowledge and experiences with other specialists. Because it is in the process of discussion that new ideas emerge, and you get the chance to look at your own work from a new angle and find new prospects for developing your research.