This summer, ITMO University held the Camp in Optical System Design for the fifth consecutive year. It welcomed participants from Turkey, Germany and Belarus, as well as from other Russian universities. We caught up with Sahin Umsu from Turkey and Natalia Erhova from Moscow, Russia to learn about their experience. 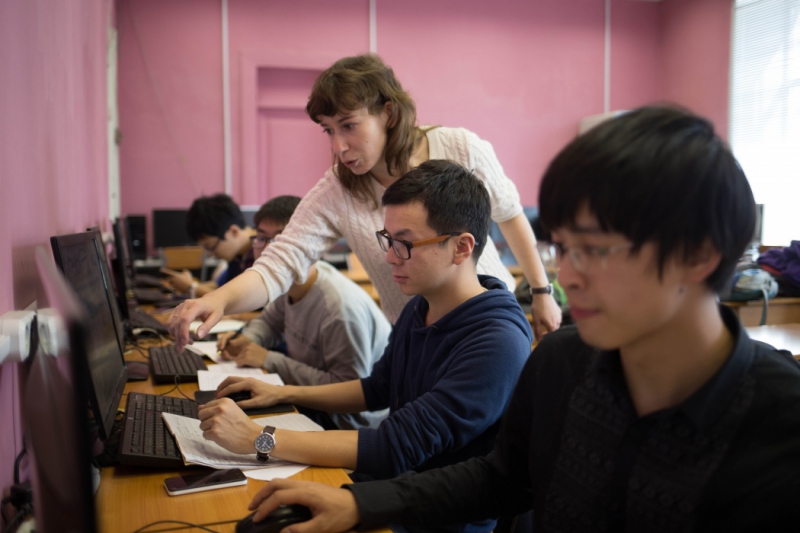 Sahin Umsu, who is originally from Turkey, currently lives in Sweden. He works in a defense company and is responsible for testing optical remote systems for technical issues. He has a Master’s degree in Physics Engineering and came to St. Petersburg with the sole purpose of improving his qualifications and competence.

Natalia Erhova comes from Moscow and works there at the Russian Academy of Sciences in the field of X-ray astronomy.  She has a Bachelor's degree in Optical Design, and came to St. Petersburg because her supervisors offered her to take part in the Summer Camp to update her knowledge for their future projects.

Both are participating in the Camp in Optical System Design, which includes both theoretical classes and hands-on experience. The students work in laboratories and on an individual research project. Furthermore, the school consists of a variety of topics which Sahin deems necessary for his expertise.

Natalia and Sahin arrived in St. Petersburg with little to no expectations but feeling motivated nevertheless. But they learned more than they anticipated, taking with them a set of skills that will advance them in their respective fields.

Sahin always dreamed of working in the field of optical design. Therefore, two years ago he started looking for job opportunities in optical system design but was unsuccessful in his search and instead started looking for ways to boost his qualifications. He started looking for different programs around the world because universities in Turkey were unable to offer him similar programs. Sahin finally chose ITMO University’s options because of its cost and time efficiency.

Another reason for coming to Russia and choosing a Russian university is Sahin’s personal experience working with a Russian engineering professor during his studies. He was thoroughly impressed by his competence, and knowledge and approach to the field that it compelled him to come to study here.

Natalia did not seem to have any expectations at first but after she received the list of topics and materials to be covered during the School, she arrived here with a strong resolve to learn. She felt even more motivated when she noticed that her own goals and the school’s topics were aligned similarly.

Before coming here, Natalia was struggling with Optic Studio 2014, and even after a while was able to master only the basic functions. During her studies she had a short course which taught her how to use Zemax Optics Studio program, but it was an old version of it. She recalls that she used to do all of her calculations by hand on paper while using a calculator. She describes that process as tedious, slow and lacking clarity. After this school she learned how to operate the software and use all of their functions to their fullest potential. Natalia believes that this will significantly improve the quality of her work.

Both have enjoyed their experience in St. Petersburg.  Natalia has been here several times before and already knew her way around the city so she used this opportunity to visit all of her favourite museums and marveled at the architecture. She also visited ITMO’s Optics Museum which left an impression on her with its colorful exhibitions and descriptions of works.

For Sahin this is his third time in St. Petersburg and second time participating in ITMO’s Summer School. He considers St. Petersburg to be a comfortable city to live in despite the amount of tourists. Upon arriving here for the first time, he felt unsafe in an unfamiliar environment but nowadays he moves around the city confidently like a local. He didn’t experience any difficulties familiarizing himself with the Russian culture since he was well acquainted with it due to having Russians in his close circle of friends.

Sahin keeps choosing ITMO University because he is confident that he will receive quality education from experts and learn how to tackle different issues.

“I have been actively applying the skills that I have learned here to my own work. I am able to point out the problem and the reason behind it. I have also learned to efficiently solve the problem through different means. Thanks to the schools I have participated in, I've been able to offer a lot more  skills to my current workplace, and above all I have learned to design systems which has brought me one step closer to my goal,” says Sahin.

Sahin will continue to work hard and study Optical System Design to achieve his goal of building his career in this field.

“I believe in myself, and in my abilities. I have a creative mind and a passion for designing. I like working with hardwires, and I have experience in mass production and engineering processes which will come in handy in my dream job,” explains Sahin.

Natalia says that if she has a chance to take part in one of ITMO’s summer camps again, she would do so gladly.