Every now and then, scientists need to control the process of mixing liquids in vessels so small that the thinnest needle or even a hair won’t fit in there. At the same time, controlling the diffusion speed of molecules in the so-called microreactors is extremely important for the purposes of designing new drugs, conducting biological experiments and even diagnosing diseases fast enough. Scientists from ITMO University and their colleagues from the Czech Academy of Sciences proposed to solve this problem by using the energy of light. Their research has been published in Advanced Science. 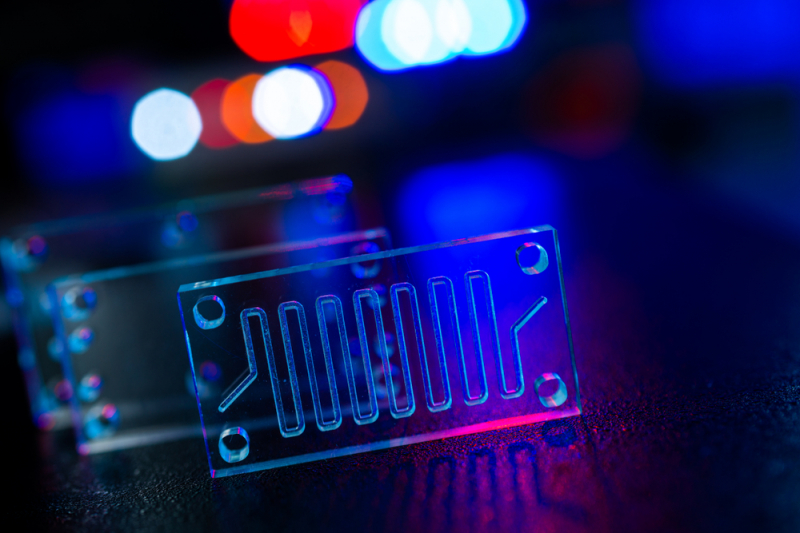 Nowadays, biologists, chemists and pharmacists make a wide use of microreactors, often integrated in miniaturized setups which are designed to perform several steps in the chemical synthesis of a specific product, the so-called lab-on-a-chip platforms . These minuscule containers with small grooves on their inside can range from several cubic millimeters to a few cubic centimeters in size - no larger than a matchbox.  Nevertheless, they make possible  to conduct blood analyses, mix microscopic doses of substances for the purpose of creating highly efficient drugs, and conduct experiments on cells.

Still, there’s one issue associated with their operation: scientists have little to no control over the mixing speed, or, scientifically speaking, the diffusion of liquids and reagents inside such laboratories-on-a-chip.

“Because the size of the area inside of a microreactor is so small, you can’t mix liquids using some glass stick. The liquids mix together naturally, just as coffee and milk do in your cup. Then again, we need to control the diffusion speed, and not just the overall diffusion speed inside a container but the speed at every specific place, so that we can make the process go faster in one spot and slower in the other,” explains Aleksandr Shalin, a professor at ITMO’s Department of Physics.

Scientists from ITMO University and their colleagues from the Czech Academy of Sciences proposed a method that can help solve this problem: they decided to take advantage of the so-called radiation pressure.

Back at the end of the 19th century, British scientist James Clerk Maxwell made the assumption that light can exert pressure on physical objects. Before long, Russian scientist Pyotr Lebedev proved it possible. Still, the force of such interaction is very small, and at that time, no one found a use for it. Nowadays, there’s a whole field of science called optomechanics that focuses on this phenomenon, and in 2018, professor Arthur Ashkin got a Nobel Prize for his research in this field. Light is being used to capture living cells and control the trajectories of particles at the nanoscale. Now it turns out that the same forces can be used for mixing liquids.

Based on the latest optomechanics discoveries, scientists from St. Petersburg developed a nanoantenna consisting of a miniscule silicon cube of about 200 nanometers in size. This device, invisible to the human eye, can efficiently manipulate light in a very particular way.

“Our nanoantenna turns circularly polarized light into an optical vortex,” explains Aleksandr Shalin, “the energy of light spirals around it. This way, rigorously speaking, we convert the spin angular momentum of light into orbital angular momentum.”

Then again, turning a stream of light into a vortex is not enough: in order to make the molecules or liquids move faster, we need something more substantial than photons stirred by a vortex. For this reason, the researchers proposed introducing gold nanoparticles into the liquid. The particles captured by an optical vortex begin spinning around the silicon cube, acting as a stirring “spoon” for mixing reagents. What’s more, the size of such a system is so small that it can amplify the diffusion at one corner of a microreactor by hundreds of times while practically not affecting what happens in the other.

It’s quite natural to ask why scientists proposed to use gold particles for mixing liquids and not some cheaper material. Well, their choice has solid reasons behind it.

“Gold is a chemically inert material which doesn’t react much”, says Adria Сanos Valero, one of the main authors of the research. “It’s also not toxic. What’s more, it was necessary for us to design it so only spin forces and radiation pressure would affect the nanoparticles in a way that other forces do not cause them to be pulled towards the antenna (the silicon cube that we mentioned), otherwise the particles would just stick to it. This effect is observed for gold particles of a specific size if we illuminate the system with a common green laser. We’ve considered using other metals, but for silver, for instance, such an effect is observed in the UV band only, which is less handy but could be useful to increase the efficiency of some photochemically activated reactions.”

By the way, this method can be applied not only for mixing liquids but also to sort gold nanoparticles: if scientists need to pick gold particles of some specific size, for example 30 nanometers, for an experiment. As of today, the system has been fully computed and there’s a theoretical model designed for it. Conducting experiments will be the next step.