SPIEF 2021: ITMO’s Alexandr Kapitonov on Modern Education and Its Future

Hypothetical trains, ballistic missiles, and social elevators – these were some of the concepts at play during the panel discussion Live and Learn: Educational Trajectories of Young Professionals and Skills of the Future held as part of the St. Petersburg International Economic Forum (SPIEF 2021). Among the participants was Alexandr Kapitonov, dean of ITMO University’s Faculty of Infocommunication Technologies. We wrote down the most intriguing snippets, opinions, and learning points of the meeting. 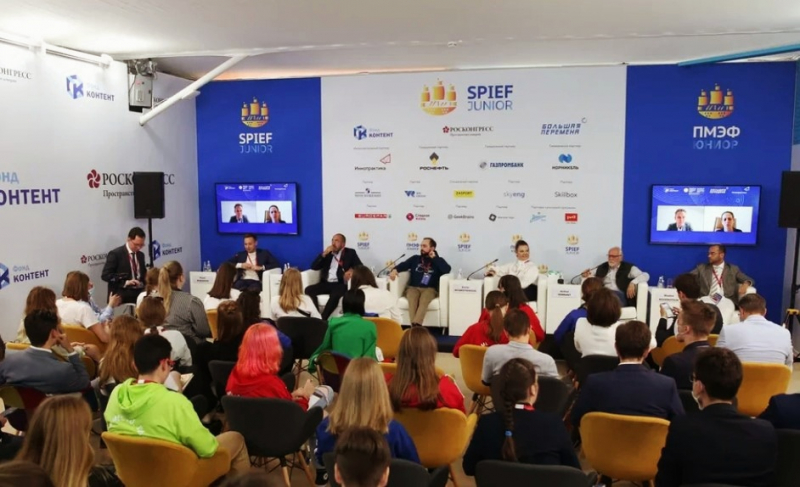 SPIEF 2021: at the panel discussion Live and Learn: Educational Trajectories of Young Professionals and Skills of the Future

Continuous education – a passing trend or a genuine challenge of modern life? Which competencies are crucial for a successful career? Which professions hold the most promise? How do you build your educational trajectory? To discuss these and other topics, Alexandr Kapitonov, dean of ITMO University’s Faculty of Infocommunication Technologies, Andrey Sebrant, director of marketing services at Yandex, Aleksandr Laryanovskiy, a managing partner at Skyeng, Pavel Rubakhin, director for strategic development of digital services at Raiffeisenbank, and other prominent experts gathered for a discussion at SPIEF 2021. The talk was moderated by Alexander Bayzarov, advisor to the director of the Graduate School of Management at St. Petersburg State University. The result was a lively discussion that involved ideas helpful to students and those who are now starting their careers.

Qualities for the present day

One of the first topics of discussion were the personal qualities that are needed to build a successful career today. In addition to the classics, speakers spoke about sociability, structural thinking, and delegation skills. There was also talk of knowing how to manage energy and stress. The “surprise guests” were “a desire to break through walls” and goodwill. Alexandr Kapitonov noted that students at ITMO can accentuate regular classes by joining a variety of student clubs, sports clubs, and other projects in which they can develop their soft skills and try on different roles, including those of team leaders.

“For instance, we have a team at the faculty that’s in charge of organizing hackathons – both in-house and “for export.” They’re first-to-third-year students. These are the kinds of activities that form their leadership skills, critical thinking, and more. My contemporaries also come to ITMO to acquire certain skills and competencies: they know they lack the skills needed to manage teams, communicate with customers, and run projects during times of crisis,” shares Alexandr.

Another topic of discussion was the Unified State Exam (USE). The speakers agreed that it has solved several issues, such as allowing students from various regions of the country to enroll in prestigious universities. In that sense, USE is a social elevator.

“We’ve got students who enroll at the university thanks to high USE scores. It’s a good social elevator, but you need to know how to use it. I’ll also note that USE shows a certain correlation between skills and abilities in certain metrics, but that correlation is non-linear. Kids with high scores sometimes lack any motivation at all. Oftentimes, they burn out and drop out in their first year. Or they face reality and change themselves. And yet there’s a great number of highly-motivated students among those who only scored 230 to 260. We allow them to enroll via a special program and they, too, don’t have to pay tuition,” – says Alexandr Kapitonov.

How not to be a missile

An unexpected twist in the discussion came with the suggestion to abandon educational and professional trajectories altogether. Andrey Sebrant noted that he wouldn’t want to be a ballistic missile that only has a single destination; even a navigation app will offer several routes to choose from. But most importantly, there are things in the world that cannot be predicted. Accordingly, one’s goals and trajectory may change. Although a more consistent approach is indeed more critical in some sciences, such as medicine. And speaking of science, “ITMO trains people of the highest quality,” – notes Andrey Sebrant.

“People often come to ITMO for its brand of higher education that guarantees them well-paying positions at well-known companies. But it often happens that students find something more interesting in the process and change their trajectory,” explains Alexandr Kapitonov.

The discussion eventually led to the low predictability of the future: instead of trying to get onto the last car of an accelerating train, it’s better to get on a hypothetical train that’ll take you into the future.

“Completely new fields will emerge, just as the internet and mobile banking did before. In ten years, everything will be different. But, in my opinion, the most promising fields right now are biotechnologies, robotics, and their intersection through which we’ll be able to expand the brain’s capacities using the latest advances in tech and science,” says Alexandr Kapitonov.

At the end of the talk, the speakers added their messages to the booth wall. “Don’t wait for school to end – live today!” wrote Alexandr Kapitonov.

A full broadcast of the discussion Live and Learn: Educational Trajectories of Young Professionals and Skills of the Future can be found on the official SPIEF website.