ITMO.Superheroes: Alfa Bank Northwest’s Head of IT on Secrets of Success

ITMO University’s Careers Center launches a new season of its ITMO.Superheroes project – a series of open lectures with graduates of ITMO University and well-known experts from all areas of knowledge – from science and social work to business and politics. The new season opened with a meeting with Dmitry Sokiryan, head of Alfa Bank’s Northwest IT Unit. There, Mr. Sokiryan spoke about the importance of having a motto, a team, aiming high and not being afraid of difficulties. ITMO.NEWS provides select quotes. 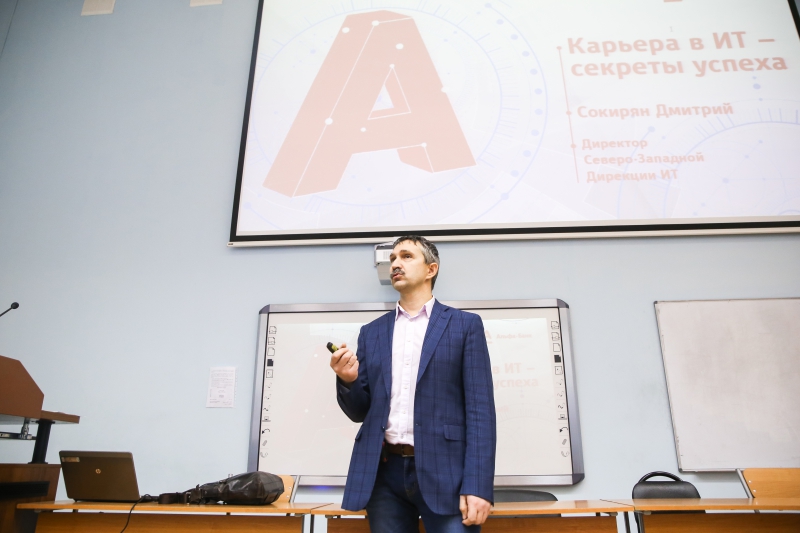 On starting a career and setting one’s principles

Back in the day, I graduated from the Chelyabinsk State Technical University (now South Ural Federal University) as a machine engineer with a specialization in engines and automated equipment. Obviously, these things don’t have much to do with IT. As a student, I had my first programming experience when I had to write a program that would compute a matrix. I failed, which was a great disappointment to me – earlier on, I’d spoken to someone very mature and successful who told me that if I ever want to do well, I need to get good at two things: programming and the English language. Later, during a summer internship, I had the chance to practice programming, and, once I completed it, I was offered to join a developer team working on a complex hardware-software suite for automatized testing of university, school and kindergarten students for my university’s Psychology Department. That was when I discovered my first life principle. Whenever I write or make something, I do it in such a way that any future changes would require minimal fumbling with the code; all parameters must be easily modifiable so that there’s no need to create new software.

On the best part of one’s life

The university years are the best part of your life. You’re free to experiment and try new things, learn what’s for you and what isn’t. It gets more complicated further on. I never would have thought that I’d get into programming, IT and development; I had a completely different major. I was offered a chance and I took it; realized this is what I’m good at and started moving in that direction. I was the only one in my class whose thesis had to do with programming and not with our program subject. My first job after I graduated was at a field office of an oil company. When I got there, it became clear to me that my only job responsibility was to fix computers when they break down. I suggested automatizing some of the processes in the company. There had been some employees before me with similar ideas, but they were quite hard to implement: you had to go see the higher-ups, decide on a budget, outline a project – such difficulties scare people off. I took it upon myself, went to my boss and suggested doing all our materials management on a computer. He agreed and immediately allocated a budget for it, putting me in charge of the project. On importance of looking ahead

I didn’t work there for very long and started to look for other prospects. Banking seemed much more interesting, as it has to do with money and there is usually room for growth there. I went back to Chelyabinsk and thus began my career in IT. Back when I started working there, there was no automatization, payments from the clients were put into the accounting software manually; the software was only installed on a single computer. The payment reports were then taken to a different department where they were once again added to another program in order to send them to the payment processing center. I suggested setting up a local network and writing software to automatize these processes; this way, everything would be compiled and sent automatically. Soon I was appointed head of the department. Alfa Bank and the dream team

I once saw an Alfa Bank advertisement somewhere and the ad was just so lively, it made me want to work there. At that time, one of my superiors had taken a position there and started setting up their Chelyabinsk branch; I, in turn, became the “third in command” at Alfa Bank Chelyabinsk. This was my first experience in regards to forming my own team. When you’re picking your own team members, it ends up being so effective; when everyone’s mentality, temper and other qualities fit your own, you’re capable of making a genuinely great product. We were the first in Chelyabinsk to launch a network solution for servicing customers with plastic cards at the counter. Back then, point-of-sale terminals wouldn’t use Wi-Fi or Ethernet – only phone lines. Thus, servicing a client would take a minute or two, as they’d have to wait for the terminal to make a call, connect, make a transaction, receive a confirmation, etc. All the while, the customers are stuck there, waiting. The Alfa Bank head office didn’t have that issue already, but it was considered to be difficult to implement in the regions. But that didn’t stop us. As a result, clients would only have to wait for 10 to 30 seconds. Seeing as I wasn’t afraid of taking up difficult projects, my superior, who was in charge of the regional branches’ IT departments, suggested I come to St. Petersburg and head the local IT office. It was already clear to me then that I had to keep moving forward, and that was the ideal offer for me. This was a new managerial experience for me, as I was coming in to an already established team, so I would have to convince my new subordinates of my competence and abilities. We’ve implemented some interesting projects there, too. For instance, back then Alfa Bank was rolling out a large-scale project for integrating all of the branches into a centralized banking platform so that the customers would be able to get service in any city. In order to do that, they had to merge the branches’ databases into one unified database and switch the branch offices to centralized software. The St. Petersburg branch, as the most massive one, was left for the very last. So here I am, looking at this plan they sent us and I realize that our own software that the tellers use is automatized enough that we can service our customer base with a minimal number of staff. And switching over to the new system would force us to increase the number of tellers again. I did not approve the plan even though I knew that this was a decision from higher up that was not to be contested. Some representatives from the bank’s head office came in and I suggested they count the expenses and see if they’re justified. I thought I’d get fired, but what happened next is that the developers of the central banking system had come in to help us sort the situation out. We agreed that they’d exclude our system from the general program and adapt it to work with the central system. All that was done in six months, even though nobody had believed it was possible. In 2015, I was appointed head of Alfa Bank’s Northwest IT Unit.

On importance of having a motto

When I was first starting my career, I applied to myself the motto “Do what you must and come what may”. These words are attributed to Marcus Aurelius and a whole other bunch of ancient philosophers. These days, my motto has changed; it is now “Do more than you must and you will succeed”.