The small innovative enterprise “Innocolloid” was created by the staff of ITMO University’s ChemBio Cluster in 2017. In the year and a half of its existence, the company has signed several deals with major representatives of the business community and, beginning from the first quarter of 2019, started paying dividends to its co-founder, ITMO University. Here is more on the company’s operations and how it managed to reach a high level of financial self-sufficiency. 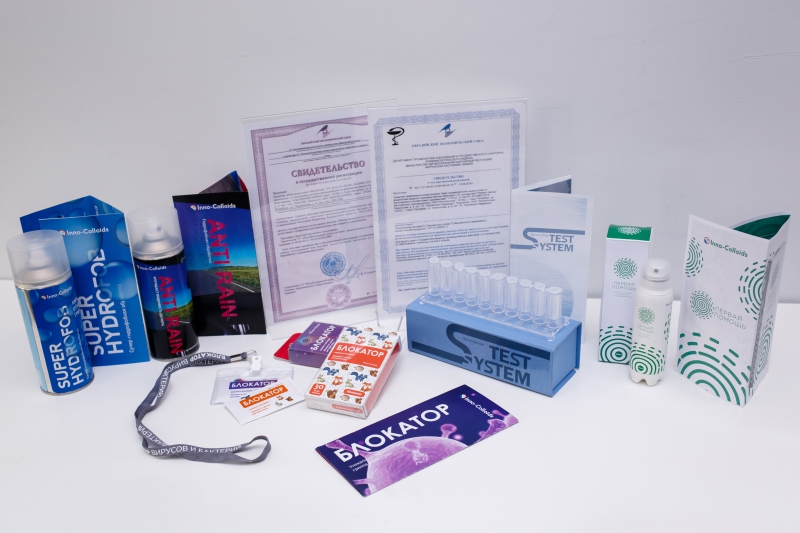 At the end of 2017, a small innovative enterprise “Innocolloid” was created at ITMO University on the basis of its ChemBio Cluster. According to the head of the ChemBio Cluster Alexander Vinogradov, the decision to create the small innovative enterprise was prompted by the desire to make the financial support of the unit independent from grant funding and the university’s own support. Another important factor was the strong interest that the students of the Cluster expressed to be part of practice-oriented research projects aimed at introducing the scientific results achieved at the unit into viable commercial products. The solution was to expand the Cluster’s scientific focus to the industrial level.

“We often hear about the results of scientific research in the field of photonics, robotics, information technologies, chemistry and biology, but not so often about their real commercialization, especially when it comes to the activities of small innovative enterprises created at the university. ITMO’s strategy lays the foundation for the transfer and transformation of knowledge created in the process of the university’s research activities not only further on in the field of science and new educational institutions, but also in the field of new and open innovative methods and approaches that have the potential of being introduced to the market. The purpose of small innovative enterprises is to translate scientific developments into real-world products created with the participation of Master’s students, researchers, and educators who work with these students,” comments Alexander Vinogradov, head of the ChemBio Cluster.

In 2018, the company managed to launch eight new innovative products, two of which are designed for biomedical application. In the first quarter of 2019, the company succeeded in reaching a high level of independent income, which allowed it to effect a 20% payment of dividends to ITMO University, its co-founder at large.

It was the Cluster’s active practice-oriented research that helped Innocolloid secure its financial successes. In addition to the unit’s R&D projects which are directly commissioned by the university within the framework of experimental research, the Cluster works on exclusive commissions from major representatives of the real sector of the economy.

“We consider it our duty, and the duty of any small innovative enterprise created at ITMO, to be mindful of the support provided by the university. The strategy that we are pursuing is a clear demonstration of the mutually beneficial cooperation where we not only teach but also create good, competitive products. In a nutshell, we want to achieve a situation where businesses operating on a market that falls outside of a university’s specific remit would be encouraged to come to it for collaboration. It is, therefore, necessary to initiate a positive transformation of science, enriching it with practical focuses and forming favorable conditions for the university through the payment of dividends,” explains Alexander Vinogradov.

This year, Innocolloid signed a five-year exclusive agreement with one of St. Petersburg companies dealing in sales of the multipurpose anti-virus and bacteria solution “Virus and Bacteria Blocker”. The solution is based on chlorine dioxide, which is known to be the safest and most powerful antibacterial agent we have today. The staff of the Cluster have developed a technology that allows to selectively adsorb chlorine dioxide with further desorption of the active substance into the surrounding environment. In the near future, residents of St. Petersburg will be able to purchase this solution in the city’s supermarkets.

Another development of the Cluster is “First Aid”, a remedy against stretch marks which is based on inorganic polymers. Though products like this one typically use an organic base, inorganic polymers, in addition to offering enhanced tightening effects, also have a conclusive healing effect that is achieved through the stimulation of recovery processes. Based on aluminum oxide matrix, the solution restores the skin without any scarring occurring. What is more, First Aid has an antibacterial, recombinant and anti-inflammatory effect. Together with the company NP Group, the Cluster’s scientists also pursue the project on developing a series of drugs in the field of auto-chemistry. Among their developments is a long-acting product that works to decrease a surface’s contact wetting angle to 4, which allows to achieve a significant, new-level antifogging effect in materials.

Another project conducted by Innocolloid focuses on the development of diagnostic test systems for the determination of bacteriophages both in their active and inactive forms. This solution can be applied in the fermented dairy industry to test the quality of the starter culture in products. In the near future, the first 200 pilot test systems will be manufactured and trialed at the Losevo dairy plant. After that, the development will be able to be launched on the market. You can read more about the company’s developments here.

A number of other products developed by Innocolloid are protected by trade secrets.

The development of the small innovative enterprise “Innocolloid” is conducted by the ChemBio Cluster’s industrial group. Its staff, comprised of the Master’s students specializing in technology brokerage, oversee the creation of products and their introduction to the market. According to Alexander Vinogradov, it is the technology brokerage skills that make it possible to correctly determine the path to the most efficient sales strategy for an invention.

Drawing on the Innocolloid’s resources, the staff and students of the Cluster have the opportunity to carry out the implementation process on real products, which in itself is a rare phenomenon, says Alexander Vinogradov. In two years of their studies, each student of the program “Technology Brokerage in Nanoengineering and Biotechnology” works their way up from immersing themselves into research and development to making their first sale, having successfully mastered several products.

“Created in conjunction with other groups, the industrial group mainly consists of the students of the program “Technology Brokerage in Nanoengineering and Biotechnology”. Any unit, especially one that deals with promising fundamental and practice-oriented research, should have such a group to support their activities. With the number of employees amounting to 30-50 people, an industrial branch that is familiar with the development of all the units and has a good communication with the heads of scientific units can, in due course, reap something for further development or sale. In order to stimulate this process, this year we have launched a competition of internal grants for students that aims to support them in channeling a scientific result into a completed prototype, including with the help of Innocolloid’s resources,” says Alexander Vinogradov.