Hult Prize is an international movement supported by the UN that aims to bring together proactive students from all over the world and encourage their participation in social entrepreneurship. 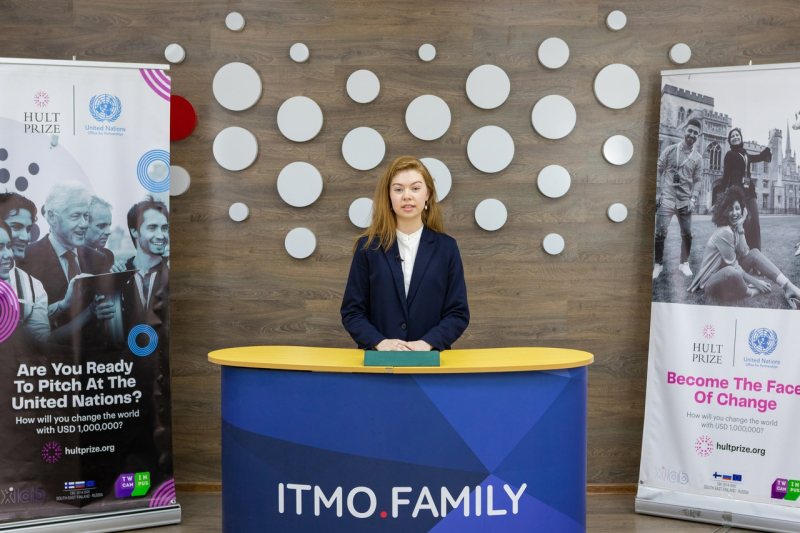 Earlier, ITMO’s Technopark hosted the Hult Prize On Campus, the university stage of the contest which attracted over 200 students from ITMO and other St. Petersburg universities. Successful execution of this first event allowed the organizers to win the chance to host the next stage of the competition, which was held in Russia for the first time. ITMO.NEWS recaps the two days of Impact Summit Saint Petersburg.

Hult Prize Foundation has been organizing international student championships since 2009. In order to win a place in the Hult Prize accelerator, as well as the $1,000,000 dollar grant, participating teams have to come up with an economically efficient solution to a relevant social problem, each year a different one.

This year, the contest’s slogan was Food for Good, so the participants developed innovative solutions in the food industry. 40 teams from Russia, Turkey, India, as well as from the Middle East, Africa, and South America competed for the right to take part in the final round. The teams presented their ideas to the jury that included Samantha Ducey, senior director at Global Impact, Sofia Svanholt, Senior Strategic Account Executive at Microsoft, Ksenia Rodionova, head of the Vkusvill online store, Vasilii Fokin, head of sustainable development at Danone Russia, as well as other Russian and international experts.

Six teams took part in the final of Impact Summit St. Petersburg. Team Oasis from University of The Gambia proposed a mutually beneficial collaboration of farmers and bee-keepers to increase crop yielding capacity. Team Marinada from ENSSMAL (École Nationale Supérieure Des Sciences De La Mer Et De L'aménagement Du Littoral, Algeria) talked about zero waste shellfish production, where the shells are grinded into a powder that can be used as a fertilizer or feed additive. Students of Ez-Zitouna University, Tunis, created eZea, a digital platform for fishermen that makes it possible to perform quality control and sell the product directly to customers. Team Food Development Project from Ankara University, Turkey, came up with a technology to extract protein from unrequited food remains, while team Food Engineers from the Malawi Polytechnic (University of Malawi) introduced a prototype of fruit and vegetable dryer that works on solar energy and natural heat.

Finally, the team from Red Sea University, Sudan was named the winner. They will now join the Hult Prize accelerator and then compete for the $1,000,000 grant in the competition’s final. Within their project, Cassiena, the winning team develops a mass production technology for extracting plant-based protein from the Cassia obtusifolia plant. Kawal, the plant’s fermented leaves, are rich in protein and can be used as a cheap meat substitute, which will help solve the acute problem of hunger in Sudan. Moreover, as it is becoming more common to substitute meat with alternative sources of protein, the technology has the potential to be popular with a wider audience, which opens opportunities for the company’s rapid growth.

Stories of success and failure

Apart from presentation of projects, the Impact Summit included a wide educational program with workshops and lectures by successful entrepreneurs, investors, and top managers in the fields of venture capital investment and FoodTech.

Andrey Zyuzin, a managing partner of the Food for Growth venture foundation, Gregory Kunis, co-founder and managing director of iGooods, and Denis Baranenko, head of the Biotechnology of the Third Millennium research center, discussed the future of the food industry, agrotech, and social entrepreneurship. The discussion was moderated by Igor Kuprienko, head of ITMO’s Project Development Division.

“I think we feel great when we’re a part of different volunteering initiatives and we’ve got a well-developed system of charity foundations,” says Zyuzin. “But social entrepreneurship is still in its early stages. Meanwhile, many people would like to be social entrepreneurs because they see meaning in helping others. But the issue is that right now, not much attention is paid to this subject by neither charity foundations nor government bodies. Yet they are the ones who should support social entrepreneurs – not necessarily with money. They could also provide infrastructure, education, or career opportunities.

Globally, this is a growing trend and a popular one at that, so there are many charity foundations that focus on these kinds of activities. And the level of social accountability and awareness is growing.”

Elina Valeeva, formerly a business consultant and now founder of the AI assistance service Meditivity and ambassador for Women in Tech, spoke about the common errors made by fledgling startup founders and the ways to avoid them. Nick Davidov, a venture investor from Silicon Valley, shared the stories of his personal highs and lows.

Efim Kolodkin, founder of the venue booking service Bash Today, touched on the intricacies of attracting one’s first investments. Manish Ranjan, a 2014 Hult Prize winner and founder of the NanoHealth digital medicine platform, spoke about his experience as a participant in the competition and using the $1,000,000 prize to launch his own startup.

All of the lectures as well as the roundtable discussion can be seen on the event’s YouTube channel.

Social entrepreneurship as a trend

All in all, it took the organizing team three months to set up the event. Everything was done by volunteers in the “by students, for students” format.

“We put together the whole plan on our own, tailor-picking activities, talk topics, and the speakers and experts. We’re immensely happy that, despite their busy schedules, our guests were able to make time for the event and share their valuable experience. The speakers and the participants alike were satisfied with the program; everyone especially appreciated the video tour of St. Petersburg which, by the way, we did on our own without any financial support. So all of our plans and designs came true in spite of any challenges imposed by the online format,” says Yulia Trishkina, the event’s head organizer.

The main goal of the Hult Prize initiative is to foster a community of students and entrepreneurs who share the principles of socially responsible business. In addition to the annual impact summits, Hult Prize supports a number of global offices run by community managers. The task of these offices is to involve as many students from as many universities as possible in the movement. In the future, the organizing team plans to continue promoting the movement, at least within ITMO University.

“We’ve got a great team here. I’m sure that we’ll be able to do anything together. But we don’t know what yet. We’re still in talks with the Hult Prize’s international team,” shares Vyacheslav Abdullaev, one of the initiators and organizers of the Impact Summit at ITMO. “Perhaps we’ll develop a leadership program here at the university. In the year that we’ve been working on Hult Prize events, we’ve learned a lot, especially where it comes to soft skills. It all took a lot of effort, but we can be proud of this project at least because it’s so massive and was made under restrictions – for students, by students. We would very much like to share that experience with others, including fellow students, as I’m sure it’ll come in handy in many cases.”

The event took place with the support of the international project Twin Campus (financed by the European Union, Russia, and Finland as part of the Russia – South-East Finland Cross-border Cooperation Program) and the student project laboratory XLab.