The 11th St.Petersburg International Innovation Forum ended last week. Its participants from Russia's different regions, universities included, demonstrated their inventions in the fields of IT, security and medicine. ITMO University presented the concept of ITMO Highpark and the best startups developed by its students and staff. 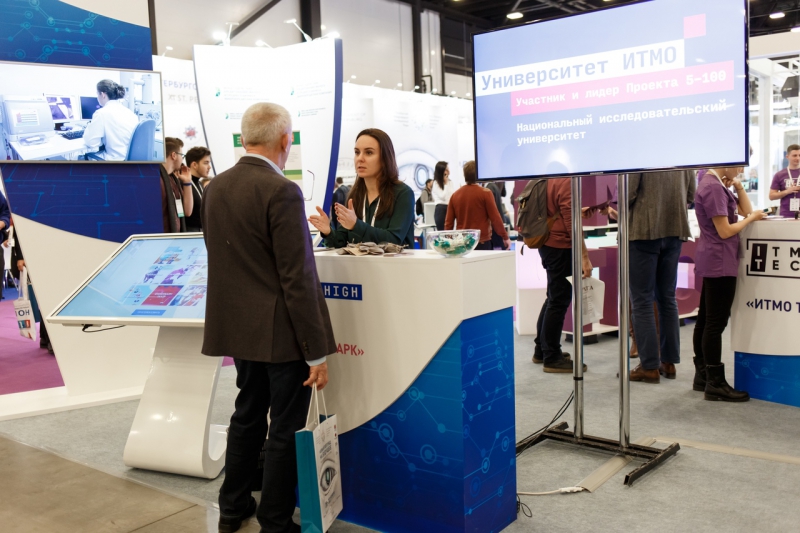 The Innovation Forum takes place every year since 2010 and is always dedicated to a particular topic. This time, it was the digital transformation of economy. At the forum's opening, St. Petersburg's stand-in governor Alexander Beglov assured the participants that the government will do everything necessary for the local hi-tech enterprises to develop and offer new jobs to the citizens.

Digital economy will drastically change the labor market, said the city’s vice-governor Sergey Movchan. In his opinion, changing one's profession and field of activities will soon become something natural. People will change their professions not some five-six times during their lives, but a lot more often. In these circumstances, every person will spend their whole life learning new things, and will always be motivated to gain new skills and information.

At the event, ITMO University presented the program of its Institute of Entrepreneurship. According to Rector Vladimir Vasilyev, a modern university's development implies having not just an academic, but also an entrepreneurial aspect. This was not the first time that ITMO University took part in the forum. Each year, it presents new projects at this event. This time, these were the project of ITMO Highpark campus in the Yuzhny Satellite town of St. Petersburg and new inventions by startups developed under the aegis of ITMO.TECH.

Among them were the MetaCoil company with an alternative to regular RF coils based on an original concept of using metamaterials, flexible organic solar cells developed by ITMO's Engineering Center, the HAKORA augmented reality platform, the HORUM project (education in VR based on 3D content), GOROBO children's robotics club (exclusive educational programs that make use of an original 3D printer), Foyt (high-energy cocktail that can replace a proper meal) and TuSion, an application and cloud platform for improving employees' efficiency and relieving stress by using the neurofeedback technology.

Biometry is the future

The award ceremony of the contest for best innovative projects conducted by the Government of St. Petersburg also took place at the forum.

The Vizier software suite for biometric facial recognition by Speech Technology Center won the first prize in the "Best innovative product in the field of IT and radioelectronics" category. The solution is being used at over 10 stadiums, four airports and six railway stations in Russia. If a person is restrained from coming to stadiums by injunction, for hooliganism, for instance, their photo is included in the blacklist. At any attempt to enter a stadium, such a person will be detected by cameras, the ticket gate will be blocked, and the security service will get a notification.

The company's representatives note that now is the best time for participating in such contests. Having certified Vizier for the purposes of transport security, its developers saw its great potential for being used in Smart City projects. For example, facial recognition technologies are already being used in St. Petersburg.

"Our biometric facial recognition system is predominantly aimed at ensuring security and creating a comfortable environment for the citizens. We are happy to be able to contribute to the global transformation of St. Petersburg, and we spend much time on improving its citizens' comfort," comments Andrey Khrulev from the Speech Technology Center.

ITMO Master's students also work on STC's projects: seven years ago, the organization launched an affiliated department with a focus on speech information systems. You can read more on joint projects by ITMO and the Speech Technology Center here.

The second place in the "Best innovative product in the field of IT and radioelectronics" category went to the mobile gravimeter Chekan-AM’s model Shelf-E developed by Concern CSRI Elektropribor Jsc. The device can do different measurements for resource-extracting companies. It can be used in the search and exploitation of oil and gas reservoirs and definition of the outer limits of continental shelves.

Among the other winners in this category was a solution for the petroleum and power industries, the MSKU-6000 system developed by Sistem-Service research and production company. It is now being introduced at the associated enterprises for the automation of technological equipment.