Each year, over 650,000 Russians fall victim to cancer. But despite these overwhelming figures, there’s no shared understanding of what a patient should do in their specific condition. That makes their struggle all the more difficult to navigate, leaving them no clue as to where they should go, what they should do, and to whom they should turn for help. So people resort to the internet, but its advice is often far from trustworthy. To address the issue, the Cancer Prevention Foundation has launched a consultation service Prosto Sprosit (Russian for ‘just ask’), where all user queries are answered by medical practitioners. ITMO.NEWS looks into the workings of the service and how it could help cancer sufferers. 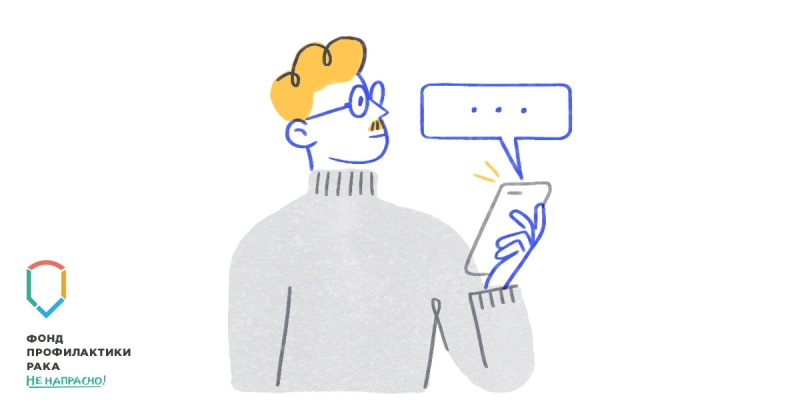 Prosto Sprosit was created for people who have been faced with a cancer diagnosis and are at loss as to where they should head to for help. The way the service operates is very straightforward. Anyone wanting to have their question answered submits their query via a special feedback form on the website. A coordinator then forwards this query to an oncologist of a relevant specialization. Among the latter are seasoned surgeons and chemotherapists, as well as graduates of the Higher School of Oncology that were recommended by the expert committee of the Cancer Prevention Foundation, ensuring that patients get help from professionals of evidence-based healthcare with a high level of expertise.

The experts don’t make a diagnosis or prescribe medications, their role is to share information that would enable patients to make the right decision.

“The service aims to help anyone concerned find their way around searching for effective diagnosis and treatment of cancer. This will allow to minimize their expenses on treatment, as well as to alleviate their fear and make the experience less nerve-wracking. And believe me, consultations such as these can not only save patients time and nerves, which are understandably often very frayed. These can also save their lives,” writes in one of his Facebook posts the director of the Cancer Prevention Foundation Ilya Fomintsev.

Yes, the consultation is completely free for all inquirers. The experts are remunerated by Prosto Sprosit, with all the money coming from charitable donations to the Cancer Prevention Foundation. All proceeds to the service itself go to pay for the experts and support of the service’s complex operational structure.

Prosto Sprosit works so long as there are donations covering the price of consultations. If this money is enough for providing 200 consultations, then 200 people will have their queries answered, provided that the latter have been filled in properly. If there’s no donations, there won’t be any consultations, as the time of oncologists, coordinators and tech support specialists does mean money.

How many queries have been processed?

According to the service’s authors, Prosto Sprosit found enormous support among both the regular public and news media. The service has been promoted by the likes of actors Irina Gorbacheva, Sergey Burunov and Dmitry Chebotarev and writer Alexander Tsypkin, who mentioned it on their blogs and social media. There are 300 queries that are being processed at this very moment, and this number grows on a daily basis. When allocations for queries end, they are put in the queue to be considered as soon as the opportunity arises.

“The first 300 consultation opportunities paid off by donations were all snapped up in a couple of days. Now we get the average of 30 queries a day,” says Alexander Borunov, head of the Prosto Sprosit project. “We did plan for a big demand prior to starting out, but the real numbers exceeded even the boldest of our projections. The service has just started working, and we’ll still have to adjust and improve it going forward. All of our consulting doctors’ schedules are full to the brim. I would only add, to the benefit of anyone thinking to apply: the better you fill out your query, the more accurate will be the answer you get.”

How did the project emerge?

The idea for the service was born out of constant appeals by cancer patients and their family members to the Cancer Prevention Foundation. The questions they were putting forward were all very different, from seeking advice on which doctor to choose and clarifications of an obscure treatment regimen, to just asking to explain what to do and where to turn if their family member got diagnosed with cancer.

“We were getting about 1,500 of such queries each year, consulting people by phone, social media and email, in our off-duty and personal hours. In the end, it became clear that the situation called for a special service. We were conscious of the fact that such a service would be very complex internally, but we made it our priority that it would be easy for ordinary people to use. It was also unquestionable that this service should be free, relying only on charitable donations to operate,” comments Polina Poleschuk, head of Profilaktika.Media, another of the Cancer Prevention Foundation’s projects, a media outlet dedicated to evidence-based medicine and oncology.

According to Polina Poleschuk, it was in the middle of summer last year that the project team realized that the main problem was people lacking comprehensive understanding of where to go and what to do should they or their loved ones be taken ill with cancer. Apart from that, it became obvious that the team should be selective of the donations they accept, refusing contributions from, as an example, medical clinics to avoid undermining the neutrality and independence of the service. It was also important to leave out all links with telemedicine to prevent people from asking to be diagnosed via the service, as it would be impossible without an in-person medical examination and other crucial procedures. This is how the idea, the concept and the name of the project took shape; Prosto Sprosit, or Just Ask.

How will the service develop in the future?

As told by the director of the Cancer Prevention Foundation Ilya Fomintsev, future plans for the service include the launch a large-scale research project on the quality of cancer treatment delivery in Russia, the development of a comprehensive information database and the creation of easy-to-understand, reliable guides for patients. The team behind Prosto Sprosit also hope to enlist the support of oncologists from other countries and involve them in the provision of consultations.

But these plans won’t become reality without a constant donation support. Prosto Sprosit aims to give free help to as many people as possible, helping them fight the disease, but it won’t be able to do so in the absence of charitable funding. You can make your donation here.