What You Need to Know About Breast Cancer: Oncologist Explains

Breast cancer is the second most common cancer in the world. Over the last years, this disease has become the most frequent cancer among Russian women. According to the statistics, 21 women out of 100 cancer patients have breast cancer. National Breast Cancer Awareness Month (NBCAM) is an annual international health campaign organized by breast cancer charities every October to increase awareness of the disease and educate people about the importance of early screenings. Founded more than 20 years ago, NBCAM now brings together hundreds of organizations from all around the world. In this interview, Vasiliy Filimonenko, an oncologist at the Scandinavia clinic in St. Petersburg, expanded on what everyone should know about this disease, how to conduct screenings, and what are the common myths about cancer. 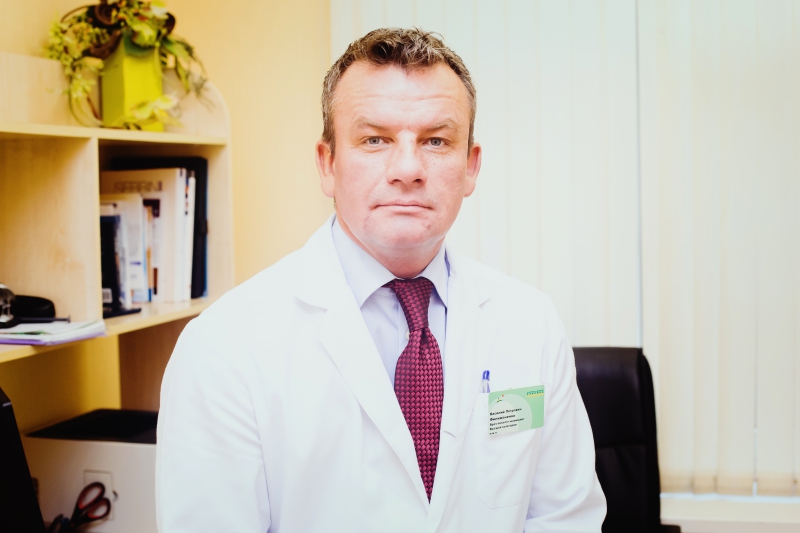 According to the WHO data, breast cancer is the most common malignancy in women. Over the last 20 years, its incidents have been steadily increasing due to a variety of reasons. What are these reasons?

Indeed, breast cancer is among the most common tumors not only in Russia but worldwide with as much as 1.5 million new cases being diagnosed each year. The exact cause of this cancer type is unknown, however, some specific risk-factors have been identified.

First of all, it should be noted that breast cancer is a hormone-sensitive cancer, which means that higher levels of certain hormones can stimulate tumor growth. Scientists believe that taking birth control pills for a long time (more than eight years) can increase breast cancer risk by 35%. Other potential risk factors include lack of childbearing, early age of first menstruation (before 12 years old), and late menopause (after 54 years old).

There is evidence that obesity also increases the risk of breast cancer, as well as other types of cancer; it is a very serious disorder that affects the whole body. Genetic mutations are yet another significant risk factor for breast cancer, as some 25% of patients are women whose relatives also had this type of cancer. The statistics indicate that in the general population, one woman in eight will develop it.

In what way is the situation in St. Petersburg different from that in Russia in general and worldwide? Are there any region-specific differences?

According to the statistics, the incidence of breast cancer is 30% higher in big cities such as Moscow, St. Petersburg, Nizhny Novgorod, etc., rather than in rural areas. It is not only because of people’s lifestyle, but also due to the fact that medical care is more accessible in big cities, which allows physicians to diagnose the disease in its early stages. As for the lifestyle, city dwellers are much more often exposed to stress and lack of sleep than their rural counterparts, which also impacts negatively on their health.

However, there are other statistics which indicate that some 91% of Russian women are aware of the dangers of breast cancer, but only 30% of women do regular checkups. Why so? Are they just lazy or are there some other reasons?

I think that it is mainly fear that stops many women from doing regular screenings; they aren’t used to it. Some women find it easier to visit a gynecologist rather than a breast physician.

Besides, many people prefer to feel like this isn’t their problem. Most of all, women go to a doctor when they’re frightened, for example, when some of their relatives or colleagues have been diagnosed with cancer. I’ve seen it many times myself. But the good thing here is that after visiting a breast physician once, many women start doing regular checkups regardless of whether or not they have any symptoms.

There are many sources that promote the benefits of self-examination. Does it really help?

In my opinion, it’s not a very effective practice, as the chances that a woman will find a tumor less than a centimeter in size are close to zero. Unfortunately, the abundance of information on the Internet results in that women might be much more likely to use traditional medicine instead of using modern health facilities. As it often happens, such women consult a doctor only when the disease is already at an advanced stage, which affects the prognosis. That’s why it is so important to conduct checkups every year.

Despite the wide availability of high-quality resources advocating for evidence-based medicine (for example, the Profilaktika.Media project which is run by ITMO University students and graduates), cancerous diseases are still surrounded by popular myths. You’ve already mentioned that yourself. How can we address this problem?

Even those patients who come to me with an already established diagnosis, don’t content themselves with information from reliable medical sources and prefer to read around the topic, so we host a lot of discussions on how accurate and adequate the data they find is. Of course, I often get statements like ‘On the Internet they say that you should treat the illness such and such’. Some people put a lot of faith into folk medicine and homeopathic remedies. One time, I spoke with a representative of a company that sells herbal supplements and swears that these can cure breast cancer. I said to him, ‘That sounds great, but what is your education background?’ He answered, ‘I am a hairdresser’. I believe that everyone should stick to what they’re good at, and we as a society will have more success in what we do.

There are lots of myths concerning cancer out there. What makes things worse is the popular fear of seeking professional medical advice. That leads to the situation when people contact us only after toying with natural remedies, at a later stage of the disease which is much more difficult to cure. But I have to note that nowadays, there’s a growing trend of caring for one’s health. The ratio of mutilating surgeries is decreasing, because this is an unacceptable outcome for women. I think that the screening programs rolled out by the company are already proving to be highly effective.

How prepared are the practitioners to communicate with the audiences who don’t have the benefit of a medical education, in a way that is accessible and easy to understand?

It’s one of the most effective forms of popularization: doctors need to communicate with people, break the problem to simple examples and explain complex information in an approachable way. We try to practice this in our clinic, too: this summer, we put out information booths on the Nevsky Prospekt and offered medical examinations to women, with some good results. I also fully support Ilya Fomintsev (a famous oncologist and head of the cancer prevention foundation Ne naprasno) and his foundation’s initiatives and am all for cooperation in this field.

What people are most afraid of is not the disease itself, but being cast away for it. Oftentimes a single talk will suffice to dispel their fears and explain the situation. If a person understands that prognosis is generally benign, they will be reassured that they won’t be forgotten or walked out on and that the doctor is ready to take responsibility for their future. Even in the course of the treatment 80% of success depends on a patient’s mindset, and practitioners have to keep it positive.

Another aspect of the complexity of oncological diseases is that they destroy our deep-seated belief in their immortality: we all understand that we’ll die someday, but this ‘someday’ is a long way away. So when a person hears a breast cancer diagnosis, this belief is crushed, and they start to perceive life in a completely different way. Sometimes, their illness motivates them to rethink their life, accept and love themselves.

When it comes to cancerophobia, it can also be said that in general, people are becoming more used to doing a medical check-up each year. They understand that in order to be active in their life and that of their loved ones, they have to know that they’re healthy.

How do examinations take place and how much time do they take?

An examination usually lasts no more than half an hour, medical consultation included. If we’re talking young women, they can only do a breast ultrasonography, while women after 40 are recommended a full mammography. After the scan is obtained, patients get a medical report and a recommendation on the frequency of future check-ups. If they experience any symptoms, for example, menstruation pain, we prescribe systemic therapy to eliminate these factors. We also talk to them to establish risks; for example, if a patient’s family member had been diagnosed with a similar disease, they can be advised on taking a genetic analysis. If we detect a mutation of the gene that is responsible for tumor risks, we endorse a magnetic resonance tomography of mammary glands. If the tumor progresses due to a genetic mutation, it is possible that a patient would be recommended a preventative mastectomy, but this is only because genetics-caused tumors are the most aggressive.

The 2018 Nobel Prize in Physiology or Medicine has been awarded to James P. Allison and Tasuku Honjo for their discovery of cancer therapy by inhibition of negative immune regulation. In essence, all the three natural-science Nobel Prizes (in physiology or medicine, physics and chemistry) recognized breakthrough findings used in biological research and medical practice. Can you tell us how practicing oncologists collaborate with scientists today? Is there a significant gap between fundamental research and practice in the field of medicine?

Evidence-based medicine is founded on the outcomes of medical research. Breast cancer is one of the most major concerns of our time because although it is one of the most researched fields in modern oncology, it still ranks first in morbidity. That’s why as soon as they emerge, scientific developments are quickly introduced to practice, after clinical tests are carried out, of course.

We have close links to both scientific programs and pharmaceutical companies, so I believe that the gap you mentioned is not that severe. Practitioners regularly participate in scientific events; for example, we host the ‘White Nights’ conference dedicated to breast cancer issues. In Russia alone, there are about ten conferences on the topic, giving us the opportunity to discuss the latest developments in our field, as well as their practical applications.

Conferences aside, we’re actively cooperating with European scientists, from Germany, Finland and Israel, for instance, and are on the constant look-out for clinical testing results of new drugs. We also work with N.N. Petrov Research Institute of Oncology.

Which promising research findings have been recently introduced to the medical practice?

We’ve already implemented the cutting-edge method of digital mammography, and genetic mutations are actively explored to detect tumors at early stages. Another key research field that is on the rise is targeted medicine. This means that drugs are developed specifically to affect a particular substrate in a tumor. Some drugs created that way have already proven their effectiveness.

In general, I think that targeted medicine and personalized approach to treatments are the future. Although the disease we fight is called ‘breast cancer’, it encompasses a large group of different tumors, and we have to take each case separately. Thanks to contemporary research in the field of molecular oncology, we identify the criteria that will allow us to come up with an effective treatment for every patient we work with.