What facilities do bike travelers need? How to create a bike-friendly environment in the border regions of Russia and Finland? And how can entrepreneurs contribute to this process? These and other questions were discussed at a workshop for the representatives of small and medium-sized businesses of the Leningrad Oblast and Southeast Finland, which took place in Vyborg. The event was organized as part of the BizCycle international project aimed at developing the bicycle tourism ecosystem in the border regions of Russia and Finland. Among the project’s partners is ITMO University. The workshop brought together entrepreneurs from the Leningrad Oblast and the Kotka-Hamina region, as well as students of several St. Petersburg’s universities. 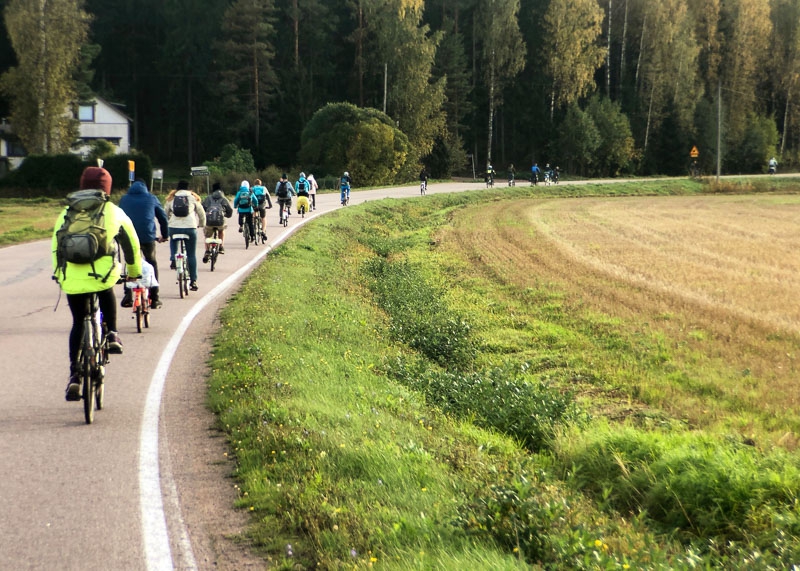 Participating as an invited speaker was Michael Kramer, a bike traveler, member of the European Parliament (2004-2019) and the European Green Party, as well as the initiator of the EuroVelo13 – Iron Curtain Trail project. This is a cycle route of over ten thousand kilometers, stretching from the Barents to the Black Sea. The main goal of this project, uniting 20 countries, is to help the cyclists visit the main historical and cultural monuments. At the workshop in Vyborg, Michael Kramer spoke in detail about the initiative, as well as talked about the experience of European countries in developing cycling routes.

Also participating in the workshop were Ilya Gurevich, Honorary Chairman of the VeloPiter Bicycle Society, who gave a lecture on how to make your business attractive for cyclists; Rimma Sachunova, Deputy Chairman of the Committee for Tourism of the Leningrad Oblast; as well as representatives of Finnish companies, for example, Ekaterina Gorelkina from the CURSOR Oy company; and Yuri Pavlov from the nonprofit organization “Department for the Development of the Transport System of St. Petersburg and Leningrad Oblast”.

Implemented as part of the 2014-2020 South-East Finland – Russia Cross-Border Cooperation program, the BizCycle project is aimed at promoting tourism and hospitality entrepreneurship through the development of the cross-border cycling and ecotourism ecosystem. The project implies the creation of itineraries and information services envisaged to help cycling tourists traverse the region in the most comfortable way possible, being catered for by the local enterprises.

The project was launched in November 2018 with ITMO University as its leading partner. The university’s specialists work on the project together with their Finnish colleagues from the Cursor Oy and Fruct Oy companies, as well as the Tourism Information Center (check out this article by ITMO.NEWS to learn more). The university’s remit includes all IT projects for the Russian side of the border, from the development of key information resources to the integration of such data to the mobile app developed by the Finnish partners.

As stated by Dmitry Muromtsev, head of the BizCycle project and ITMO’s international laboratory “Intellectual Data Processing Methods and Semantic Technologies”, the routes and IT solutions created as part of the project are aimed at real users in the field of cycling and ecotourism, who can be divided into two categories: tourists themselves and representatives of local tourism and hospitality businesses.

The first event of the project took place in December, 2018 and was aimed at both categories, whereas the main goal of the workshop in Vyborg was to attract motivated entrepreneurs interested in developing their own services in the field of cycling and ecotourism. A total of 20 small and medium-sized businesses from the Vyborg, Priozersky and Vsevolozhsky districts of the Leningrad Oblast participated in the workshop.

Apart from the workshop, Vyborg also hosted a student conference “Development of Tourist Cycling Routes”, organized by the Tourism Information Center, which brought together students of several St. Petersburg’s universities, future professionals in the field of tourism and hospitality industry: guides, developers of tourism routes and products, and entrepreneurs in the field of tourism.

“What makes BizCycle truly special is that it’s an interdisciplinary project. Thanks to the consortium, which includes representatives of different fields, we managed to attract participants interested in a wide range of topics. For example, participating in the student conference were students who are not involved in IT, but thanks to the project they can get access to our technologies,” comments Dmitry Muromtsev.

The BizCycle project is planned to last for three years. According to Dmitry Muromtsev, two partner communities fill be formed by the end of this year: a bicycle and ecotourism community, and a community of entrepreneurs, who will then test the developed IT solutions.

“After creating these communities, we will further develop our information system, test solutions for the design of routes, test a mobile app, and, of course, analyze feedback from the tourists visiting the area. We also hope that those entrepreneurs who have joined the project will lay the foundation for a bigger community of partners,” says Dmitry Muromtsev.

The development of IT solutions is scheduled for the first half of 2020, while system testing will begin next summer.