Can students organize the region’s largest startup festival? How do student entrepreneurial communities operate in Finland? And how can Finland and Russia cooperate in this field? These were the central questions of a strategic session that has recently taken place at ITMO University as part of the Startup Connect project. During the session, representatives of ITMO and South-Eastern Finland University of Applied Sciences (XAMK) shared their experiences of organizing these communities and discussed the opportunities for the development of joint initiatives in this field. 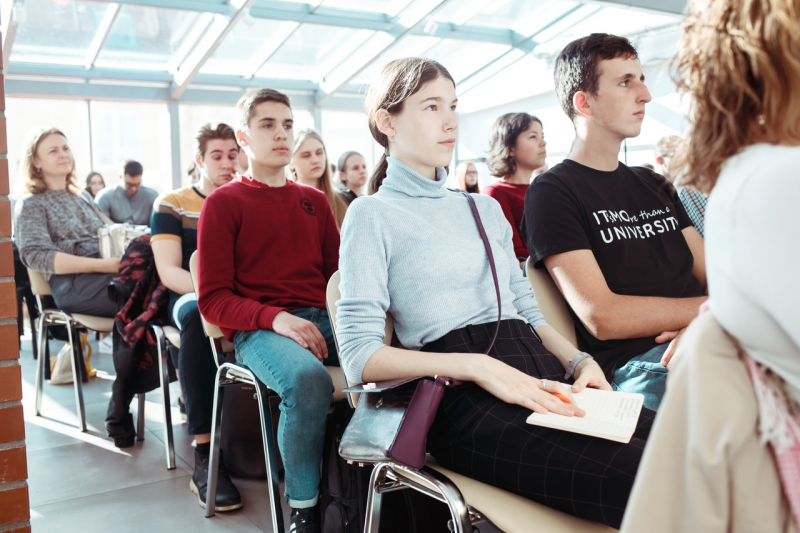 Startup Connect is a project co-funded by the European Union, the Russian Federation and the Republic of Finland as part of the 2014-2020 South-East Finland – Russia cross-border cooperation program. Implementing it is a consortium that includes Kotka-Hamina Regional Development Company Cursor Ltd., ITMO University, XAMK – South-East Finland University of Applied Sciences, and St. Petersburg Foundation for Small and Medium-Sized Enterprise Development. The initiative is designed to support startups, student entrepreneurship, as well as small and medium businesses in the cross-border region, all with the aim of forming a community of business leaders ready to enter the global market.

As part of the project, representatives of ITMO University and XAMK regularly meet to share experiences with each other. For one, this summer, a delegation consisting of ITMO University’s students and staff participated in the festival *ship, the largest startup event in South-Eastern Finland. Under the festival’s program, XAMK’s coworking space, XLab, hosted a workshop on experience exchange between student entrepreneurial communities of Russia, Finland and Estonia. During the meeting, ITMO specialists talked about their experience of supporting these communities.

In November, the representatives of XAMK made a return visit to ITMO University. On the first day, Sabine Suorsa, a manager of international entrepreneurial projects, entrepreneur and co-founder of the Patteri Entrepreneurship Society, presented a lecture to ITMO University’s students, entrepreneurs and representatives of ITMO Accelerator’s projects. In her lecture, she expanded on customer development, or in other words, how to efficiently test an idea or a prototype of a future product, as well as understand the needs of your potential customers and come up with a working solution.

Also included in the program of the visit was a strategic session during which the project’s participants discussed their experience of organizing entrepreneurial communities at their universities.

Experiences of Finland and Russia

The Patteri Entrepreneurship Society is a student community established at XAMK in 2013. It focuses on the promotion of entrepreneurial culture among students and the support of entrepreneurial projects. The Vice-President of the community, Hassib Rezai, told ITMO University students more about the project.

According to the speaker, the community organizes several specialized events, the largest one being *ship Startup Festival. This is a two-day international acceleration program for startups. The event includes two parts: mentoring programs and a pitch competition. For example, this year’s startup event in Southeast Finland brought together some 50 teams from more than 20 countries. The participants competed for the title of the best pitch project as well as the Grand Prix of €5,000. Projects were presented in five categories: Disrupt, Innovate, Entertain, Design, and Impact. The majority of projects were dedicated to the development of the urban environment, healthcare, improving the quality of life, and IT (big data and artificial intelligence).

Talking about the system of student entrepreneurial communities at ITMO University was Alena Stepanishcheva, a manager at the Student Initiatives Support Department. Today, there are over 50 different student clubs operating at the university; these are communities that focus on creative, volunteering, environmental and sports projects and the development of competencies, as well as several international clubs with active participation of international students. All in all, the student clubs organize more than 300 events each year. Alena Stepanishcheva also noted that the university offers administrative and information support, such as the provision of venues for events, help with paperwork and obtaining printed materials, photo and video services, as well as support with grant applications.

According to the project’s participants, the workshop presented them with an opportunity to familiarize themselves with their colleagues’ projects, as well as think about their development prospects.

“As we see it, the main result of today’s session was that we managed to summarize the experience of both parties related to creating and supporting student entrepreneurial communities. What is also important is that participation in this event gave us an opportunity to look into the future, understand what problems remain unsolved and what can be done to change this situation. This is why we invited our colleagues from the technological foresight department to the session as well,” comments Elena Gavrilova, head of ITMO University’s Entrepreneurship Center.

“ITMO University is our partner as part of the Startup Connect initiative. This is my first time cooperating with ITMO, but so far the work has been developing very successfully. I’m very excited by the fact that ITMO University implements largely similar projects for its students. As part of the activities of the student community Patteri, we have managed to achieve a lot of positive results. For example, every summer we host South-Eastern Finland’s largest startup festival *ship. I think that working together with ITMO University, we will have the opportunity to implement no less successful projects in the future. It would be great to organize a joint cross-border community of student entrepreneurs,” says Sabine Suorsa.

She adds that this year, there has already been one project organized as part of the Startup Connect program and this project is the Innovation Camp, which was held in the Finnish city of Kotka. Among its participants were ITMO University students who worked on real-life business cases provided by the project’s partner companies, together with XAMK students.

According to Elena Gavrilova, the Startup Connect project, set to last for two years, will include many other exciting events. Next year, representatives of ITMO University plan to organize a student camp in the spirit of the Innovation Camp that was held in Kotka, the participants of which will be able to solve real-world business cases submitted by companies. Apart from that, as part of ITMO’s 120th anniversary year celebrations, a series of hackathons will be held, with some of them also integrated in the project.

Representatives of the university also plan to participate in the next *ship startup festival. Apart from that, there’ll be the 4th international startup summer school SumIT which will take place at ITMO University next year. This year, it was held as part of Startup Connect, and next year, says Elena Gavrilova, ITMO University’s Entrepreneurship Center will carry on with this successful experience.