ITMO University offers its students a lot of opportunities for participation in international projects conducted together with the university’s partners. In April 2019, the first round of the InnoCamp project took place in Kouvola (Finland), during which Russian and Finnish students worked together on real-life cases and helped industrial companies develop their business strategies. However, the InnoCamp educational program doesn’t end there and will continue throughout the year. 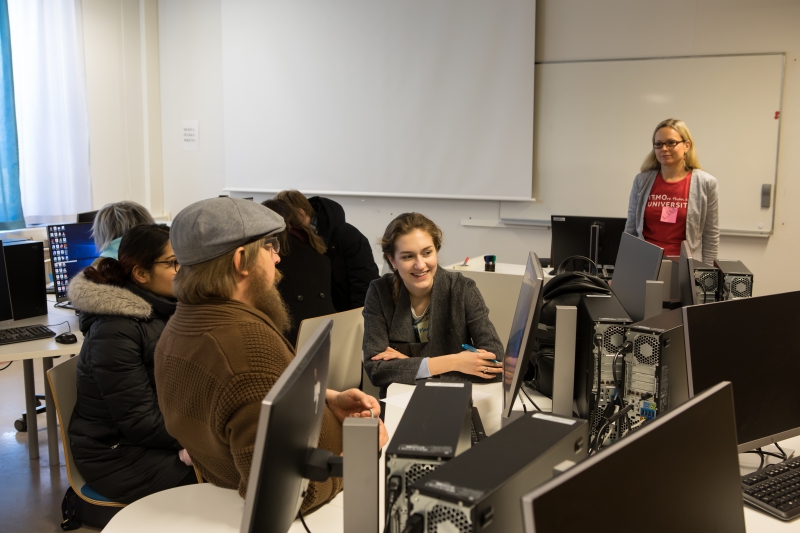 InnoCamp is a revolutionary learning program organized in collaboration with the Startup Connect project, which is part of the South-East Finland-Russia Cross-Border Cooperation Program. The program brings together several companies and students of ITMO University and South-Eastern Finland University of Applied Sciences for an intensive one-week boot camp experience. It will challenge all its participants to come up with innovative solutions and turn them into real business cases.

The Startup Connect project is designed for three target groups: students, SMEs, and the entrepreneurship support infrastructure. Among the main partners of the event are big corporations. The first part of the initiative was aimed at the students of two universities: ITMO University and South-Eastern Finland University of Applied Sciences. The kick-off event took place in Kouvola on April 3-4; the participants had a chance to communicate with each other and familiarize themselves with the cases provided by the project’s industrial partners, among which are the public authorities of Vyborg, Kotka, and Helsinki, as well as the Pyhtää airport and the Amarant company.

A total of 24 students took part in the first round of the project (12 from each university). Among the mentors were Erik Kristiansen, a Danish entrepreneur, Dr. Neal Hartman, a senior lecturer in Managerial Communication at the MIT Sloan School of Management, Dr. Shai Vyakarman, the former director of the Bettany Center for Entrepreneurship at Cranfield, Sabine Suorsa, a lecturer at South-Eastern Finland University of Applied Sciences, and Elena Gavrilova, the head of the Entrepreneurship Center at ITMO university.

Apart from the educational activities, the program’s participants had an opportunity to take part in a range of team-building and cultural events. One of the tasks, for example, was to draw a coat of arms.

“Each participant was asked to draw something they like and can do well so that it would reflect their background,” shares InnoCamp’s participant Leoandris Martinez-Serrano. I drew Maxwell’s, Newton’s and Einstein’s equations. I think that it’s a very useful task as it gives participants a chance to introduce themselves and learn about others at the same time, which is crucial for effective teamwork.”

According to another InnoCamp participant Almira Dilhukhametova, the workshops and other events with the mentors helped the participants to start thinking outside of the box and develop a comprehensive approach to the creation of ideas. One of the lectures in design thinking was dedicated to the transition from an idea to its implementation, as well as the problems one faces when working on their own project.

“The kick-off meeting was a major success,” shares Elena Gavrilova, the head of the Entrepreneurship Center at ITMO University and one of the project’s coordinators. “Though for many students, it was not the first time they participated in such international educational programs, they all noted a very high level of expertise of the mentors, combined with interesting cases and well-established communication with the project’s industrial partners. What is also important is that apart from acquiring new knowledge and developing new skills, students will get a chance to work on their own projects, make new friends and establish useful connections.”

The students will defend the projects they developed as part of the camp before a panel of corporate partners, following the results of which they will be able to take part in internships or even join the companies submitting their cases for InnoCamp. The cases presented this year were many and varied. For example, the Amarant company offered the participants to develop a new website for the company’s future launch on the European market, while the Pyhtää airport tasked them with presenting a strategic vision of how their old hangar could be used as a new laboratory and platform for local startups. In the course of a month, the students will work on their projects in teams, while communicating with the mentors and watching online lectures on such topics as defining your target audience and business modeling.

The participants of InnoCamp will present the results of their projects during the second round of the camp, which will be held on May 12-17. The Startup Connect international project is implemented as part of the 2014-2020 South-East Finland-Russia Cross-Border Cooperation Program on funding provided by the Russian Federation and the European Union.