In the beginning of August 2019, students and staff of ITMO University took part in *ship, a major startup event in South-East Finland, as part of the Finland-Russia cross-border cooperation program’s project Startup Connect. This year’s event brought together 50 teams from more than 20 countries. Keep reading to find out what participants from ITMO University have to say about their experience sharing expertise with colleagues from abroad. 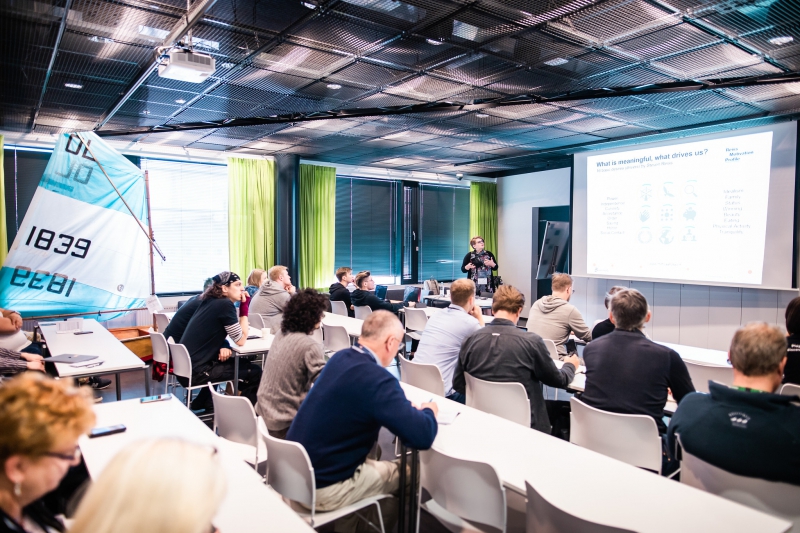 *ship Startup Festival is a two-day international acceleration program made up of two sections: a series of mentorship programs and a pitch competition. This year, 50 teams from more than 20 countries competed with each other for a grand prize of €5,000. Projects could be entered in one of five categories: Disrupt, Innovate, Entertain, Design, and Impact. The majority of projects were focused on urban development, healthcare and quality of life, and IT.A group of students and staff members represented ITMO University at the festival. Their trip took place as part of the project Startup Connect, which provides support to startups, entrepreneurs, and small and medium businesses and helps them establish cross-border partnerships in Russia and Finland. In addition to ITMO University, the project collaborates with the South-East Finland University of Applied Sciences (XAMK), Kotka-Hamina Regional Development Company Cursor, and the St. Petersburg Foundation for Small and Medium-Sized Enterprise Development. Students, startups, and small innovative enterprises (SIEs) that take part in the project receive funding from the European Union, Russian Federation, and Finland as part of the 2014-2020 South-East Finland – Russia cross-border cooperation program.

A workshop focused on the exchange of experience between the entrepreneurial communities of Russia, Finland, and Estonia took place as part of the *ship festival at XAMK University’s coworking space XLab. At the workshop, Igor Kuprienko, the head of ITMO’s Center for Project Development, and I, along with volunteers from ITMO, shared our experience of supporting entrepreneurship at the University. We’ve spoken about the work done by our Entrepreneurship Center, the Faculty of Technological Management and Innovations, our acceleration program, the Startup Thesis initiative, and others.

In attendance were representatives of incubation and acceleration programs and students’ entrepreneurial communities from Laurea University of Applied Sciences, Tartu Science Park, the Kiuas Accelerator, the cities of Kuopio and Tampere, and the accelerator Boost. They were invited by the partners of our international summer startup school SumIT, which is going to take place on August 19-30 at ITMO University’s Entrepreneurship Center. Exploring the processes of creating and operating such communities is one of the areas of focus for Startup Connect. The workshop itself was initiated by Adams Kerosi, an Ethiopian MBA student at XAMK who studies this subject as part of his thesis. We’d like to carry out a similar study here in Russia with the involvement of an ITMO student.

Nine startup teams from Russia joined us at Startup Connect. One of them, Mishka AI, landed in third place during the competition at *ship. ITMO University’s projects NeuroScanner, ToporAuto, and DragonFly entered the semi-finals of the competition. In order to ensure total objectivity, no staff members of Startup Connect’s partner organizations took part in assessing the teams’ projects.

The event itself is not very crowded in terms of the number of participants and invited experts. The expert line-up tends to be about the same each year. In my opinion, Russian startups have some difficulty attracting the attention of international (Finnish) investors, and especially winning a Finnish competition. Projects from Russia have now gotten into the final round twice, and they tend to perform better than most of their competitors. Three years ago I brought a few of ITMO University’s projects to *ship, and one of them, KickCity, got into the final round, but no one has yet to claim the 5,000 euros prize.

This year’s Russian participants noted that they’re taking part in the competition with the goal of entering the Finnish market. Projects shown at the competition are becoming more sophisticated, but the organizing team’s logic is still not quite clear to me: projects of varying levels of completion, from bare ideas to ones making their first sales, vie alongside each other in the competition and its final round.

I took part in designing a concept of the development of student entrepreneurship at the University; notably, we did not limit ourselves just to universities that are part of the cross-border cooperation program. And it’s not just universities that are expressing an interest in developing entrepreneurship among students, but members of the participating regions’ business support infrastructure, too. Our Finnish partners noted that their students aren’t always interested in launching their own businesses because they find it a difficult task. Part of our discussion concerned the ways in which we may encourage students to become involved in entrepreneurial activity.

As I spoke about the ways in which we at ITMO University help our students do that, it became evident that our experience is quite progressive. I noted that the involvement of successful entrepreneurs is a key method of making students interested in business. I spoke, for instance, of the time Oleg Tinkov came to the University – the place was packed. In our Finnish colleagues’ experience, attracting these kinds of rockstar businesspeople can sometimes be a challenge.

I also spoke about the Startup Thesis initiative that we’ve launched in collaboration with the Faculty of Technological Management and Innovations, which drew the interest of Finnish universities. Another topic was the introduction of general courses on entrepreneurship for all students. When properly presented and focused on the key aspects – initial development and fundraising – these courses produce actual results in the form of business proposals at the very least. One such example is Yury Loshenko’s surgery training robot.

The festival included a competition for Russian and Finnish companies, in which the Russian team Mishka AI was named the top winner. This project will now be featured at Slush, the world’s largest startup festival. Their product is a toy bear that speaks to its owner and gives them hints on what to do, like brushing their teeth or going to bed. It uses elements of artificial intelligence and connects to a server in order to determine the best course of action for each specific situation.

Ilya Ardabyevskiy, student at the Faculty of Applied Optics

I volunteered at several international conferences and forums held at ITMO University in the past academic year. I was quick to react to the call for volunteers, as tech startups have been an interest of mine for a while. It’s one thing to read about it and watch things unfold online, but it’s another to attend pitch sessions in person, talk to founders, and gain public speaking experience, which is why I was eager to apply.

Volunteering at *ship was a unique experience for me. Our role there was something of a mix between a volunteer, organizer, and a guest. We helped prepare the badges and swag bags for the participants, built two large stands on the stage, and attended pitch sessions and workshops. We also took part in a meeting of Finnish, Estonian, and Russian entrepreneurial communities where the participants discussed how to establish a comfortable environment for startups and learn from each other’s experiences.

The only time we were on a tight schedule was two days before the event when we worked at the Maritime Centre Vellamo’s workshop. On the other days, we were in touch with the organizing team and helped them out when necessary.

It was interesting to see how things work from the inside, meet the team, and get to work in an international team. I hope that I will soon get the opportunity to attend *ship as either an organizer or a participant.

Ekaterina Kostroma, PhD student at the Faculty of Control Systems and Robotics

I’d been volunteering before it became mainstream – since 2011, in Yekaterinburg. Our city has a massive volunteer community, and our team organized major events such as the 2013 Summer Universiade, the 2014 Olympics, the International Industrial Trade Fair INNOPROM, and many more. Volunteering is a perfect opportunity for young people to learn how the system works from the inside and contribute to something meaningful.

I’ve been keeping track of the South-East Finland – Russia program, as it is one of the most interesting cross-border collaboration projects. I’m also a fan of the Finns’ policies in regard to regional development. My focus is innovations and intellectual property. A couple of years back I, too, was part of a startup that developed fiberglass construction stilts and won funding at the Innoprom Fair, so it was interesting to learn which types of projects are popular these days, how the industry has changed, and how international events function; after all, the target audience here is different and so is the scale of funding. Finland has a well-developed project support system and is home to Slush, the world’s largest startup festival. According to stats, their startups are some of the most successful in Europe. There’s a lot to be learned here.

We spent a week in Finland, and the festival went on for three days. Most of the matters were taken care of by the organizers. Several days before the event were the most intense, and we worked full days helping to organize the festival. During the festival itself, our schedule was quite lax: we helped out with some things but overall had the opportunity to walk about and attend pitch sessions.

There weren’t really any difficulties. There were open, welcoming people on the Russian and the Finnish sides who knew what was expected of us. It was a pleasure to take part in a dinner organized by the sponsors and take a boat trip around Kotka Island. My advice to future volunteers would be this: practice your English and bring a windbreaker – the weather in Kotka is just as fickle as it is in St. Petersburg.