For the third time in a row, ITMO University’s Entrepreneurship Center organizes the SumIT international summer startup school. This year, SumIT is held as part of the StartUp Connect cross-border cooperation program. That’s why the program was, first and foremost, aimed at students from ITMO University and Häme University of Applied Sciences (HAMK University), Finland. Also participating are students from Finland, China and Bangladesh, as well as experts from the Entrepreneurship Center and businesspeople. 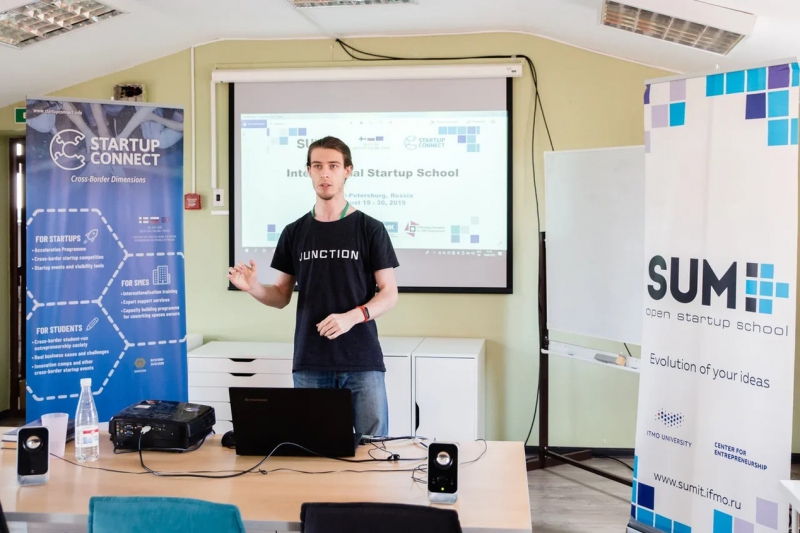 The program of the course is designed for two weeks. During this time, participants of the startup school will immerse themselves into the forefront of marketing and financial technologies, from making business plans to giving product presentations.

“This year, ITMO University has presented as many as four startup projects. Unfortunately, there are no entrepreneurs from HAMK participating, but there are three wonderful volunteers whose task will be to help participants of the school. The main emphasis is placed on the fact that the volunteers are students with certain professional competencies that our entrepreneurs may find useful. For example, a student from Finland, Hannah, is a designer, so she can help participants with logos, website design, and presentations. In the same fashion, someone will help them with programming, and so on,” explains Elena Gavrilova, head of ITMO University’s Entrepreneurship Center.

The summer school started with an opening ceremony, where its participants shared about themselves and their projects. They presented the prototypes of their startups that they are going to develop in the course of the coming two weeks.

“At the end of last year, my friend and I came up with a startup called “Thank you”. It is an ecosystem for street musicians, made of three components: first, each musician or music band gets an individual QR code. Using this QR code, they can receive money from their listeners via Apple Pay or Google Pay without entering a credit card number. Another component is an online mapping system, which shows the musicians’ location. And finally, an algorithm that works as a ranking system,” shares Ivan Gribin, one of the school’s participants.

The startupers plan to get a percentage from each transaction. They are now looking for a solution that would allow them not to spend most of the earned money on taxes.

“We see our participation in SumIT as an opportunity to hone our presentation skills in a foreign language. The thing is that this November we’re going to Portugal to participate in Web Summit, and this skill will definitely come in handy,” adds Ivan.

“I have time and interest, and that’s why I decided to take part in SumIT. I don’t have much work to do at the laboratory right now as everyone’s on vacation, so I applied for participation in the summer school as a volunteer. For me, it’s a great opportunity to communicate with experts and representatives of the industry, which is very useful for me as I graduate from university next year. Apart from that, I’m just interested in how startups are developed in Russia. I like all the four projects presented at the summer school. They’re all very cool. Most of all, I like the project aimed at helping street musicians get their donations. I think that, first and foremost, it’s not about money but about giving people a chance to support their heroes,” shared Tianmiao Zhang, a student at ITMO’s Faculty of Photonics and Optical Information.

After two weeks of workshops and communication with experts, participants will present their startups to investors and businesspeople. This will give them an opportunity to get funding and find potential clients. However, the main goal of the school is to help people establish useful connections and partnerships.