In 2019, Pavel Rybalchenko completed ITMO’s State Information Systems Management Master’s program. He joined the university when he was already working at St. Petersburg Information and Analytical Center that develops smart government technologies in the city. ITMO.NEWS asked  Pavel about the motivation to  get an education in the field that you’re already working in, the difference between academic and practical approaches, and the reasons why the demand for young urban scientists and specialists in e-governance won’t cease anytime soon. Starting this year, the specialization State Information Systems Management has become a part of the Smart Cities and Urban Studies Master’s program. 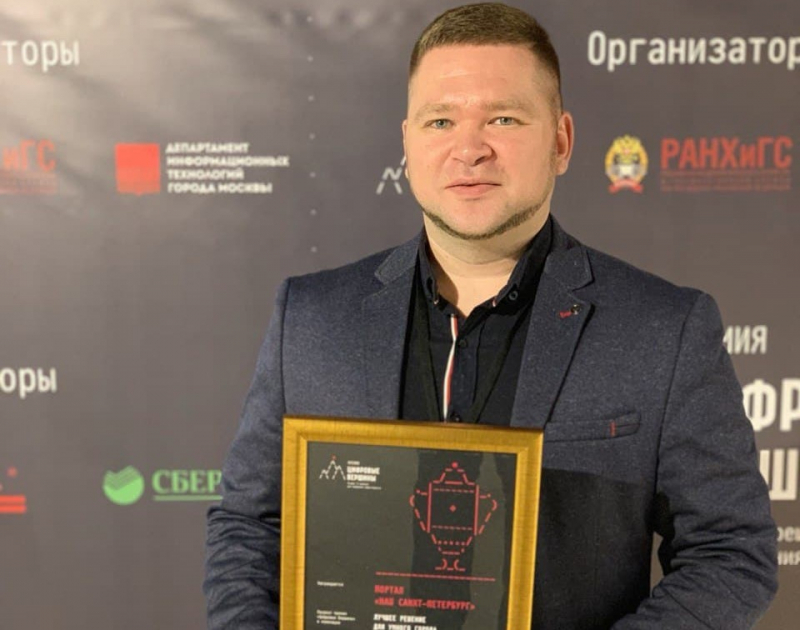 You came to study at ITMO’s Institute of Design and Urban Studies when you had already been working in your field for several years. Why?

I joined ITMO in 2017. This was no accident; at that time, I had already known about this university thanks to my work at St. Petersburg Information and Analytical Center. We first reached out to ITMO it in 2014 during the development of the Our St. Petersburg webportal, when we asked Vladimir Chugunov and his colleagues to act as experts.

After that, we got actively involved in working with students of the State Information Systems Management Master’s program: we organized internships at our center and held joint study sessions. It was then that I understood that it would’ve been good to augment my basic education. I got my first degree quite a long time ago, in 2005 at St. Petersburg State Marine Technical University. On the whole, I decided to take a look at the world of information technologies and e-participation not just from  the practical standpoint but also from the viewpoint of science. When I got the time, I applied for the Master’s program.

Were the entrance exams hard for you?

I’d like to lie, but I won’t (laughs). No, surely not. I completed the entrance exams almost without any preparation, only thanks to the experience that I already had.

How was it – becoming a university student knowing that all of your peers are probably younger than you?

I was absolutely comfortable with being a student again, no difficulties. But you’re right, my peers were at least five years younger than me. Nevertheless, we easily found common ground, some of them now work with me at St. Petersburg Information and Analytical Center.

How did you combine work and studies?

They complemented each other perfectly. Surely, I didn’t always get perfect marks, but I never had any problems. More so, the knowledge I already had helped me complete certain assignments without the help of recommended reading materials, simply based on the experience I had.

Did your classes ever cover real-life cases from your experience at the center?

Practically every lesson involves a real case. This is why we had many examples from my work, as well. By the way, this gives a different perspective on routine tasks. Thanks to that, you can get a better understanding of the ways to optimize this routine and improve some things in accordance with scientific methods.

And was there anything that you’ve brought from ITMO to your work?

Surely. For example, being a student, I came up with an analytical subsystem for the Our St. Petersburg portal with the help of the program’s lecturers. The subsystem helps to not just gather data on some negative events, like emergencies in the field of housing and public utilities, but also analyse this data. This information is used to predict emergency situations in the future, with regard to external and internal factors, and that helps to take preventive action.

All of this was done based on ITMO University’s research, and a non-standard approach to solving routine tasks. You see, most developers believe that everything has already been invented for them, and their task is to use mundane designs and work with the interface. But there are many more opportunities, as I was shown at the Master’s program.

Was there anything else?

Yes. For example, I came up with the “five whys” principle. Before solving any problem, you need to ask, “why did it emerge?”. When you find the reason, ask again, “why did the situation that caused it emerge?”. Do that five times, until you find the origin of the problem.

Studying at the Institute of Design and Urban Studies is not only about getting acquainted with statistics and big data, but also about sociology and analysis of the public opinion. Did it help you in your work?

Yes, I had such an experience in the course of my studies. I remember a case: we discussed the audience of people who are involved in e-participation, i.e. leave requests for solving specific problems via the Our St. Petersburg portal and take part in polls on similar resources. Sociologists gave me a new perspective of this issue. The created generalized profiles of our users and categorized them.

For instance, they noted that there are “superusers” who report dozens of issues, then there are those who just write about what they notice while going along their usual route from home to work. There are also the least active users who leave only a couple of requests in their whole lives. And in order to understand the citizens’ demands, taking some average value is not enough. When analyzing requests, it’s important to mind this and exclude the most active and the least active users from the selection. Then again, it’s also necessary to remember that some “superusers” are not simply hyperactive but collect requests from their neighbors or members of their community. So they represent the attitude of a whole group of people towards specific urban issues.

Can you tell us more about St. Petersburg Information and Analytical Center?

Our center focuses on the development, implementation, and support of e-governance methods – webpages and information systems that let citizens communicate with the authorities not by mail, phone calls, or  personal appointments with officials, but with the help of modern technologies and new opportunities.

Have any of your colleagues got inspired by your example and decided to apply for a Master’s program at ITMO?

Actually, many of them already study or get additional training at ITMO. You could say that this is an up and running process. Everyone who wants to learn, goes for a Master’s program, it’s easier for them to enroll thanks to the experience and knowledge they get at their work on a daily basis.

You said some of your groupmates at the Master’s program eventually went to work at St. Petersburg Information and Analytical Center. Are you still hiring?

We certainly are, and not just at our center, but also at similar establishments in other regions. A digital transformation program has been launched in Russia, and training new personnel is an important part of it.

In our work, any new idea that can help improve the mechanisms of e-governance and make the interaction of citizens and authorities more comfortable is relevant. For this reason, we gladly involve new specialists with a fresh perspective on things. And the Institute of Design and Urban Studies acts as a talent factory.