On August 31, to mark the start of a new academic year, ITMO University hosted ITMO.GO, a large-scale celebration that brought together students, lecturers, staff, graduates, partners and friends of ITMO. During the event, over 4,000 first-year students of Bachelor’s, Master’s and PhD programs were officially welcomed into ITMO.FAMILY. At the celebration, they had an opportunity to learn more about the first days of their studies, take a fun photo with an A+ gradebook for luck, and also play chess, do some rowing or have a go at table hockey. Apart from that, the festivity marked the start of ITMO University’s 120th anniversary year celebrations, opened by Rector Vladimir Vasilyev. 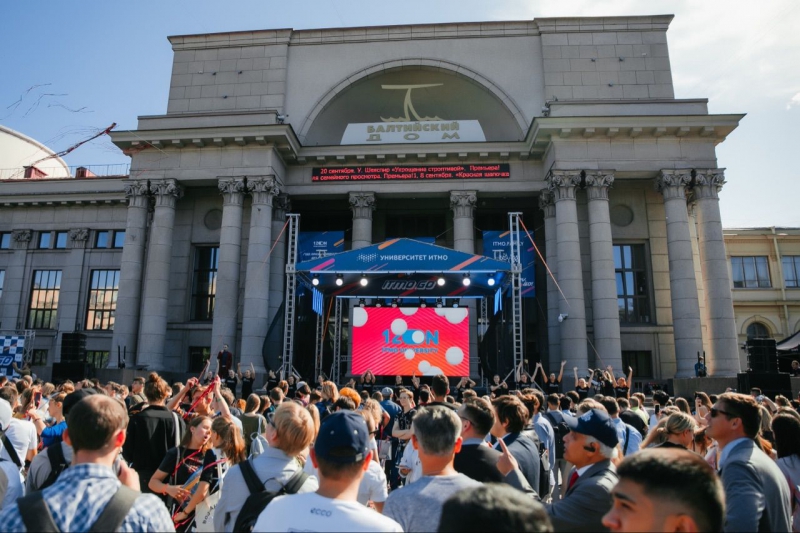 As per the tradition, ITMO.GO took place in the square in front of the Baltic House theater in Alexandrovsky park, bringing together first-year students, staff and administration of ITMO University. First Vice Rector Daria Kozlova congratulated the participants on their successful enrollment and spoke about all the exciting opportunities that await them in their studies.

“This is your time to study, dream, come up with new ideas, make mistakes and move forward, unite in teams and walk from one city center campus to another taking in the breathtaking views of St. Petersburg. The entire ITMO University team will do this with you. We are going to develop ourselves, make progress, gain new experience and change ITMO and the world around for the better, together. To help you wrap your head around all the opportunities that you have at ITMO University, we are organizing Introduction Days on September 2-3. Each of you will explore lots of sections and stations to find out how to go on an international exchange, what’s so important about soft skills, how to start your own student club and what is Yagodnoe,” said Daria Kozlova.

ITMO University Rector Vladimir Vasilyev also gave a welcome address, this time in a video format. He proclaimed ITMO.GO the start of ITMO University’s 120th anniversary year celebrations, which will include a wide range of events, concluding in June 2020 at a large-scale graduation ceremony in Sibur Arena. ITMO.GO included a special information zone “Alumni”, where graduates could learn about what’s in store for them in the coming ITMO 120th anniversary year.

“Alumni” was one of the many information zones set up at the event. For one, the ITMO INTERNATIONAL stand walked the participants through international exchanges for ITMO students, the KRONBARS stand provided an opportunity to sign up for exciting sports clubs, and the ASK ME zone was aimed at answering all the questions first-year students might have.

Specially for those who’d already acquired all the information necessary, the event included an interactive zone where guests could play chess, do some rowing on KronBars training equipment or cross swords in a game of table hockey. There was also a special photozone starring a giant A+ student gradebook, while general photos were made by a drone documenting the celebration from above. All these activities were complemented by a concert program featuring ITMO students and graduates, as well as the KronBars cheerleading team.

We asked the participants of the celebration about why they chose ITMO University, what programs they enrolled in, and what their plans for the future are.

Why did I choose ITMO University? In fact, it’s ITMO that chose me, as I entered the university via the ITMO.STARS program. To get admitted, I had to present my own project that I’d worked on in the course of several years: video games using augmented reality. For example, in 2017, I launched StalkerGo, where I combined the key ideas from Pokemon Go and Stalker. Your task as a player is to find artifacts, while the gameplay is influenced by various sound and light sensors, and a compass.

In the future, I plan to become an Android developer; that’s why I entered the educational program “Mobile Network Technologies”. I hope to meet my future colleagues at ITMO University. I like the people here and I also like how much attention is paid to students’ projects. I would really like to find like-minded people here to bring our ideas into life and work on new developments together.

A long time ago, when I was in my sixth or seventh grade, I participated in a programming competition. I really enjoyed it and promised myself to enter ITMO University when I grow up. Over the past years, I’ve taken part in the NTI and CTF competitions, which helped me join ITMO’s Faculty of Secure Information Technologies via the ITMO.STARS program.

As for my plans for the future, I’d like to become a technological entrepreneur. I like this professional field for its lack of limitations: it’s up to you what you want to do with your career, what people to invite to your team, which investors to attract and what risks to take. It’s difficult but extremely interesting. It opens up a world of opportunities for you and it’s so exciting.

If I decide to continue my education as a Master’s student, it will definitely be a program in urban studies. My global goal is to build the first smart city, at least to try. To bring these ideas into life, one has to understand how cities are built and developed and how these processes can be modernized. This is when my expertise in urban planning will come in handy.

Elizaveta: I joined the program “Computer Technologies in Design”, because modern technologies are gaining momentum now, and I like drawing and would like to do something creative. What also affected my decision is the fact that my elder sister works at a company that specializes in visualization of architecture, interiors and exteriors. In the future, I’d really like to work together with her.

Sofia: I like web design. In my opinion, this field is not as properly developed in Russia as it is abroad, and there are not so many educational programs focusing on it. ITMO University is one of the few Russian universities where I can work in this direction. That’s why I chose it and want to study here.