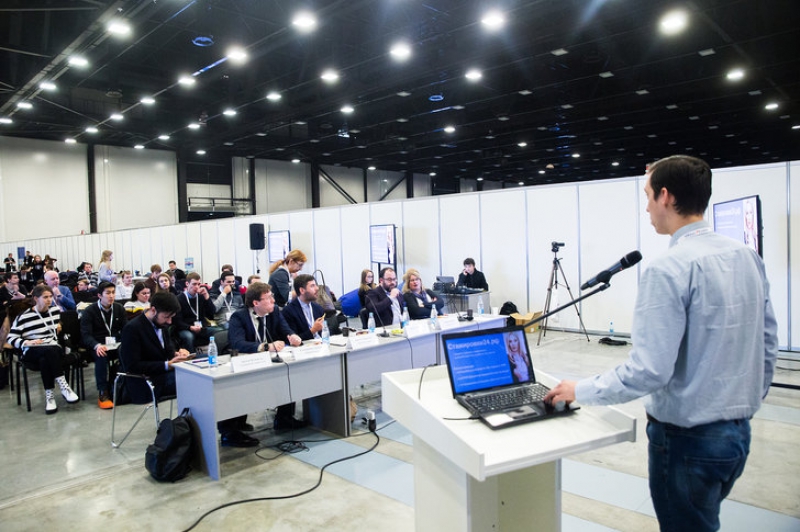 Contestants had two days to turn their ideas into working prototypes and present them to potential employers and customers. Each team was supported by a mentor provided by one of the organizing companies. Participants also consulted with specialists from the Federal Service for Employment and Labor (RosTrud), who shared a great deal of data with the teams.

The jury for the hackathon included Andrew Spence, a British expert on HRTech, AI Blockchain and FutureOfWork, Artem Kumpel, founder of ITMozg and CEO of Severgroup Talent Tech, Nikita Cherkasenko, head of department of staff assessment, training and development at Rostelecom, Andrei Elonyshev, head of development and research at the Digital Design training center, and Irina Anisimova, deputy head of IT Projects for Labour and Employment Office at RosTrud.

Representatives of ITMO University also participated in the hackathon. Team Tardis was presented by Daniil Abrashin, a PhD student at ITMO’s Department of Financial Management and Audit. He demonstrated the concept for an app that presents employees’ achievements in a game format. It is centered around a virtual player character who develops and gains experience points as the employee completes tasks and achieves results. The concept also includes a ranking of employees. According to Daniil Abrashin, the application can be used anywhere, but the developers’ chosen entry point on the market is the IT industry, as it is the most flexible and welcoming towards innovation.

Daniil plans to commercialize the project through paid subscriptions. Importantly, the app itself is not just a way to monitor the employees’ performances, but to also search for new staff. In the future, developers plan to add a ranking of employers.

Members of the team “Braille Script” further developed their idea from HACKATHON 2025. Oleg Busel and Emil Sataev’s project is the prototype for an end-to-end app for employers and employees.

“What makes end-to-end systems special is that any two interested parties can interact without an intermediary – which is how Uber, Tinder and others operate these days. Our prototype is based on the same principle,” – explains team member Oleg Busel.

To use the app, an HR manager can sign up, create a job description and publish it for a fee (this is the only stage of the chain that is monetized). Job seekers, for their part, sign up, upload a CV or export it from another online job platform – like HeadHunter.

Another important feature is the game/test all job seekers complete. Its purpose is to evaluate the user’s soft skills level using approximately 160 questions. Developers used linear regression to reveal connections between the users’ behavior in the game and their real-life skills. The test helps evaluate their level of involvement, adaptability, openness and other qualities.

Having filled out their profile, job seekers can browse a list of companies, containing short job descriptions and salaries. Upon choosing something they like, they can examine it in more detail. Companies, meanwhile, can visit candidates’ profiles and see their test results, job records for the past two years and their preferred salary. Having made their choice, employers and employees can contact each other using any preferred medium – be it an online messenger, phone or syncing a meeting date to their calendars. Using machine learning to automate data collection, the project team solves the issue of having to fill out numerous forms and documents.

The Courseburg team’s idea comes from the participants’ field of work – supplementary education. The team presented a prototype of a service for finding internships and practice training venues.

“We often get calls from companies who are interested in our graduates. We’re tired of having to tell them off, and the students themselves often want to find a job without having any work experience; because of all this, we created this internship service. We realized that is something that is an issue not just for us, but for a million other people every month. For the most part, these are people with no experience looking for a job, and they need an internship or work placement. Employers either have trouble finding employees or are forced to train newcomers and “plug the holes” with temporary interns,” – explains team member Alexander Altin.

The project’s creators explain that today there needs to be a service that would bring together students or recent graduates and employers. Developers plan to aggregate relevant data on internships and let users utilize filters and categories. The project’s concept also concerns content distribution: users can only see internships in their field of work (most services today offer a chaotic list from all fields). Companies, too, see only those applicants who fit their profile – based on, for example, previous experience or desired positions.

Each team only had five minutes to present their project; in that time, they had to not only present the concept, but to demonstrate the prototype and answer questions. Projects were evaluated based on three criteria: Idea, Implementation and Presentation. The event was organized by major IT companies and state enterprises.